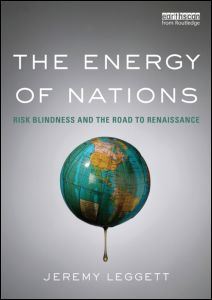 Much of Big Energy is guilty of an enculturated risk blindness that, unless action is taken, will lead to an inevitable global crash according to Jeremy Leggett.  As the World Energy Congress opens in South Korea, the man described as "Britain's most respected green energy boss" writes of wider risk-taking in energy – and financial markets, as he has seen it play out – often behind closed doors – since the oil price began its inexorable rise in 2004. Jeremy Leggett concludes that too many people across the top levels of government and business have closed their eyes and ears to systemic risk taking.

Leggett bases his conclusions in studies of human behaviour as well as an understanding of the gas and oil markets. "Brain scientists tell us we have a very worrying collective tendency for blindness to the kind of risks that can crash economies, and imperil civilisations," Leggett concludes. "The financial crisis suggests they are right. Now we need to worry that the energy industries are about to repeat the behaviour traits of the financial sector, and on multiple fronts."

In his newly published book, The Energy of Nations: Risk Blindness and the Road to Renaissance, Leggett describes four systemic risks being run by Big Energy: in climate change, in carbon-fuel asset-stranding in the capital markets (the "carbon bubble"), in shale "surprise", and in oil depletion.

In two panels on Monday 14th October, Leggett will argue:

"The global energy industry is in an institutionalised state of collective risk blindness, and is pushing the global community towards serial disaster on current course," said Leggett. "Like the banking industry, we will need a whole new generation of leaders, and companies with very different business models. This new generation will have to recognise that– as Einstein said – you don't solve huge problems with the same thinking that created them in the first place. Renewables could power modern economies within a few decades, and the potential in Asia and the Middle East is arguably even higher than the west. But the incumbency will try hard to stop us even coming close. We in the renewables industries can lead by example, and speak truth to power with courage and integrity. In doing this, we must never underestimate how deeply misguided the energy incumbency is capable of being, collectively. Or the malign power that they are exercising below the radar in the current civil war in global energy markets. Most of them will not change willingly, we know now. They must be forced to change"

Jeremy Leggett is a social entrepreneur and author. He has been an Entrepreneur of the Year at the NewEnergy Awards, a CNN Principal Voice, and is founder and chairman of renewable energy company Solarcentury, and SolarAid. He chairs the financial think tank CarbonTracker, contributes to the Guardian and the Financial Times, and is an Associate Fellow at Oxford University’s Environmental Change Institute.

Jeremy Leggett set up a solar company 13 years ago because of his fears about fossil-fuel dependency. Solarcentury, which he chairs, is today one of the most respected solar companies in the world. It set up a charity, SolarAid, with some of its profits. SolarAid's retail brand, SunnyMoney, is now Africa's number one retailer of solar lanterns.