Move over T. Rex, Rhinorex is the new King of the Dinosaurs! 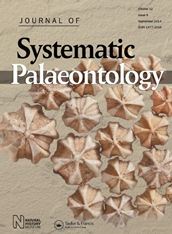 In terms of its regal name, T. rex now has a rival in Rhinorex condrupus, a new dinosaur described by US palaeontologists Terry Gates of North Carolina State University and Rodney Scheetz of Brigham Young University.
This hadrosaur is so named because of its large nose, Rhino meaning nose in Greek. Rhinorex (‘Nose king’) is a hadrosaur or duck-billed dinosaur.

Students from the University of California Riverside undertaking geological reconnaissance work in the Cretaceous rocks of Book Cliffs in Utah discovered the only known specimen in 1992. The fossil was subsequently air-lifted out of the area by the Utah National Guard.

While the limbs are missing and the bones of the body have yet to be prepared, the skull shows a unique nasal process with a fishhook-like shape (Fig.1), but it seems to lack the nasal ornamentation of other hadrosaurids. There are also fossilised impressions of the skin (Fig.2).

Evidence points to Rhinorex inhabiting a coastal environment on the edge of the Western Interior Seaway of North America during the Late Cretaceous period, about 75 million years ago.

Phylogenetic analysis performed on the specimen suggests that this fossil was closely related to the genus Gryposaurus. This was a large bipedal/quadrupedal herbivore around 9 metres long (30 ft), two species of which have been found only 250 km south-west, in southern Utah. 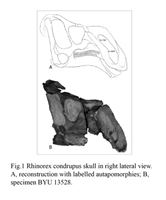