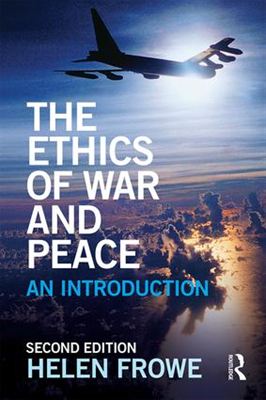 A lively introduction, The Ethics of War and Peace outlines one of the oldest but still most relevant ethical debates: the morality of war. As home secretary Theresa May vows to "systematically confront and challenge extremist ideology” while detailing new curbs on those who "spread hate"[i], this book focuses on the philosophical questions surrounding the ethics of modern war. While police estimate that at least 700 people from the UK have travelled to support terrorist organizations[ii].

Presenting contemporary just war theory in a stimulating and accessible way, The Ethics of War and Peace asks whether indefinite detention without trial is acceptable, provided that the detainees are (suspected) terrorists? And, whether or not the countries that led the way in establishing the ideal for universal human rights, are now the ones violating these rights both at home and abroad. As, 59% of respondents to a Islamic Human Rights Commission (IHRC) report believed political policies that had been implemented to counteract extremism had negatively impacted their lives[iii].

One of the foremost writers on the ethics of war, Helen Frowe here not only authoritatively explains the debates but also enters them, making original, and important contributions of her own. This new edition includes new material on weapons and technology, and humanitarian intervention, in addition to theories of self-defense and national defense, the moral status of combatants, the principle of non-combatant immunity, the nature of terrorism, and the moral status of terrorists