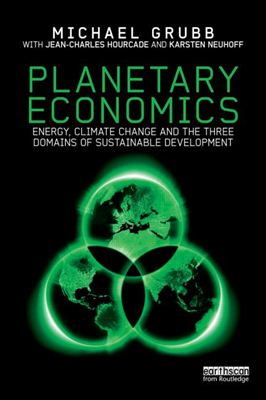 Planetary Economics, a new book by Professor Michael Grubb analyses what we have learned from twenty years of efforts to tackle global energy and environmental problems – and what we need to do differently.

Routledge released Planetary Economics, by Professor Michael Grubb with Professors Hourcade and Neuhoff, on March 21, 2014. It sets out the apparent gaps between theory and fact, and between ambition and action, in energy and climate change.  From this it analyses why progress has been so difficult and a presents a new framework to explain how the challenges can be tackled more effectively. It maps out three domains of decision-making each of which involves different actors, processes and theoretical foundations, implying three pillars of action. The book links these three domains to current debates about optimality and growth in economic systems, and the lessons from the financial crisis.

The book argues that far from competing, only packages spanning all three pillars are politically credible and stable: together the combination can change our present destructive course, and dissolve the conflict between the economy and the environment, potentially benefiting both in the process.

Professor Michael Grubb is Chair of Energy and Climate Policy at the Cambridge University Centre for Climate Change Mitigation Research, and Senior Advisor on Sustainable Energy Policy to the UK Energy Regulator Ofgem.  He is editor-in-chief of the journal Climate Policy and is on the editorial board of Energy Policy. He was recently the Specialist Advisor to a House of Lords European Committee enquiry. ‘No Country is an Energy Island: securing investment for the EU's Future' (2013).  Former positions include Chair of the research organization Climate Strategies; Chief Economist at the Carbon Trust; Professor at Imperial College London; and head of Energy and Environment at Chatham House.

Karsten Neuhoff is Department Head at the German Institute for Economic Research (DIW Berlin) and Professor at Technical University Berlin.