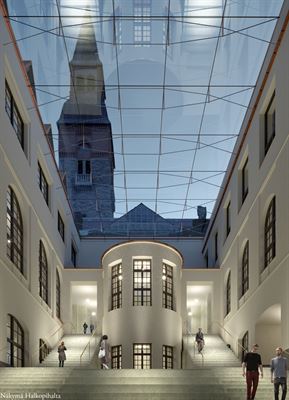 The Uusi Kansallinen (‘the New National’) architecture competition held this year sought proposals for the design of an annex to the National Museum of Finland. A total of 185 pseudonymised entries were submitted, with JKMM Architects’ work Atlas ultimately selected as the winner. The winning entry will receive a prize of EUR 80,000, with the other four works that made it to the final round of the competition sharing third place. Additionally, the competition jury decided to give out five honourable mentions and purchase two works from among the rest of the competition entires.

In their assessment, the competition jury characterised the winning entry as “noble in its overall approach” and good in regard to accessibility. ”The fact that the grand curving ceiling is visible from the underground foyer lends a wonderful mood to the interior and is excellent for visitor orientation. The entry is functionally very good, uncontrived and handsome. The foyer spaces and curving ceiling can be used for exhibitions to project their themes externally. The spaces are easily approachable and locatable.”

There were some well-known creators and offices behind the works that made it to the final round of the Uusi Kansallinen competition: Asuuri was designed by Bruno Fioretti Marquez and his working group, Haapio was the work of Lahdelma & Mahlamäki Architects, Kolme pihaa was designed by PES-Architects and Lähde was a collaborative effort between Laidun-design Oy and LPR Architects.

The winning entry will receive a prize of EUR 80,000. The shared 3rd place entries will each receive a prize of EUR 28,500, in addition to which each purchased work will receive EUR 12,500. The works that the competition jury decided to purchase are: BGD171727 by Robert Gutowski Architects Ltd. and Kätketty by BAKPAK ARCHITECTS S.L.P. Honourable mentions will be given out to the following works: HYPOGEUM (Riccardo Renzi), Syli (Tommila Architects), POP UP Uusi Kansallinen (Ricardo Cruz Recalde and Isabel Sánchez del Campo), RAPOLA (Lahdelma & Mahlamäki Architects) and Alice Peilintakamaassa (SMAR Architecture Studio).

“The annex will serve as a symbol of our contemporary understanding of national values and culture. JKMM’s beautiful work exemplifies cultural renewal and its power to effect change, while also underlining the unique architecture of the existing building. From a practical standpoint, the structure of the new spaces also corresponds to the needs of the museum’s expanding operations.”

The architecture competition for the design of an annex to the National Museum of Finland organised by the Finnish Heritage Agency, the National Museum of Finland and Senate Properties was held in 2019. The competition was public and consisted of two stages, with pseudonymised entries. Competition entries were submitted by 4 April 2019, after which the competition jury selected the works that would proceed to the final round on 11 June 2019. The aim was to design an annex to the existing museum building in Helsinki.

JKMM Architects are responsible for the design of numerous new culture, arts and science buildings such as Amos Rex museum, Think Corner of the Helsinki University and Dance House in Helsinki. The office’s working group approached the design of the 4,900-square-metre annex by refining the architecture of the existing museum building designed by Herman Gesellius, Armas Lindgren and Eliel Saarinen, which is characterised by historical references and an emphasis on the handcraft that goes into building, into something that could be realised with the contemporary methods of the art form.

”Our entry explores themes typical of our architecture, such as humanity, the character of the place and the spirit that they create together. The National Museum of Finland belongs to everyone. It contains the ingredients for the common good for everyone in Finland. This is why we wanted to create an annex to the National Museum with architecture that is easy to understand for all visitors, but also elicits a wide range of interpretations,” says main designer and one of the founding partners of JKMM Architects Samuli Miettinen.

The winning working group will now proceed to refine their competition entry into a viable sketch design in collaboration with Senate Properties and the National Museum of Finland. The development project will be organised and headed by Senate Properties. The decision on whether to realise the design, which is contingent on the Ministry of Education and Culture and the Finnish Heritage Agency committing to its leasing costs in accordance with the central government leasing system, will be made after the design phase. The construction contracting of the annex will be handled by Senate Properties, which manages the culturally and historically valuable National Museum building.

If construction begins as planned, the new complex consisting of the existing historical museum building, the new annex and the courtyard park will be opened to the public in 2025. The National Museum of Finland will remain open to the public throughout the construction.