The bleak Scottish winter is probably not a time that most people would start thinking of outdoor japes and pranks, but that is exactly what would have happen in the 16thcentury, as visitors to The Real Mary King’s Close in Edinburgh will discover with its series of festive tours launching on 7thDecember. In the 16thcentury the close would have been open to the elements, but for 21stcentury visitors, developments in the mid 18thcentury led to the street being enclosed below the Royal Exchange, creating an almost cosy ‘closed’ Close that provides welcome relief from the frantic festive 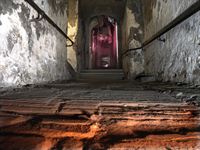 Children from schools around Edinburgh are being invited to write new spooky stories in a competition being run by The Real Mary King’s Close, with an exclusive ‘trick or treat’ prize for the award winning entry – and their whole class! Throughout September and October, children will be encouraged to write spooky stories based on the underground close of Edinburgh’s High Street, either taking inspiration from some of the real characters who lived and worked there, or creating a whole new cast of characters for a Halloween tale. The best entry will win the chance of a free visit to The

Award-winning operator of visitor attractions, The Continuum Group, has appointed a new general manager for its Edinburgh attraction, The Real Mary King’s Close. Craig Miller from Leith has joined to manage the day-to-day operation of the site. Craig joins The Real Mary King’s Close, off Edinburgh’s Royal Mile from a cinematic background, working for Apollo Cinemas and the Vue Group. Having spent the last few years travelling around cinemas around the country, he is enjoying returning to his Edinburgh roots to manage the award-winning heritage attraction, which provides underground tours

Sharing the secrets of Edinburgh’s past is set to become a daily occurrence for one Leith resident, as Craig Miller becomes the principal key-holder for underground Edinburgh, having been appointed General Manager of award-winning visitor attraction, The Real Mary King’s Close. Craig joins the attraction’s operators, The Continuum Group, from a cinematic background, working for Apollo Cinemas and the Vue Group. Having spent the last few years travelling around the country, he is enjoying returning to his Edinburgh roots to manage the heritage attraction, which provides underground tours