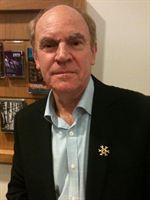 The UK’s longest running poetry festival returns to Stratford-upon-Avon this summer (2 July – 2 August) and includes in it’s exciting line-up Ashley Hutchings, who has recently been awarded an MBE for services to Folk Music. Whilst folk music fans know Ashley as a ‘The Guv’nor’, a champion of folk music and as founder member of Fairport Convention, Steeleye Span and The Albion Band, he is also a poet and writer. He will be performing ‘Words, Words, Words’ on Friday, 24 July. Even better, he will be bringing musical colleague Ruth Angell, and they will be performing the show together for

The UK’s longest running poetry festival returns to Stratford-upon-Avon this summer (2 July – 2 August) with an exciting line-up of readings, performances and workshops, mixing the talents of inspirational and award-winning poets with actors and musicians. Organised by the Shakespeare Birthplace Trust, the 62nd Stratford-upon-Avon Poetry Festival will mark the centenary of the death of Rupert Brooke, celebrate John Keats as a great Shakespearian, and welcome poet in residence Sally Goldsmith. Whether you’re a seasoned poet, interested in creative writing or simply enjoy a spot of

The summer holidays are the perfect time to explore Stratford-upon-Avon, and the Shakespeare Birthplace Trust has lined up a jam-packed calendar of special events and activities for all the family. Here are our top five reasons to visit Shakespeare’s family homes this summer: · See Shakespeare’s plays in a special season of outdoor theatre performances · Enjoy poetry at its finest at the annual Stratford-upon-Avon Poetry Festival · Get crafty in the brand new nature-themed family activity centre · Trot along to Mary Arden’s Farm to make your own hobby horse and enter the

School children and grown-up gamers are invited to get creative and imagine what Shakespeare’s final home may have looked like in a brand new competition using popular online block building game, Minecraft. Caption: Use your imagination to design what Shakespeare's home may have looked like behind these gates (credit: The Shakespeare Birthplace Trust) The Shakespeare Birthplace Trust , the non-profit organisation that cares for the world’s greatest Shakespeare heritage sites in Stratford-upon-Avon, has launched its Shakescraft competition