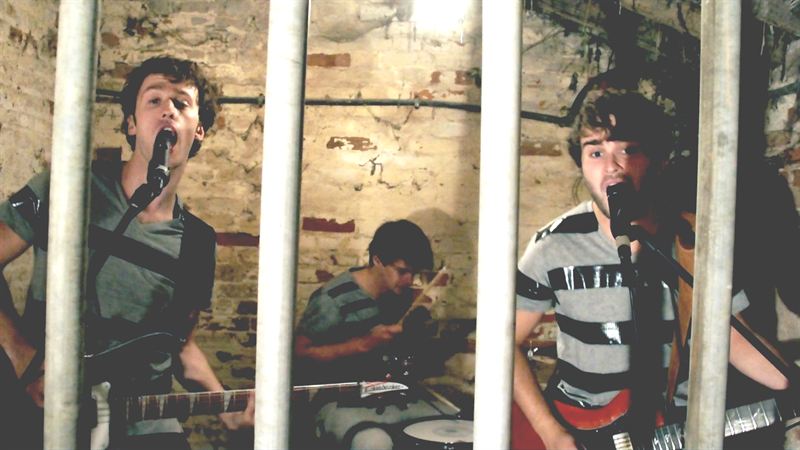 Norfolk rockers The Sharps released their new single and music video ‘Cage of Love’ on Monday.

The track is available for free download on the band’s Facebook and Soundcloud for a limited time.

The ‘Cage of Love’ video, written, directed by and starring the band in multiple roles, makes use of the Norfolk landscapes in its road movie style. It parodies films such as ‘Bonnie & Clyde’ and ‘Thelma & Louise’, focussing on three outlaws who escape from prison and steal a van in their desperate attempt to find freedom. Where in ‘Thelma & Louise’ the finale sees the couple reach the edge of a huge gorge in Utah, these lads wind up at the more modest cliffs at Trimingham Beach.

“The flat, epic landscapes in rural Norfolk make the perfect backdrop for a road movie,” says Callum Morgan, bassist and singer in The Sharps.

The Sharps just finished recording their debut E.P at Headline Music Studios in Cambridge. Entitled ‘Road Movies’, it will be released on December 10th. Along with ‘Cage of Love’, it features three new songs and a re-mastered version of their previous single, ‘My Love Ain’t Gonna Save You’.

The band is currently booking a full UK tour for February and March next year, with help from their recently-signed, London-based publisher, Rainbird Music Ltd.

The Sharps are fronted by twin brothers Callum (bass, vocals) and Kieran Morgan (guitar), with Sam Evans on drums.

They first met at Aylsham High School, Norfolk, where they have played in various different bands together. Since 2011, they have started gigging and recording regularly as three-piece The Sharps.