Norfolk rockers come out of the cold at The WaterfrontNorfolk rockers The Sharps unveil their new, five-piece line up at The Waterfront on Saturday 7th September, as part of the Tilting Sky Festival. Since February the band has gone under cover, working with former record producer George Nicholson on a whole new sound, their brief appearances limited to acoustic slots at local festivals and venues, where they’ve tried out some of their new songs. “It’s been a hugely creative period for us,” says Callum Morgan, who writes most of the songs and, with twin brother Kieran, leads the band. “ 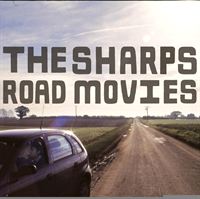 Norfolk’s big skies and epic landscapes are the inspiration behind a Norwich band’s debut EP. Released on 21st January 2013, The Sharps debut EP ‘Road Movies’ includes the band’s two single releases – ‘My Love Ain’t Gonna Save You’ and ‘Cage Of Love’ – along with three previously unreleased tracks. Both singles’ music videos were shot by the band in and around Norfolk. ‘Cage of Love’ follows a road movie storyline, with a final sequence that parodies the ending of ‘Thelma & Louise’. Instead of being

Norfolk rockers The Sharps released their new single and music video ‘Cage of Love’ on Monday. Click here  to see it on Youtube. The track is available for free download on the band’s Facebook  and Soundcloud  for a limited time. The ‘Cage of Love’ video, written, directed by and starring the band in multiple roles, makes use of the Norfolk landscapes in its road movie style. It parodies films such as ‘Bonnie & Clyde’ and ‘Thelma & Louise’, focussing on three outlaws

Norfolk rockers The Sharps release their new single and music video ‘Cage of Love’ this Monday, along with a limited free download of the song.  The band has just finished recording their debut E.P at Headline Music Studios in Cambridge. Entitled ‘Road Movies’, it will be released on December 10th. Along with ‘Cage of Love’, it features three new songs and a re-mastered version of their previous single, ‘My Love Ain’t Gonna Save You’. It’s been a busy few months for the boys. As well as hastily putting out a short music video