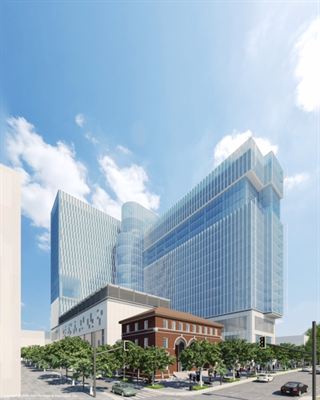 thyssenkrupp Elevator Corporation announced it will install the first TWIN elevator system in the Americas at a ceremony on April 20, 2016. The TWIN elevator system has two cars, arranged on top of each other, that operate independently in one hoistway. The one-of-a-kind technology will be installed in midtown Atlanta at the recently announced Coda, an unprecedented “Class T” collaborative building developed by Portman Holdings for Georgia Institute of Technology.

Five TWIN elevators will be installed in the building in Atlanta’s Tech Square, part of a mixed-use complex containing a high performance computing center, office space and Georgia Tech research neighborhoods. thyssenkrupp’s TWIN system makes the most efficient use of available space, uses less energy and transports up to 40 percent more passengers than conventional elevators. Each TWIN elevator has its own major mechanical and electrical components and shares the same guide rails and landing doors in a single elevator shaft. TWIN features four safety systems which ensure a minimum separation of the cars is maintained. These safety features are monitored by an independent control system in compliance with IEC EN 61 508, which is the highest safety classification of Safety Integrity Level 3 (SIL3), used by the aviation industry.

“This center is changing the landscape of Atlanta. We are honored to call it home to the first installation in the Western Hemisphere of thyssenkrupp’s TWIN and its industry-changing technology,” said Patrick Bass, CEO of thyssenkrupp North America. “thyssenkrupp’s Research Innovation Center has been a proud member of the Tech Square community since 2013. The installation of TWIN now gives us the opportunity to be a part of both its building design infrastructure as well as its innovation ecosystem.”

thyssenkrupp’s installation of its five TWIN elevators, two escalators and seven conventional elevators will begin in 2018 in the 21-story project that will contain about 750,000 square-feet of office, retail and data center space. The project will also feature an intelligent Destination Dispatch elevator control system that groups and swiftly transports passengers the most efficient way possible.

Portman Holdings and John Portman & Associates design will continue building upon a vibrant environment in Tech Square, a landmark project that Georgia Tech launched more than a decade ago. Coda marks the $375 million second phase of Technology Square, a two-acre mixed-use development that includes the adaptive reuse of the historic Crum & Forster building.

“Coda will be unlike anything in the southeastern U.S., and its Class T office space will enable collaboration in a unique and groundbreaking way,” said Ambrish Baisiwala, CEO of Portman Holdings. “The mixed-use building will contain many firsts, and we’re thrilled to start that trend by being the first building in the U.S. to utilize the TWIN elevator technology from thyssenkrupp.”

The TWIN elevator system was introduced in 2003 and has been providing safe reliable service in projects all over the world including the European Central Bank in Frankfurt, Germany; Rain Square in Perth, Australia and the CMA Tower in Riyadh, Saudi Arabia.

thyssenkrupp Elevator brings together the Group’s global activities in passenger transportation systems. With sales of approximately $8.3 billion in fiscal 2014/2015 and customers in 150 countries, thyssenkrupp Elevator built its position as one of the world’s leading elevator companies from scratch in a mere 40 years’ time. The company offers smart and innovative products and services designed to meet customers’ individual requirements. The portfolio includes passenger and freight elevators, escalators and moving walks, passenger boarding bridges, stair and platform lifts as well as tailored service solutions for all products. Over 900 locations around the world provide an extensive sales and service network to guarantee closeness to customers.

thyssenkrupp is a diversified industrial group with traditional strengths in materials and a growing share of capital goods and services businesses. Around 155,000 employees in nearly 80 countries work with passion and technological expertise to develop high-quality products and intelligent industrial processes and services for sustainable progress. Their skills and commitment are the basis of our success. In fiscal year 2014/2015 thyssenkrupp generated sales of approximately $46 billion.

thyssenkrupp is a diversified industrial group with traditional strengths in materials and a growing share of capital goods and services businesses. In North America, thyssenkrupp employs more than 21,000 people across the United States, Canada and Mexico. In fiscal year 2015/2016, thyssenkrupp generated sales of approximately €9 billion ($9.9 billion) in the region, accounting for almost 23% of the Group’s total sales. 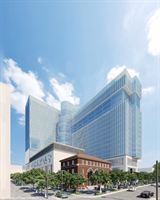