Leah Cox, Ph.D., has been appointed Towson University’s inaugural vice president of inclusion and institutional equity, effective January 23, 2017. Her selection resulted from a national search that yielded more than 50 qualified applicants. The search committee narrowed that pool to four outstanding finalists.        Cox comes to TU from the University of Mary Washington where she served for the past six years as special assistant to the president and chief diversity officer, Title IX coordinator, and campus ombudsman. In this role, she chaired the President’s University Task Force

Scientists find a new way to see inside black holes

Challenges conventional ideas of internal structureTOWSON, Md. — Scientists at Towson University and the Johns Hopkins University are reporting a new way to peer through the event horizons around black holes and visualize what lies beneath. Their results could rewrite conventional ideas about the internal structure of spinning black holes. Current approaches use special coordinate systems in which this structure appears quite simple, but quantities that depend on an observer’s choice of coordinates can give a distorted view of reality, as anyone knows who has compared the size of Greenland

TU graduate also bequeaths manuscripts and screenplays to Albert S. Cook LibraryTOWSON, Md.—Novelist and television writer-producer Robert Ward, class of 1965, has made a $30,000 gift to the university to create the Robert Ward Endowed Scholarship in Creative Writing for graduate students. He has also pledged to bequeath his manuscripts and screenplays to the Albert S. Cook Library. “When I got to Towson I had three teachers who told me I had talent as a writer if I would just work harder: Frank Guess, Donald Craver and Raymond Franke,” Ward says. “They insisted I learn how to shape an

Interim President Timothy Chandler Signs Commitment StatementWe are proud of our students who brought their concerns to the Towson University administration. We applaud them for their conviction and their passion. Last evening’s exchange of ideas was a mutual learning experience that resulted in a shared vision and a feasible course of action. In the words of the students themselves, the opportunity for discourse was as important as their list of requests. We feel confident that we can move forward with the agreement that Interim President Chandler signed last night, and we look forward to 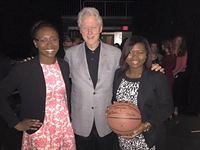 Students out-fundraise stiff competition despite being a team member shortNot even the weekend snow storm could keep Towson University  from coming in first with their "Hope of Guinea" project in the Clinton Global Initiative University Challenge that took place at the University of Florida, March 6-8. Oumou Diallo , a sophomore business administration, finance major and Jacqueline Bell, a sophomore molecular biology major raised $7,690 of a $10,000 goal they set for 2016. The

Towson, MD – James DiMarzio has been awarded the Maryland Law Enforcement Officers Scholarship for 2015. The MLEO Scholarship at Towson University provides financial aid awards to TU students in good academic standing who are Maryland residents and are planning careers in law enforcement. Mr. DiMarzio, a Damascus, Maryland resident, is a senior majoring in Criminal Justice. He is a member of the National Criminal Justice Honor Society and has been honored on the Dean’s List six times. His career plans are to go into local or state law enforcement. The Maryland Law Enforcement

Harford County campus opens doors to degree programs and convenienceTOWSON, Md. ─ Towson University will celebrate the official grand opening of its Harford County campus on Friday, October 10 at 11 a.m. The ceremony establishing Towson University in Northeastern Maryland will be held on the Harford Community College campus at 510 Thomas Run Road, Bel Air, Md. The $28 million facility makes Towson’s programs easier to access for Harford County residents and provides opportunities for study and workforce development in the region. 218 students are enrolled in the fall 2014 cohort. The

Three others to be recognized at October eventTOWSON, Md.(September 18, 2014) —Crystal Neely, Ph.D., a scientist at St. Jude Children’s Research Hospital in Memphis, Tennessee, has been named as Distinguished Young Alumna by the Towson University Alumni Association. Neely graduated in 2006 with a Bachelor of Science in molecular biology, biochemistry, bioinformatics and chemistry. Shortly after her graduation, Neely worked at Morgan State University in the biology department where she managed a research laboratory and collaborated with post-doctoral and graduate students. She was later

Innovation offers the blind more equal access to internetTowson, MD —This month, Towson University received a U.S. patent for its SoundsRight audio CAPTCHA system. A CAPTCHA (Completely Automated Public Turing tests to tell Computers and Humans Apart) is a web-based security feature that limits the number of bots submitting web-based forms or requests for web-based services. CAPTCHAs most often appear as words and/or numbers that web users must type correctly in a response box to access certain areas of a website. CAPTCHAs are ubiquitous and impossible for visually impaired users to operate.

Contenders offer diversityTOWSON, Md.—From DIY auto repair to exquisite-yet-functional home décor items, this year’s TowsonGlobal Business Plan Competition finalists offer something for everyone. The Business Plan Competition is designed to encourage growth and innovation of area startup companies and student ventures by providing them with feedback, networking opportunities, mentorships and, for the grand prize winner, a complimentary incubator membership and cash prize.  Chosen from a pool of nearly 30 entries, the five finalists include: · All Real Concepts—New line of winter