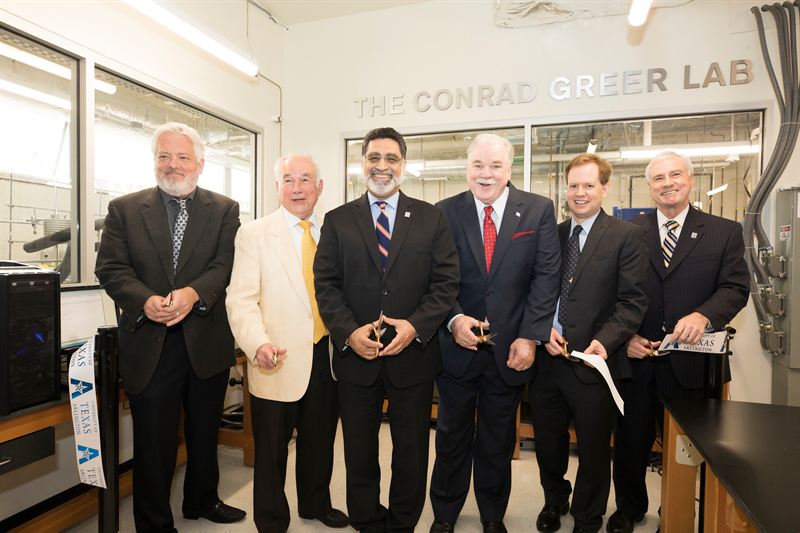 As this region continues its trajectory to become a mega city, UTA’s Conrad Greer Lab was officially showcased this week. Researchers intend to fill a profitable niche in the energy field by converting natural gas to high-grade diesel and jet fuel.

Fort Worth-based Greenway Innovative Energy gave The University of Texas at Arlington $750,000 last year to build the lab. The official ribbon-cutting ceremony this week unveiled years of innovation that will help fuel the world.

Fred MacDonnell, professor and chair in the Department of Chemistry and Biochemistry, and Brian Dennis, professor in the Department of Mechanical and Aerospace Engineering, have perfected a conversion process and created a proprietary technology that allows them to produce liquid fuel on a larger scale, a scale that eventually will move the lab on the road to where natural gas is available.

UTA President Vistasp Karbhari said this partnership signals a critical turning point for the University, Greenway and the world.

“For all of us situated in the metroplex, this is something very important. We are growing at a tremendous pace in this metroplex. We will become a megacity in the next 10 years, and that means there is going to be even more demand on natural resources, and more demand to have cleaner fuels, more efficient fuels and cheaper sources of energy,” Karbhari said. “That’s what this project is all about – trying to take a plentiful natural resource, and convert it in a very efficient and clean way into something you and I will use every day. That is a tremendous impact, not just on this University, not just on the metroplex, but across our nation.”

Raymond Wright, chief executive officer of Greenway, said the research is solid and the industry is ripe for making the technology a reality.

“We needed a proof of concept and UTA delivered that,” Wright said. “Then we needed to know whether it was movable, whether we could scale it down small enough to roll around.”

Greenway’s idea is to access “stranded gas fields.” Stranded fields are gas reserves that would produce too little gas to be economically viable and currently have no technology available to mine them. Many times, those areas remain untapped.

Wright said F. Conrad Greer was the initial catalyst for the idea.

Greer, Greenway’s former chief executive officer, died earlier this year. He was an internationally recognized petroleum engineer and chemist who is known for his extensive work in the evaluation of oil and gas properties, reservoir engineering and the development of enhanced oil recovery methods.

Wright said Greer was passionate about innovation in the development of alternative fuels and came up with the concept for Greenway as he watched natural gas exploration and production soar in the United States over the past two decades.

“This has the potential to be a world changer,” Six said. “We have the potential for Texas to lead the world in the most economic way of producing diesel and jet fuel.”

Karbhari, Wright and Six all praised the UTA team that produced and perfected the technology, too.

MacDonnell said he has many friends at many research institutions across the country.

Greenway officials are anticipating deployment of a field unit that converts natural gas to liquid within the next 24 months.

They said the potential for the technology is especially important for countries that have less oil reserves but have plenty of natural gas. The size of the gas-to-liquid operating system also can be significantly smaller in scale than a refinery.

Greenway recognizes that such technology could be affordable for many developing countries that produce crude oil and flare vast quantities of the natural gas co-produced with the oil. The GTL technology would allow them to directly produce diesel fuel from this ‘waste product.’

A typical plant would consist of two major operations, conversion of natural gas to syngas and a Fischer-Tropsch synthesis operation which converts syngas to equal parts fuel and water.  The water is 98 percent pure, metal-free, and after removal of some alcohols, is potable. This could be critical to countries that lack sufficient access to water.