Veriff is a global online identity verification company that enables organizations to build trust with their customers through intelligent, accurate, and automated online IDV. Veriff’s intelligent decision engine can analyze thousands of technological and behavioral variables in seconds, matching people to more than 9,000 government-issued IDs from over 190 countries. Founded in 2015, Veriff serves a global portfolio of organizations across fintech, crypto, and mobility sectors. Veriff’s total funding to date is $92.8 million, including the latest Series B funding round of $69 million in April 2021. Veriff investors include Y Combinator, Mosaic Ventures, Nordic Ninja, Accel, IVP, and others. With offices in the U.S., UK, and Estonia, Veriff has a team of more than 250 people from 34 different nationalities.

New European tech hub will expand product and engineering teams, global customer reachVeriff , a global identity verification provider, today announced that it will be launching  a tech hub  for its product and engineering teams in Barcelona. This comes on the heels of its New York City office opening in late 2019 and building a stronger presence in London earlier this year as the company expands globally, now with over 300 employees from 35  different nationalities. Well on its way to reaching its goal of 500 employees by Q2 next year, Veriff will tap into the

London, June 15, 2021 -- Monese , a European mobile money app, and Veriff , a global identity verification provider are partnering to provide enhanced and secure digital banking services for consumers across Europe. With this partnership, Veriff is adding an extra layer of safety and security to the mobile money app.Launched in September 2015 as the UK’s first mobile app alternative to traditional banks, Monese provides truly modern portable banking services for mobile money accounts across 31 countries and in 14 languages. Through this

Investment app HeyTrade teams up with Veriff for identity verification 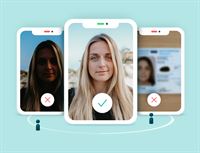 · HeyTrade’s aim is to facilitate investing to all traders by eliminating high fees, limited market access and complex paperwork. · Veriff will be providing face and document recognition technology to speed up the onboarding process for HeyTrade customersHeyTrade, the new full-fledged investing platform, is partnering with Veriff , the global identity verification provider ensuring compliance and security. The app makes the process between sign-up and investing straightforward and simple, and Veriff adds an extra layer of security while accelerating onboarding.

Modularbank, the next-generation core banking platform, today announced a new partnership  with AI-powered identity verification software provider Veriff. Veriff’s industry-leading compliance and KYC offering will be added to Modularbank’s product ecosystem as a ready-to-integrate, ‘plug and play' solution.This is a partnership built on shared values, as these two Estonian companies both foster cultures of continuous innovation in the pursuit of new solutions to address the pain points of their customers. Modularbank, as a cloud-agnostic, API-first platform

Veriff , a global identity verification provider released Face Match , a new AI feature that authenticates or reverifies a person online. Veriff’s facial biometric technology matches the person’s face to an identity document that is already previously verified by Veriff for the client, creating an easy online experience for returning users.The digital identity industry is forecasted to be worth

With Veriff, Joompay users can feel more confident sending and receiving money with anyone, instantly and for freeVeriff , a global identity verification provider is partnering with Joompay , a social finance app enabling money transfers in Europe. The Joompay app allows people to send and receive money from anyone in an easy and fun way. The app makes opening an account in Europe more straightforward and safer than ever, and with this partnership, Veriff adds an extra layer of safety and security.  Veriff verifies the identity of Joompay

With machine learning technology, assisted image capture and near-field communication with a human backstop, Veriff’s identity verification platform is secure, accurate and equalY combinator backed Tanzanian startup NALA Money  (NALA) announced its partnership with a leading global identity verification (IDV) provider Veriff . Veriff will be supporting NALA in offering secure access to financial services via reliable and inclusive identity verification. Building on the success of their personal finance app, which is used by over 250,000

Identity verification securely connects ChekMarc members to ensure a positive, trustworthy community onlineVeriff , a global identity verification provider, is partnering with ChekMarc , a new global social media platform that connects people all over the world, to ensure online users are who they say they are. With this partnership, Veriff adds an extra layer of safety and security to the online platform. Through a simple, hassle-free process that takes less than a minute and needs only a valid government-issued ID or passport, users will have

Veriff expands to Latin American market and partners with Kueski

Veriff, a global identity verification provider is partnering with Kueski, one of the fastest-growing fintech platforms in Latin America. With this partnership, Veriff expands its business in the Latin American market by helping Kueski’s clients to have safe and smooth access to financial services.Kueski is a tech company that promotes digital financial access in Mexico by bringing trustworthy and simple financial services to people underserved by financial institutions. By offering microloans in a completely digital way, Kueski grants first-time formal credit access to people with no

Veriff, a leading global identity verification (IDV) provider, today announced the launch of its improved identity verification-as-a-service platform, expanding access to its intelligent decision engine for small and medium-sized businesses (SMB).The Self Serve platform is available in three tiers, starting at $49 per month, and is the first self-service model to provide access to enterprise-level risk labeling — critical data that provides insight into the signs of fraudulent behavior of individual verifications. With this type of insight and data, including a video of the verification

Amish Mody joins the leading global identity verification (IDV) provider Veriff as their new Chief Financial Officer. Mody has a solid track record in the financial sector, having previously served as VP of Finance at the UK-based fintech Monese and also as an investment banker.“I am really excited to join Veriff, especially because I see a huge growth potential for the whole identity verification industry as the global digitalisation has accelerated over the last year. So far I’ve experienced the ID verification business from a client's perspective, and now I’ll get to see the other side,”

Veriff, an identity verification provider building infrastructure for trust is partnering with the leading European mobility platform Bolt to verify their users. Veriff and Bolt have agreed to cooperate globally with launching their partnership first in Estonia, France, Latvia, Netherlands, Portugal and Ukraine.Bolt is on a mission to make urban travel more affordable, convenient and responsible. As customers’ safety is Bolt’s top priority, it is important to eliminate any attempts of fraud. In very rare cases, when unusual activity is detected, Bolt may require passengers to verify

Veriff’s 2020 Fraud Report Reveals Global Fraud is on the Rise, with the U.S. Leading in Fraud Attempts

Report highlights increased fraud attempts as a result of the COVID-19 pandemic in the fintech, mobility and crypto sectorsVeriff , a leading global identity verification provider, released its 2020 Fraud Report  today which reveals that a rise in digital activity this year is driving an increase in overall fraud rates. In 2020, the U.S. experienced more fraud attempts than anywhere else in the world. The report also highlights the impact of the COVID-19 pandemic on fraud globally,

Identity verification company Veriff launches a new product feature that enables companies to extract category information from a driving licence. During the verification process, Veriff can determine whether the person has a legitimate right to drive a certain category vehicle, in most cases a B-category one.The new feature helps Veriff’s mobility sector clients who provide different ride-sharing services like car- or moped-sharing or rental and need to check whether the person using the service has a valid driving license in the right category. According to Janer Gorohhov, the co-

Identity verification company Veriff launches new technology that can read barcode information from an identity document. Automatic barcode scanner helps to fight fraud and speed up the verification process. The company currently supports barcode scans on US and Canadian documents but plans to expand to other countries and document types using barcodes.According to Janer Gorohhov, the co-founder and COO of Veriff, it is an excellent accomplishment as its focus is increasingly on the US market. "Our usability research revealed that people are not used to scanning barcodes. This is why the

Veriff closed a financing round of 15.5 M USD to ramp up global growth and sales to enterprise customers prior to a larger B-series financing round planned in the future. Money was raised from both new and existing investors.According to Veriff founder and CEO Kaarel Kotkas, despite the global crisis caused by COVID-19, the company has witnessed increased customer engagement and taken advantage of accelerated digitalization around the world. “Last year, our verification volumes grew by 35 times, and we’ve kept up with the growth trajectory this year. However, we are also targeting 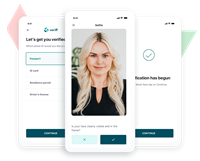