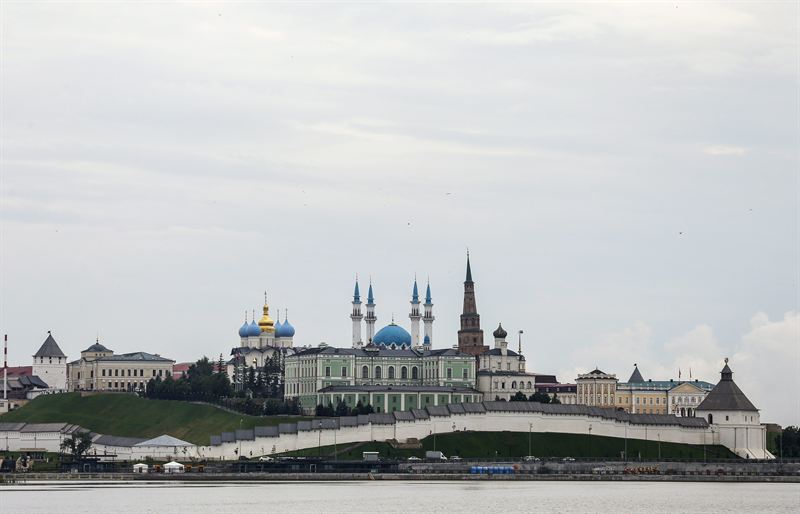 The residents of YIT’s new Sovremennik complex in Kazan have an exceptionally beautiful view from their windows. The apartment buildings that stand along the Kazanka River overlook the Kremlin, a UNESCO world heritage site in the historic centre of Kazan.

“YIT has a lot of responsibility due to the central location of the plot,” says Teemu Helppolainen, Head of Housing Russia segment.

YIT’s project was a success. Kazan was founded more than a thousand years ago, and the town’s historic centre and the new modern Kazan live in harmony on the opposite banks of the Kazanka River.

“Sovremennik gives Kazan a new architectural look, which is bound to be noticed by locals and tourists alike. We do not want this modern building to blend in but to stand out from its surroundings,” says Nailja Jenikeeva, Sales and Marketing Manager at YIT Kazan.

YIT’s primary mission in Kazan is to develop a better living environment. The Sovremennik area was designed as a harmonious complex that offers all the elements of safe and cosy housing, such as a day-care centre, parking facilities and green areas. There are also outdoor get-togethers and other events for residents in Sovremennik.

“The capital of Tatarstan knows YIT not only as a construction company, but also as a creator of pleasant housing,” Jenikeeva says.

YIT has operated in Kazan for more than ten years. The city has developed immensely during that time. The winds of change first swept over Kazan before its thousandth anniversary. The city undertook extensive renovations to prepare for the jubilee.

Roads were repaved. Statues, monuments and buildings in the centre were restored. The 800-metre Millennium Bridge was built over the Kazanka River. The construction of the subway was completed and the metro started operating.

Thanks to the sports festivals, the city has received better public transport services, new sports facilities and a pleasant riverbank area that has become the favourite spot for locals and tourists alike.

“Kazan’s beauty and living comfort rival those of many European capitals. Kazan is constantly planning new events that will promote its urban development even more,” Jenikeeva proudly notes.

Kazan has already been selected as one of the host cities for the 2018 FIFA World Cup.

Nevertheless, the city has not lost all of its old charm.

“Fifteen years ago, the highly developed and clean Kazan was an exception among other major cities in Russia. The city has managed to retain those qualities. The multicultural city is characterised by a strong Islamic presence and the Tartar culture,” Helppolainen describes.

As the city evolves, the preferences of its residents change.

The number of households in Kazan is increasing because the city attracts new residents from the neighbouring towns and from the rest of Tatarstan. The weak economic situation has made small, efficient YIT apartments more popular.

“Ten years ago, who would have imagined that people would want to live in studios with open-plan kitchens?” Jenikeeva asks.

YIT has also affected the construction work culture. According to Jenikeeva, the company is known both for its high-quality end products and for its high occupational health and safety standards.

Vladimir Sorokin, General Director of YIT Kazan, has received a lot of recognition for promoting occupational safety in the region. Last year he won the Manager of the Year award for his contributions to safe and healthy working conditions.

“Our sustainable approach is well-known among the city’s officials. YIT is often invited to speak about its experiences at various green building seminars and events,” Jenikeeva says.

Kazan is the capital of the Republic of Tatarstan and one of the largest cities in Russia. It has a population of nearly 1.2 million, and around half of the population are Tartars and half Russians.

The city celebrated its thousandth anniversary in 2004.

Kazan’s sports teams are among the most successful teams in Russia. FK Rubin won the Russian Premier Football League in 2008 and 2009. Ak Bars Kazan won the KHL championships in 2009 and 2010. Kazan has also won several Russian championships in basketball, volleyball and bandy. Petri Vehanen played goaltender for Ak Bars Kazan in 2009–2012. He was the first Finnish goaltender in the KHL.

Sovremennik is located in the Novo-Savinovski region along the Kazanka River, which is the second most prestigious area after the city centre. The complex has eleven 12–20-storey buildings that house both apartments and offices. The buildings are furnished with energy-efficient lifts by Kone. YIT has also constructed a day-care centre, parking facilities, play fields and a green area in Sovremennik.

Harmonia comprises two 12-storey buildings, each with 110 apartments that range from studios to three-room flats. The Harmonia area also has a day-care centre for 50 children and a parking facility. The site is equipped with energy-efficient technology. Harmonia has good public transport links. Schools and shops are located in the vicinity.

YIT is planning to start the construction of a new site before the end of the year. The site will house six apartment buildings, extensive parking facilities and other infrastructure. The site has no name yet, and it is located on the banks of the Noksa River in Sovetsk. YIT held a design contest for local architectural and construction students, collecting ideas on how to renovate the riverbank.

YIT is a construction industry leader that creates sustainable urban environments by constructing housing, business premises, infrastructure and entire areas. We focus on providing a first-class customer experience, high quality and continuous development of our diverse expertise. Our operating area covers Finland, Russia, the Baltic countries, the Czech Republic, Slovakia and Poland. Our vision is to stay one step ahead – while caring for our customers, partners and personnel. We have over 5,300 employees in eight countries. In 2015, our revenue amounted to nearly EUR 1.7 billion. Our share is listed on Nasdaq OMX Helsinki. www.yitgroup.com