Exciting plans for an international festival and a trade mission to one of the world’s largest arts conferences were revealed yesterday in a special event to mark the first anniversary of York securing its UNESCO City of Media Arts status. In a launch event at the new Hiscox building in York, project leaders, Marcus Romer and Stuart Goulden, revealed ambitious plans for the inaugural ‘Mediale’ in 2017/18, a biennial festival involving 100,000 people over 20 days.  The festival will bring together digital artists, schools and performers to create 25 new commissions including major light

The city of York is today celebrating receiving one of the world’s most sought-after accolades, welcoming the news that UNESCO has designated York a City of Media Arts. “This clearly flies the flag for York’s bid to be the first port of call for media arts in the UK, and indeed, one of the most creative cities in the world.  This designation recognises all of the people involved in York’s vibrant digital arts scene: computer games designers, digital archivists, film producers, light artists, online publishers and many people who play a supporting role,” comments Kersten England, chief 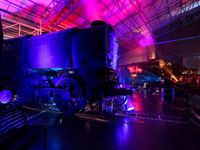