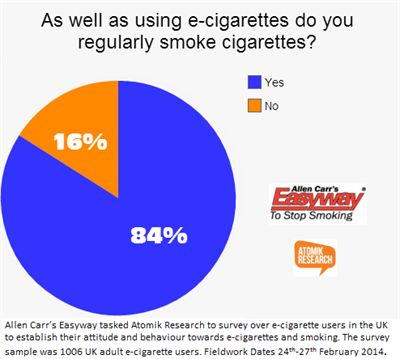 The survey, conducted to coincide with Wednesday’s National No Smoking Day, identifies smoking and e-cigarette user patterns amongst people who have used e-cigarettes in the UK since the New Year.

A key finding of the survey was that a staggering 84% (eighty four per cent) of e-cigarette users regularly continue to smoke cigarettes as well as use e-cigarettes.

This is particularly worrying as nearly half of e-cigarette users surveyed (47%) indicated that they started using e-cigarettes in an attempt to stop smoking entirely.

The 39% of e-cigarette users surveyed who indicated that they started vaping (using e-cigarettes) in order to cut down on the number of traditional cigarettes they smoke seem to be unaware of the risks of continued smoking combined with vaping – let alone of vaping in isolation.

John Dicey, Managing Director and Senior Therapist for Allen Carr’s Easyway comments “A major foundation stone of the harm-reduction plan is that e-cigarettes are far less harmful for a smoker’s health than cigarettes. Considered in that context the argument seems to have at least some merit. But if the results of our survey provide an accurate snapshot of e-cigarette user behaviour then this is extremely bad news for those who have championed e-cigarettes on the basis of harm reduction. Perhaps it never occurred to those people that many e-cigarette users would simply smoke when they are able to, and switch to vaping when not able to? In fact our interpretation of the figures indicate that the users of e-cigarettes might well be imbibing even more nicotine as a result of their dual use of cigarettes and e-cigarettes i.e. using e-cigarettes at times when previously they might have abstained entirely.

Allen Carr’s Easyway To Stop Smoking organisation favour anything that enables a smoker to become free from their addiction and it’s tragic that rather than helping smokers to quit – smokers are being funnelled into behaviour that will ensure they remain addicted, continue to suffer the mental and financial hardship caused by that, and continue to do tremendous harm to their health. The results of our survey indicate that the nicotine time bomb continues to tick.”

Why is continued smoking and vaping such bad news – health wise?

As reported across the media a few weeks ago* research by Professor Robert West of University College London into the attitudes of occasional or social smokers led health campaigners to warn that occasional smokers appear to be in complete denial about the dangers they are facing. Dr Mike Knapton, associate medical director of the British Heart Foundation remarked of that research “Despite common perceptions many part-time and social smokers get through enough cigarettes a week to put their lives on the line…..too many are in denial about the life-threatening damage they could be doing”

John Dicey, Managing Director and Senior Therapist for Allen Carr’s Easyway comments further “Allen Carr’s Easyway organisation exists to rid the world of the scourge of nicotine addiction and we’d support anything that helped achieve that. However, this survey seems to indicate that the policy of harm reduction may be floundering already and, even worse, be leading a whole generation of smokers back into the wilderness whereby they become blind and blissfully unaware of the damage being caused by their addiction. There are only three winners here; Her Majesty’s Revenue & Customs who will continue to tax smokers (and in time vapers) to the hilt and the nicotine industry ie Big Pharma and Big Tobacco both of whom are battling each other to supply e-cigarettes IN ADDITION TO their core traditional nicotine products.

As pioneers in the field of curing smoking, and in fact all forms of nicotine addiction, we’ve already incorporated e-cigarettes into the money back guarantee that we provide at our clinics across the globe. We’ve done so based entirely on the understanding that a vast majority of e-cigarette users remain regular smokers of traditional cigarettes and need, more than ever, an effective means on stopping.”

Other stats from the survey:

9% of e-cigarette users are under 25 years old

Press Office - out of hours email for urgent enquiries kt173hb@me.com

There are Allen Carr's Easyway To Stop Smoking Centres in more than 150 cities in over 50 countries worldwide. 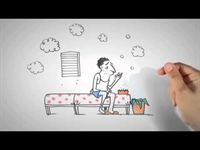 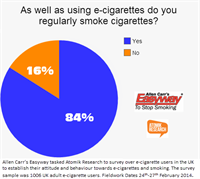