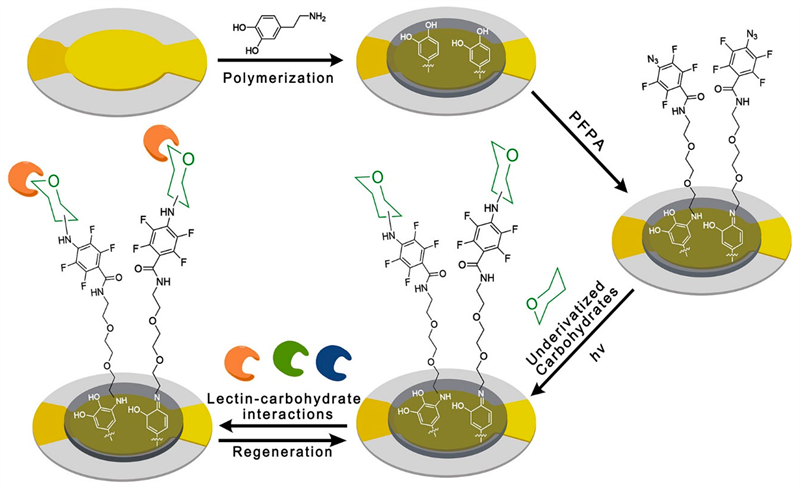 A new paper has been published in Polymers by Prof. Pei and co-workers at the Northwest A&F University. The work is a follow up study of their recent publication where they developed a new carbohydrate functionalized biosensor surface. In this new article, they have developed the technology even further to allow for the use of underivatized carbohydrates without any modification, thus enabling the surface for industrial use. This concept can be used for the detailed understanding of the interaction of biomolecules and human carbohydrates. By combining it with Attana’s cell- and bacteria-based assays, it is a powerful tool for the development of new pharmaceuticals or antibiotics.

In the article, the method is used to prepare functionalization carbohydrate surfaces, which characteristics are then demonstrated by lectin interaction with lectins. The functionalization is based on perfluorophenylazide (PFPA) modified polydopamine (PDA) surfaces. Carbohydrates are immobilized on the surface by ultraviolet light. The resulting carbohydrate-sensor chips were evaluated in the Attana Cell™ 200 system for real-time characterization of lectin–carbohydrate interactions. Several lectins, including wheat germ agglutinin (WGA), soybean agglutinin (SBA), peanut agglutinin (PNA), Ulex europaeus agglutinin I (UEA-I) and concanavalin A (Con A) were evaluated with respect to their interaction characteristics with different carbohydrate chips.

This work strengthens Attana’s position as a world leading provider of characterization of molecular interactions for drug development. In particular, the importance of carbohydrate interactions has been elucidated by several groups using Attana’s QCM-technology. Read more about related publications here: