To show the possibilities and flexibility of Crunchfish's gesture control product – XR Skeleton – the company today publishes a video of a prototype in AR, in which interaction with virtual objects and buttons is shown. As previously announced, the company's gesture control product XR Skeleton has impressive performance and advanced features, which creates the conditions for high-precision interaction with virtual objects in Augmented Reality (AR) as well as Virtual Reality (VR) environments. 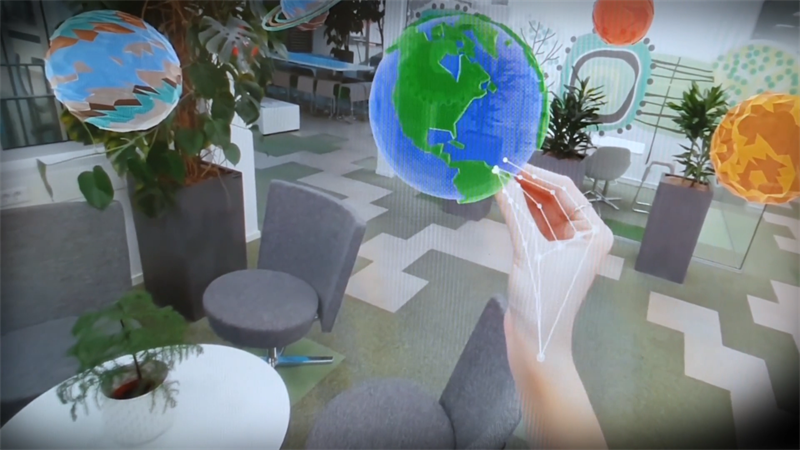 By identifying all the moving parts and contours of the hand and then linking these points together into a skeletal structure, the possibility of high-precision interaction with virtual objects is opened up. In the interaction video which is now available, examples of how you can use the skeleton model to pinch objects, change size and press buttons are shown. An important detail that affects the user experience in a positive way is the flexibility of the gestures. It does not matter if you press the buttons with one finger, two fingers or the whole hand - it works just as well, which shows how intuitive the interaction is. This may seem like an obvious feature, but it is extremely difficult to solve technically without Crunchfish's skeleton model.

An important difference between AR and VR is that in AR, you always see reality and the user's real hands. This entails the complexity that the system must keep track of exactly where the hands are in relation to all augmented information, such as the planets in the video above. From the user’s point of view, the experience must be that the objects as well as the hands seem real, and in that case the user must be able to touch and move the objects as if they were real. Enabling this intuitive gesture control is one of Crunchfish XR Skeleton's absolute strengths.

“We are proud to show our XR Skeleton solution in an AR environment, where the precision and compliance of the interaction is clear. We constantly enhance the solution technically and there is no doubt that we are among the best in the world in the field of gesture control", says Daniel Milesson, Head of R&D at Crunchfish Gesture Interaction AB

About Crunchfish – crunchfish.com/gestures
Crunchfish is a tech company with a patent-pending solution for digital offline payments that can be integrated both with the payment rail or in a mobile wallet. The offline solution is globally scalable and makes digital payments more robust as the risks of disruptions and downtime are eliminated. We have also developed Blippit, an app terminal that connects to a cash register system for both online and offline payments. Crunchfish also develops gesture control of smart AR glasses for the consumer market. Crunchfish has been listed on Nasdaq First North Growth Market since 2016 with headquarters in Malmö, Sweden and with representation in India.