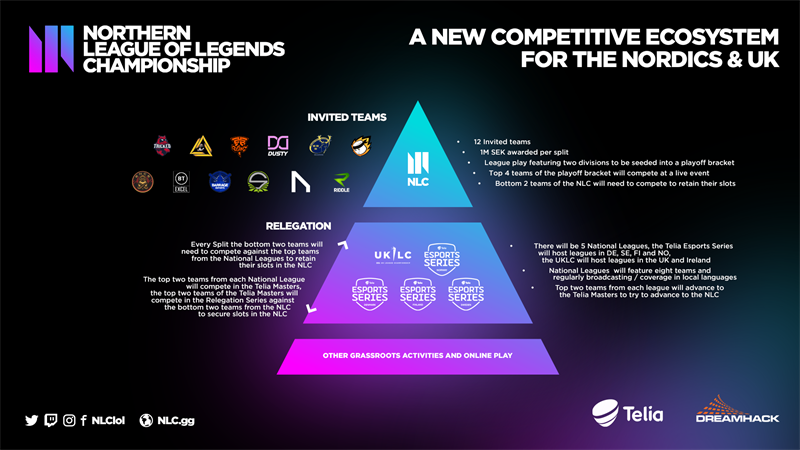 STOCKHOLM — DreamHack and Riot Games have entered an agreement to launch the Northern League of Legends Championship (NLC), a new Northern European league in Riot Games’ highly-popular, competitive, and fast-paced, action-strategy game, to be run by DreamHack. The NLC is supported by a new competitive ecosystem in Telia Esports Series, which is expanding from Finland to Norway, Denmark, and Sweden featuring national leagues and DreamHack-operated UKLC in the UK and Ireland.

“DreamHack has been the leading esports organizer in the Nordics for a very long time and we are very excited to partner up with Riot on a long term basis to create a more stable ecosystem for players, fans, and teams around League of Legends,” said Michael Van Driel, Chief Product Officer at DreamHack, “In partnership with 12 top team organizations from all of the different countries here, the NLC we believe is going to be the best regional esports competition out there.”

The inaugural season of NLC is scheduled to start in June 2020, and will be played online with the season finals planned to be held August 7-8 at DreamHack Summer in Jönköping, Sweden. Twelve of Northern Europe’s best League of Legends esports teams will participate in the NLC, including ENCE, Nordavind, Singularity, Barrage, BT Excel, Fnatic Rising and more! (full team list here), competing for a minimum of 1 million SEK per season being awarded to teams and players.

“We have been working hard with DreamHack and Telia to really create something special for the Nordics’ best League of Legends players. There is now a much clearer path from the amateur leagues through to professional level and we’re excited to see what the talent here can do on the big stage,” said Mo Fadl, Head of Publishing Nordics, Riot Games.

The new competitive ecosystem will allow highly-talented, competitive players from across the region to flourish on home soil and create a pathway for amateur players to join the professional ranks. It will also give League of Legends fans an opportunity to get behind the best players the region has to offer, engaging with local events and broadcasts.

The NLC is the official League of Legends esports organization for the Nordics, UK and Ireland. It is part of the official European Regional League circuit and connects to the European Masters.

Full details about UKLC and the NLC is available on their respective websites, dreamhack.com/uklc and nlc.gg.

ABOUT TELIA COMPANY
Telia Company’s approximately 21,000 talented colleagues serve millions of customers every day in one of the world’s most connected regions. With a strong connectivity base, we’re the hub in the digital ecosystem, empowering people, companies and societies to stay in touch with everything that matters 24/7/365 - on their terms. Read more at www.teliacompany.com.

Telia Finland invests each year about EUR 200 million in connections in Finland and employs directly about 4000 people and indirectly thousands of others. At the end of 2019, about 4.3 million subscribers had chosen us as their operator. Telia Esports Series is an esports league launched in Finland in 2019. Join us at www.telia.fi.

ABOUT LEAGUE OF LEGENDS ESPORTS LEAGUES
League of Legends is a premier global sport with over a dozen professional esports leagues, 113 professional teams, and over 850 salaried athletes worldwide, overseen and operated by Riot Games. League of Legends esports games are broadcast live to millions of fans in 18 different languages across the globe, with viewership of the regular season averaging 90 million hours-watched live, week-over-week worldwide.

ABOUT RIOT GAMES
Riot Games was founded in 2006 to develop, publish, and support the most player-focused games in the world. In 2009, Riot released its debut title, League of Legends, to worldwide acclaim. League has gone on to be the most-played PC game in the world and a key driver of the explosive growth of esports. As League enters its second decade, Riot continues to evolve the game while delivering new experiences to players with Legends of Runeterra, League of Legends: Wild Rift, Teamfight Tactics, and multiple work-in-progress titles, while exploring the world of Runeterra through multimedia projects across music, comic books, and more. Founded by Brandon Beck and Marc Merrill, Riot is headquartered in Los Angeles, California, and has 2,500+ Rioters in 20+ offices worldwide. Riot has been featured on numerous lists including Fortune’s “100 Best Companies to Work For,” “25 Best Companies to Work in Technology,” “100 Best Workplaces for Millennials,” and “50 Best Workplaces for Flexibility.”