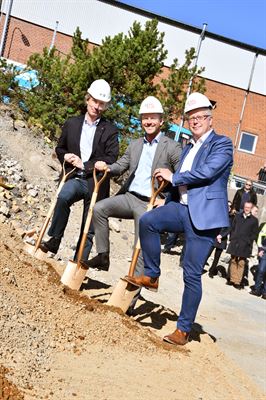 On 23 September, construction will begin of the totally new residential area Fixfabriken in the popular and loved Majorna area of Gothenburg. With 500 new tenant-owner’s apartments, where Balder is responsible for approx. 250, the old deserted industrial area between Vagnhallen Majorna and Älvsborgsbron is being transformed into four lively and vibrant blocks.

The zoning plan for Fixfabriken includes a further 500 apartments, i.e. 1,000 in total and when everything is finished, Majorna is expected to have grown by approx. 2,300 inhabitants. There is strong interest in the new construction work in Fixfabriken. Such a large area in the middle of an attractive city district where many Gothenburgers want to live is eagely awaited. According to Majorna residents themselves, the popularity is due to the distinctive city skyline and warm community feeling.

“I moved to Majorna from California in 1984, and what Majorna lacked in sunshine it certainly made up for in terms of character. The architecture, the people, the diversity. When I bought my first apartment I said that the only way I will ever leave Majorna is if they carry me out in a coffin. I have now bought an apartment in Fixfabriken for my son where there is everything he will ever need and wish for,” says Lisa Ferrazzoli, one of the first people to have bought an apartment in Fixfabriken.

The architect’s office behind the development of the blocks, What! Arkitektur, has shown great respect for Majorna’s distinctive city skyline and has been inspired by the differing character and scale of the surrounding buildings.

“Our ambition has been to create architecture which is rooted in the site and that at the same time adds new qualities to the area. The traditional low block structure, saddle roofs and porticos which lead to the courtyards. Another example is the brick façades which are common both in the ground floors of the County Governor houses and in the buildings at Klippan. In Klippan, there is also the connection to taller buildings which have inspired the idea of the blocks’ tower,” says Peter Hulting, the responsible architect at What! Arkitektur.

The first tenant-owner’s apartments are expected to be ready for occupation in 2021, and the remaining 500 apartments should be ready to the east of Fixfabriken by 2028. The responsible housing companies for Fixfabriken are HSB Göteborg and Fastighets AB Balder. Fixfabriken is a part of the BoStad 2021 initiative, which is a collaborative venture to build 7,000 extra homes until Gothenburg’s 400th anniversary in 2021.

Facts about Majorna
- Majorna is a generic name for the area and consists of the four smaller city districts Stigberget, Majorna, Kungsladugård and Sanna (Sandarna) and extends from Bangatan in the east to Kungstensmotet in the west.
- The population is just over 30,000 people.
- The rental apartment is by far the most common form of housing.

Fastighets AB Balder is a listed real estate company which shall meet the needs of different customer groups for premises and housing through local support. Balder's real estate portfolio had a value of SEK 129.2 billion (109.7) as of 30 June 2019. The Balder share is listed on Nasdaq Stockholm, Large Cap.