Fastighets AB Balder is a listed real estate company which shall meet the needs of different customer groups for premises and housing through local support. The Balder share is listed on Nasdaq OMX Stockholm, Large Cap.

Fastighets AB Balder and Serneke are establishing another joint venture development company to continue the collaboration in Karlastaden, Gothenburg. This time, the joint venture companies will develop the Aries block in Karlastaden involving approximately 190 apartments.The Aries block comprises about 15,000 square metres of gross floor area. There are plans in the property for housing of about 9,500 square metres of living space, 190 tenant-owner’s apartments and commercial premises comprising about 2,000 square metres of commercial floor space. According to the plans, the building will

The vision for Framtidens Backaplan is ambitious and the urban development project is now taking the next big step – in January, the zoning plan for the western part of the area, Zoning plan 2 Backaplan, will go out for consultation. In this part of the area, the property company Balder is planning four residential blocks and an office property. The ambition is that the first apartments will be ready for occupation in 2025.On Tuesday, 14 December, the building committee in Gothenburg decided to take the next step in the urban development project Framtidens Backaplan and allow zoning plan 2

Balder’s outlook changed to stable from negative by S&P

On October 18, 2021, S&P announced that they changed Balder’s outlook from stable to negative due to Balder’s mandatory bid on Entra ASA (”Entra”) and the uncertainty regarding the initial funding structure. As only 2.37% of Entra’s shareholders accepted the offer, S&P has now revised the outlook back to stable. Balder has previously communicated that they will take the steps necessary to maintain a BBB stable rating. It is therefore gratifying to announce after only two months that the negative outlook has been revised back to stable. For further information, please contact:CEO 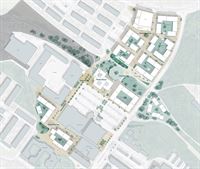 Salem’s centre area is about to undergo a major transformation and will gain new housing, different types of premises, an urban park etc. The property company Balder is one of three actors that have obtained a land allocation and, among other things, is planning three residential blocks with about 350 apartments and a new civic hall in Salem’s new town centre.During 2021, Salem Municipality, assisted by Gehl Architects, produced a structural plan for the centre area. The vision is to create an attractive living environment with new housing, pedestrian and bicycle paths and a new civic hall.

THIS ANNOUNCEMENT IS NOT FOR RELEASE, PUBLICATION OR DISTRIBUTION, DIRECTLY OR INDIRECTLY, IN AUSTRALIA, CANADA OR JAPAN, OR ANY OTHER JURISDICTION IN WHICH SUCH RELEASE, PUBLICATION OR DISTRIBUTION WOULD BE UNLAWFUL.Oslo, Norway – 8 December 2021   Reference is made to the mandatory offer dated 8 November 2021 (the “Mandatory Offer”) to acquire all shares in Entra ASA (the “Company”) that are not already owned by Fastighets AB Balder (“Balder”) at an offer price of NOK 202.50 per share. The acceptance period for the Mandatory Offer expired, 7 December 2021 at 16:30 CET.   Upon

Stureplansgruppen is establishing on Lidingö and is leasing a hotel property from Balder in order to initially operate Co-Living spaces. The investment is part of the entertainment group’s ambition to increase the number of Lifestyle Hotels which will further strengthen Balder’s position as a commercial property owner and manager.In Balder’s premises in Dalénum on Lidingö, Stureplansgruppen through its new Lifestyle Hotel, Boo Boo Living, will create a new and unique arena for living, eating and producing music. Stureplansgruppen’s plans are initially to operate Boo Boo Living for long

A digital model now allows anyone seeking to visit one of the penthouse apartments in Karlatornet to do so, even though the tower is not yet complete. Visitors can walk freely around the apartment using their computer or mobile phone, experiencing the feeling of living at an altitude of 245 meters, in one of the Nordic region’s highest residences.The apartment that you can now tour is one of Karlatornet’s four Penthouse apartments. The home is 370 square meters in size and extends over three floors with a roof terrace highest up on floor 73. No specific hardware is required to visit the

THIS ANNOUNCEMENT IS NOT FOR RELEASE, PUBLICATION OR DISTRIBUTION, DIRECTLY OR INDIRECTLY, IN AUSTRALIA, CANADA OR JAPAN, OR ANY OTHER JURISDICTION IN WHICH SUCH RELEASE, PUBLICATION OR DISTRIBUTION WOULD BE UNLAWFULOslo, Norway – 8 November 2021 Reference is made to the stock exchange announcement by Entra ASA (the “Company”) on 12 October 2021, where it was informed that Fastighets AB Balder (“Balder” or the “Offeror”) had acquired 610,059 shares in the Company, resulting in an aggregate holding of 61,320,119 shares, equalling 33.67 % of the shares and votes in the Company, thereby

Analysts, investors and the media are invited to a conference call in connection with the publication of the interim report on Thursday, 11 November at 08:45 CET. The presentation will be held in English. To attend the conference call please register using the link below. After registration you will receive dial in numbers and pin code. Please register here . The presentation material will be published on balder.se For further information, please contactCEO Erik

Balder is constructing apartments on Kungsholmen

In one of Stockholm’s best locations, on expansive Kungsholmen, the property company Balder is constructing “Fabrique 46” – almost 140 modern and well-planned apartments close to greenery, water and the city. As always, sustainability is important and Balder’s ambition is that Fabrique 46 shall be Nordic Swan ecolabelled, which will then become the first in the company’s portfolio. Stadshagen on Kungsholmen is being developed and densified for a better urban and park life. In the northwestern part of the district, at the Göransgatan/Warfvinges väg intersection, the property

Balder’s annual general meeting on 12 May 2021 resolved that the nomination committee should be composed of one representative for each of the two largest owners or ownership spheres, together with Lars Rasin, who represents the other shareholders. The names of the other two members and the owners they represent, shall be published not later than six months before the annual general meeting 2022 and shall be based on the known ownership immediately prior to publication. In accordance with the resolution, the following nomination committee has been established, based on the ownership as of

On October 18, S&P announced that they confirm Balder's BBB rating but revise the rating outlook to negative from stable. The revision is related to Balder's intention to make a mandatory offer for the remaining shares in Entra ASA ("Entra") and uncertainty regarding the initial financing structure. Balder maintains its previously communicated preference for Entra to remain listed on the Oslo Stock Exchange while at the same time increasing our ownership interest in Entra. Balder has had a BBB stable rating since 2017 and we reconfirm our rating commitment to BBB and we would take the

On October 12, Fastighets AB Balder (“Balder”) acquired 610 059 shares in Entra ASA (“Entra”). Following the acquisition, Balder owns a total of 61 320 119 shares in Entra, corresponding to 33,67% of the number of shares and votes. In light of the above, Balder intends to submit a mandatory offer to the remaining shareholders in Entra within four weeks. The mandatory offer must at least correspond to the maximum that Balder has paid for shares in Entra during the past six months. Balder has paid a maximum of NOK 202.5 per share following adjustment for dividend which were paid in October

The spade in the ground for new housing in Östermalm

Yesterday was the construction start for the CAPREA housing project in Östermalm, where Balder will build 28 apartments, approx. 300 sqm of retail space on the ground floor and parking places in the basement.There are many beautiful residential properties in Östermalm, which were usually constructed more than 100 years ago. Now Balder wants to construct an entirely new tenant-owner apartment building on one of the few remaining sites in the area. The site is located on the corner between Birger Jarlsgatan and Kungstensgatan, overlooking Ellen Keys Park. “We are very happy to be able to

Serneke and Fastighets AB Balder are forming a joint company to continue their collaboration in the Karlastaden district. The company will develop three buildings in the district, comprising a total approximately 45,000 square meters GFA and approximately 450 apartments.“It feels highly gratifying to take the next step towards realizing one of the Nordic region’s most exciting property development projects alongside Serneke. We are continuing our beneficial collaboration with Serneke and look forward to the continued development of Karlastaden with confidence,” says Erik Selin, CEO of

Balder is establishing a Joint company together with VästkustStugan, Mjöbäcks Entreprenad and Innovation Properties with the goal of constructing Stockholm’s tallest residential building.In Sickla, in the borderland between Stockholm and Nacka, two high-rise buildings are planned containing 38 and 30 floors, respectively. The project is going under the name Nacka Port and will become the new entrance to Nacka city.  “We are very happy about the collaboration with Balder which will help to ensure a strong execution going forward,” says Göran Nergården, VästkustStugan. The project’s

Analysts, investors and the media are invited to a conference call in connection with the publication of the interim report on Friday, 16 July at 8.15 CET. The presentation will be held in English. To attend the conference call please register using the link below. After registration you will receive dial in numbers and pin code. Please register here .The presentation material will be published on balder.se . For further information, please

Balder completes the acquisition of ABP

Fastighets AB Balder announced on 5 May 2021 that they signed an agreement to acquire the Norwegian real estate company Asset Buyout Partners (“ABP”), subject to the transaction being approved by the Norwegian competition authority. Balder has now received approval from the competition authority and as a result Balder will take possession of ABP on 1 July 2021. Balder hereby invites shareholders and investors to a seminar regarding the acquisition. A presentation will be given by the management of ABP where they will describe the investments and opportunities we see with the acquisition

A blasting start in Hovås Höjd

Balder has now started the construction of the new residential area Hovås Höjd, which is located along Skalldalsvägen and up towards the Sandsjöbacka Nature Reserve. Here, 148 rental apartments will be built in apartment blocks and terraced houses as well as a common community house.Instead of a traditional turf-cutting ceremony, the start of construction was celebrated through a collective blasting at the site. Apart from Erik Selin, participants in the ceremony included Mats Ahdrian, Chairman of the Building Committee and Erik Olofsson, CEO of Byggnads AB Tornstaden. “It feels very

Kungens kurva gets its queen 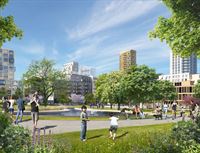 Plans are now at an advanced stage for Victoria, a new district, in Kungens kurva in Stockholm. In Victoria, there are plans for approximately 3,500 apartments, restaurants, cafés, a green neighbourhood park, a school and nursery schools as well as care and other local services.Balder and KF Fastigheter co-own the joint venture company that was created to develop the future district in Kungens kurva. The ambition is that Victoria shall become a suburb of the capital city. The conditions for this are favourable with northern Europe’s largest marketplace in the area, the new lively district 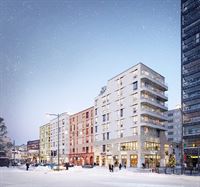 The Building and Permit Committee has taken a decision to grant Balder a building permit for a new residential block in central Sundbyberg. The area will be densified with both housing and business premises. The location, the Basaren 1 block, is known to many Stockholmers for the legendary nightclub Grand Garbo, which was once situated there. “The new development will bring together Landsvägen's streetscape, which will gain the character of a city street. The new advanced buildings with their generous retail premises and display windows will provide the basis for a richer city life with