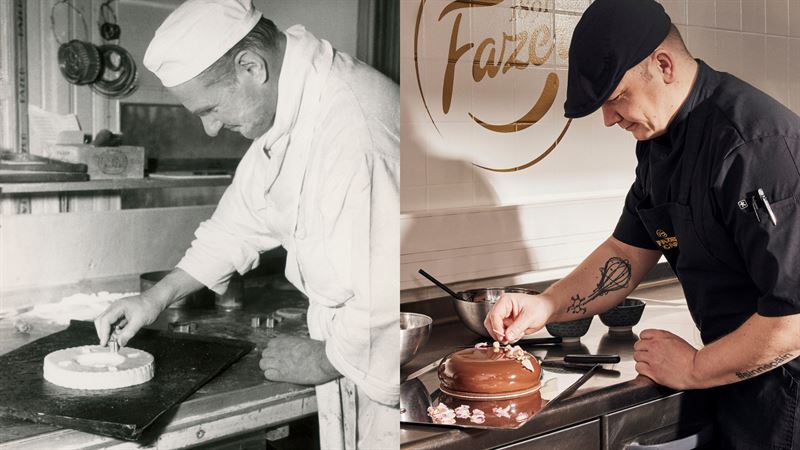 The Fazer story began in 1891, when the young entrepreneur Karl Fazer realised his dream and opened his first café on Kluuvikatu in Helsinki. Today, 130 years later, Fazer is The Food Experience Company, a modern sustainable food company, which employs more than 3,600 people in Finland alone. Alongside its Finnish operations, Fazer also operates in Sweden, Russia, Denmark, Norway, Estonia, Latvia and Lithuania. Beyond this, the company exports to more than 40 countries around the world.

Fazer is one of the most valued brands in Finland. Fazer’s mission, Food with a purpose, reflects both the company’s focus on fast-moving consumer goods and Fazer’s commitment to its task.

“Fazer, celebrating its 130th anniversary this year, is financially strong and has a clear strategy for the future. Sustainability is an integral part of our operations, and by developing food as a solution we are continuing our work to improve the well-being of people, the society and the environment,” explains Christoph Vitzthum, President & CEO, Fazer Group. “In 2021, we have for example committed to the Science Based Targets initiative (SBTi). We will define new science-based climate targets to reduce the emissions in both our own operations and throughout our value chain. Fazer’s Grain Vision is on the other hand at the core of our work to support sustainable farming. Our aim is that all grain used in our consumer products is grown in compliance with the principles of sustainable farming by 2025,” Christoph Vitzthum continues.

Fazer’s operations span almost the entirety of Finland. Fazer’s large bakeries are located in Vantaa, Lahti and Lappeenranta. Vantaa is also home to Fazer’s chocolate and biscuit factory, whereas a thin crisp factory and the mill are located in Lahti and the sugar confectionery production in Lappeenranta. The company’s factory in Koria, in Kymenlaakso, produces plant-based drinks, snacks and cooking products. Furthermore, artisan bread is baked at 114 Fazer shop-in-shop bakeries, located in larger grocery stores around the country. 15 Gateau artisan bakery shops are dotted around the Helsinki metropolitan area and Karl Fazer’s heritage is proudly reflected in the 17 Fazer Cafés currently serving consumers.

Fazer invests significantly in its oats business in Finland

Over the last three years, Fazer has invested a total of approximately EUR 205 million, of which EUR 155 million in Finland. The majority of the investments have been made in developing the oats business of the company.

Fazer’s goal is to become one of the leading producers of plant-based food in northern Europe. Oats, which are growing in popularity globally, play a central role in reaching the objective. In Finland, Fazer uses only Finnish oats and uses all parts of the oats in its production.

The world’s first factory to produce xylitol from oat hulls is being built in Lahti. The xylitol factory represents circular economy at its best, as the raw ingredient of the unique factory, oat hulls, are derived from the oat mill located just next door. The company's expansion investment in the oat mill, a project due for completion at the end of the year, will double the mill’s oat milling capacity. In November, Fazer Mills is turning 50.

In Vantaa, work has been initiated to construct two new production lines of oat products. The bakery’s state-of-the-art portion bread line and the renewal of a production line in the chocolate factory to allow the production of oat-based products are set for completion in 2022. Investments have also begun in Koria to double the factory’s oat drink capacity.

Fazer invites all Finns to celebrate their own Fazer moment

Fazer’s anniversary will be visible across the board and offer the consumers new taste sensations.  The webstore Fazer Store, the Fazer Cafés and the shop in Fazer Experience Visitor Centre holds for sale a 130th Anniversary Box, containing a range of classic Fazer products and the most popular novelties.

The 130 pastry, an anniversary special created by Master Confectioner Eero Paulamäki, is on sale at Fazer Cafés.

Fazer welcomes guests to the Fazer Experience Visitor Centre located in Vaarala, Vantaa.  The exhibition, which is shedding light both on Fazer’s history, closely intertwined with the history of Finland, as well exploring the future of food, will be renewed in autumn 2021. The visitor centre also offers premises for a range of meetings and events, as well as a Fazer shop and a Fazer Café.

In September, in honour of its anniversary, Fazer is conducting a collectables campaign, with each Fazer product purchased in September 2021 accruing points. The points give the consumer a chance to win prizes such as gift cards for the webstore Fazer Store and Fazer 130th Anniversary Boxes. The campaign is also supported with a prize draw, in which the prizes are special-edition Finnish Fazer 130th Anniversary mugs.

September will also see the opening of a webstore selling fantastic textiles in the colours of Fazer’s beloved brands.

It has always been important to Fazer to support the society around it. Fazer has cooperated with SOS Children’s Villages for more than 40 years, and in honour of the anniversary year, a range of activities are being arranged, such as a series of cooking classes for young people soon to be living independently. Another anniversary project supports the Baltic Sea: Fazer is the food programme partner of the Two Rowing Finns team. At the end of the year, the Finnish duo will be rowing across the Atlantic, with a supply of Fazer snacks and a goal of raising EUR 100,000 to support work for the Baltic Sea.

Fazer, The Food Experience Company, enables people to enjoy the best moments of their day. In 1891, the young Karl Fazer opened his first café with a mission to make food with a purpose – and a passion to create moments of joy for all the people around him. Shaping the next tastes, traditions and food experiences, Fazer’s vision is Towards Perfect Days. Fazer wants people to experience the Northern Magic it creates and builds on its strong heritage, consumer first approach and innovations to create the sustainable food solutions of the future. The Group focuses on fast-moving consumer goods, operates in eight countries and exports to around 40 countries. In 2020, Fazer Group had net sales of 1.1 billion euros and almost 8,500 employees. Fazer’s operations comply with ethical principles that are based on the Group’s values and the UN Global Compact.