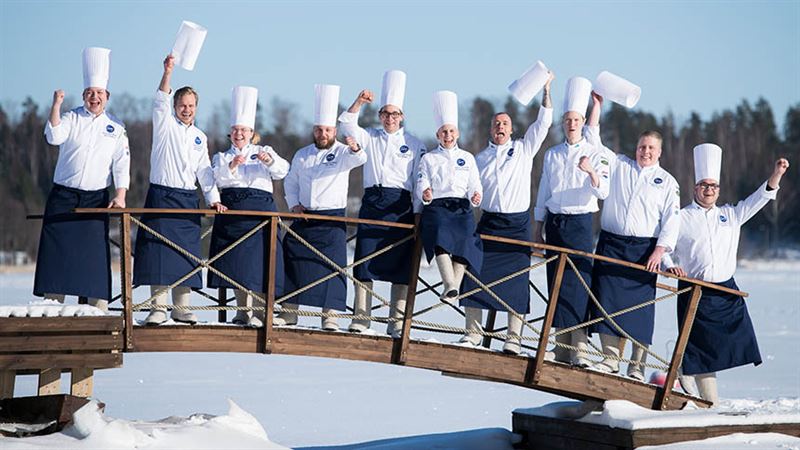 Fazer Culinary Team Finland, which won gold at the Culinary Olympics, will be competing in the Culinary World Cup, held in Luxembourg, on Monday 26 November. The team faces the challenging task of preparing lunch for 150 people in the competition’s Catering category. A record number of teams participated in the tight qualifying round, after which 15 teams were accepted into the actual competition.

The team has prepared for the competition for two years and practised together for the past 18 months. Their cooperation in the kitchen is seamless. Success demands nothing short of a first-rate performance, and each chef has their own role to play in the team. On the day of the competition, the team will get up at 2:30 a.m. Everything must be set and ready for the competition by 7 a.m., when the cooking starts. Lunch will be served at 12 noon.

Following its superb success in the Culinary Olympics, Fazer Culinary Team Finland has continued its work with a new line-up, still led by Senior Manager (R&D) Karri Käki from Fazer Food Services. Those who have continued in the team include the team captain Mika Pesonen as well as Reko Riikonen, Lilli Jyräs, Juha Aalto and Matti Tikka. New members to join the team are Lemmikki Ruuskanen and Antti Tynkkynen.

The theme of the competition menu is 'Fighting Food Waste'. The task in the competition is to prepare a hearty lunch for 150 people in five hours. The lunch will consist of a salad bar, a soup, three main courses, four side dishes and a dessert. Due to the theme, the menu has been built with great care so that the team can use all the ingredients in the best possible way.

“Our category has five judges altogether, all of them professionals who’ve had success in international competitions in the past. They’ll evaluate the overall performance and result: the flavour and presentation of the food, the preparation process, the cooperation and roles in the kitchen, nutrition and, naturally, the consideration of the competition’s theme ‘Fighting Food Waste’ in the menu and the activities,” says Karri Käki, Team Leader of Fazer Culinary Team Finland.

Packing all the items and ingredients needed for the competition is a big job. Nearly all of the ingredients, barring spices and some exceptions, are of domestic origin. Another reason why the team is carrying everything with it is that their menu is set and that they have practised with exactly the same ingredients.

Finnish zander and corn-fed chicken are featured as the main ingredients of the hot main courses. “The menu also highlights seasonal root vegetables, cabbage as well as wild mushrooms and berries at their best,” says Käki.

The Culinary World Cup is a World Championship held every four years with teams from Asia, the United States and a number of European countries. The competition’s Catering category will include a record number of competing teams. After a tight qualifying round, 15 teams were accepted into the actual competition.

Fazer Culinary Team will be competing on Monday 26 November. The team’s level (gold, silver or bronze) will be revealed on Monday evening, and the final scores and result will be announced in the afternoon of the competition’s closing day, Thursday 29 November.

You can follow the team’s journey on social media with #fazerculinaryteamfinland, #roadtoculinaryworldcup2018, #kohtiluxembourgia. The team has its own pages on both Facebook and Instagram. The support team also includes @fazersuomi.

Get to know the team members, watch a video or pick delicious recipes:
www.fazerfoodservices.com/fi/fazer-culinary-team

Fazer is an International family-owned company offering quality bakery, confectionery, biscuit and grain products, plant-based meals, non-dairy products, on-the-go food & drinks as well as food and café services. Fazer’s mission is Food with a Purpose. The Group operates in eight countries and exports to around 40 countries. Fazer’s success, ever since its establishment in 1891, has been based on the best product and service quality, beloved brands, the passion of its skilful people and the Group’s responsible ways of working. In 2017, Fazer Group had net sales of 1.6 billion euros and nearly 15,000 employees. Fazer’s operations comply with ethical principles that are based on the Group’s values and the UN Global Compact.