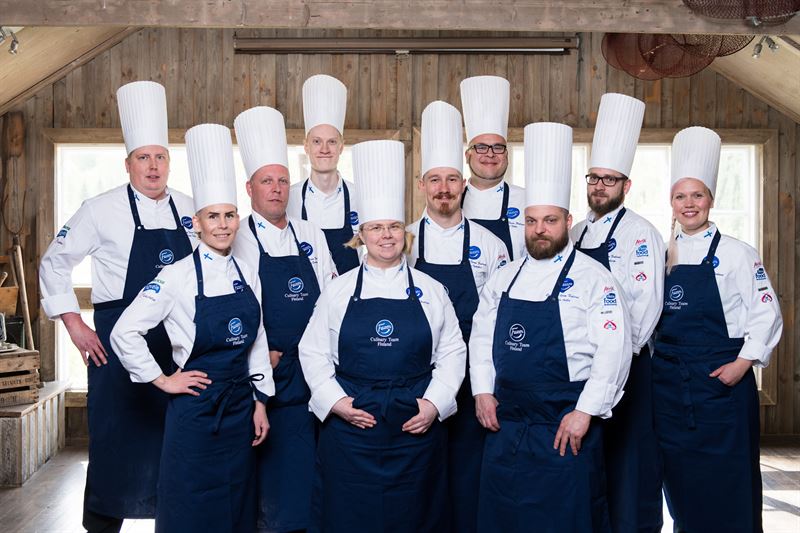 Fazer’s team of chefs, which won gold in the 2016 Culinary Olympics and silver in the 2018 Culinary World Cup, goes after major-league success again when the best chefs in the world face off against each other in Stuttgart in February 2020. The challenge is to prepare lunch for 120 people based on a “Roots” theme.

The ten-person strong Fazer Culinary Team Finland began preparing for Stuttgart with a new line-up in March. Training this season is going to be very intense, given that the future Olympic success will be pursued as early as in February 2020. The teams from different countries will compete against each other over a total of four days, and the Finnish team will be up on 16 February 2020. The results will be announced on 19 February 2020.

In their day jobs, the top chefs in Fazer Culinary Team work at the personnel restaurants of Fazer Food Services, the Fazer Experience Visitor Centre’s Fazer Café, and Fazer 8th Floor. The team, set up in 2015, enjoyed beginner’s success the very first time it took part in the Culinary Olympics, then held in Erfurt, and has since followed it up with a trail of impressive successes. While the team’s composition has renewed, it also contains familiar faces.

Fazer Culinary Team Finland is made up of the familiar Fazer top chefs Lilli Jyräs, Lemmikki Ruuskanen, Juha Aalto, Matti Tikka, Antti Tynkkynen as well as the more recent additions to it, top professionals Piia Raunio, Marko Isokallio, Joona Valokorpi and Christian Sveholm. The team leader is Tapio Bergström, who is also a veteran of the two previous competition seasons.

“Much of our team was renewed this season, and it’s really great to have this many new first-rate professionals in the team. We spent early spring coming up with ideas that fit the theme as well as getting to know each other and the competition’s new rules. We’ll start the technique training this autumn, and will be honing our dishes to “competition shape”. And ourselves, too!” says Tapio Bergström.

A theme of “Roots”

The food theme in the 2020 Culinary Olympics is “Roots”. The lunch is planned for 120 people and it includes, in addition to starters and salad portions, a vegetarian, fish and meat option, as well as dessert. The competition’s rules have changed slightly with the addition of starters and as the side salads changed into salad portions.

“We approached the theme by thinking about everything “Roots” really means to us. To us it represents authentic food, authentic raw materials and real doing. These are then combined and seasoned with a sprinkle of the northern forest. You’ll see the outcome on 16 February 2020!” says Tapio Bergström.

A total of 22 teams from more than 15 countries will be competing in the Community Catering category in Stuttgart. Fazer Culinary Team is supported by Meira Nova, Atria, Valio, Hartwall, E. Ahlström and Arvo Kokkonen.