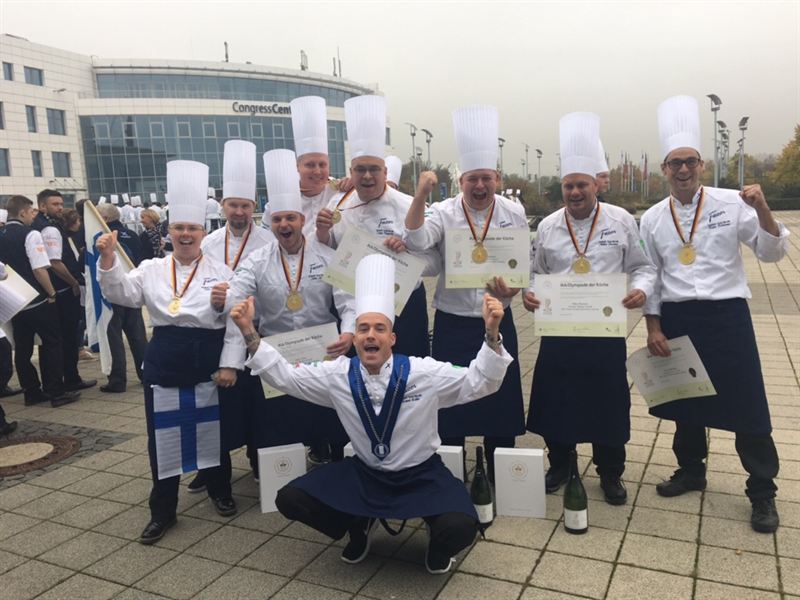 Having trained for a year and a half, the team's ultimate challenge was serving lunch to 150 people with ingredients and dishes that reflected the team's national cuisine.

The Fazer Culinary Team introduced Finnish roots to the menu with a creamy parsnip stew served with freshly cured venison, as well as a dessert with sea buckthorn, apple and oats. The lunch comprised a soup, two main dishes, one vegetable dish, side dishes, a salad buffet and a dessert. Five hours were allowed for preparing the lunch, and each portion could cost no more than five euros.

Praised by the jury

"The jury regarded our professional conduct, cleanliness and good preparations for first-timers as our most positive aspects. The pressure of the competition did show, but our performance was steady and confident. We had to finish in a bit of a hurry, but we kept a lid on things," says Mika Pesonen, team captain.

"Our team spirit has been very good, and everyone has been working together, even when the trip has been taxing on our sleep schedules. The atmosphere at the Olympics has been wonderful, and seeing so many different nationalities share the same space and passion has been exquisite," adds Pesonen.

The members of the Fazer Culinary Team are the top chefs of Fazer Food Services and they work in Fazer’s contract restaurants in Finland’s companies and organisations. The team has been training for this competition for the last one and a half years. There are eight chefs in the Fazer Culinary Team, but in the official team in the competition there are four: Team captain Mika Pesonen, Juha Aalto, Reko Riikonen and Sami Toropainen. Also in the team are Lilli Jyräs, Teemu Hokkanen, Tapio Bergström and Matti Tikka. The team is managed by Karri Käki.

"When we decided to participate in the next Culinary Olympics four years ago, we agreed to do it properly. We collaborated with the national Finnish chef team and went to see, for example, the Culinary World Cup in Luxembourg. We also had the opportunity of sparring with experienced competitor chefs from abroad," says Marianne Nordblom, director of gastronomy and product development at Fazer Food Services.

"Fazer Food Services took the competition seriously, and it bore fruit. The participation of Fazer Culinary Team and our success in the competition are historic and significant for the whole industry – catering is constantly evolving, and we wish to be pioneers who offer front row seats for the talent of tomorrow."

Watch a video of the team and the competition:

Fazer is an international family-owned company offering quality bakery, confectionery, biscuit and grain products as well as food and café services. Fazer operates in eight countries and exports to around 40 countries. Fazer's mission is to create taste sensations. Fazer’s success, ever since its establishment in 1891, has been based on the best product and service quality, beloved brands, the passion of its skilful people and the Group’s responsible ways of working. This year marks Fazer’s 125th anniversary and 150 years from the birth of Karl Fazer, the founder of this successful Group. In 2015, Fazer Group had net sales of more than 1.5 billion euros and nearly 15,000 employees. Fazer’s operations comply with ethical principles that are based on the Group’s values and the UN Global Compact.

Fazer Group Fazer, The Food Experience Company, enables people to enjoy the best moments of their day. In 1891, the young Karl Fazer opened his first café with a mission to make food with a purpose – and a passion to create moments of joy for all the people around him. Shaping the next tastes, traditions and food experiences, Fazer is going Towards Perfect Days. Fazer wants people to experience the Northern Magic it creates and builds on its strong heritage, consumer first approach and innovations to create the sustainable food solutions of the future. The Group focuses on fast-moving consumer goods, operates in eight countries and exports to around 40 countries. In 2019, Fazer Group had net sales of 1.1 billion euros and almost 9,000 employees. Fazer’s operations comply with ethical principles that are based on the Group’s values and the UN Global Compact. Northern Magic. Made Real. 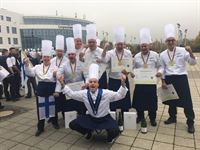