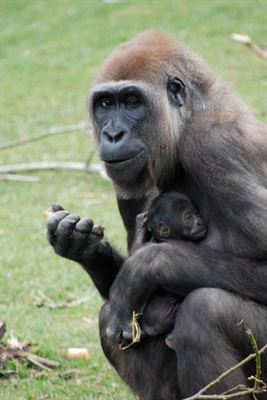 Njema, who is 19, gave birth to a healthy baby in the early hours of November 8th following a natural and uncomplicated labour.

The baby, whose sex is yet to be determined, has been an instant hit with two year old Meisie the gorilla, who is intrigued at the prospect of having a new playmate!

First time mother Njema underwent revolutionary fertility testing earlier this year after keepers became concerned that she had not conceived.

The pioneering testing programme involved mixing child friendly glitter with Njema’s favourite yogurts so staff could differentiate her faeces from that of the other gorillas in order to send it to specialist labs for testing.

Their worry turned to delight in February when the results showed that not only was she cycling normally but she was indeed pregnant!

Since the baby was born two year old Meisie, who was the first gorilla ever to be born at Blackpool Zoo, has been fascinated and is clearly overjoyed to have someone that she will be able to play with.

Peter Dillingham, Animal Manager at Blackpool Zoo, said: “We are absolutely delighted to announce the birth of our second baby Western Lowland Gorilla.

“After the birth our very first baby in 2010 we were very hopeful that our resident silverback Bukavu would successfully mate with Njema, but over a year and a half later she still was not pregnant.

“After consulting with the European Endangered Species Programme we decided to commence investigations and we were thrilled to find out that Njema was pregnant in February this year.

“We closed the Ape House to the public after the birth to give Njema time to adjust to being a mother.

“We have now started to gradually open the house for public viewing but if at any stage Njema looks nervous or stressed, we will need to prevent access for a short time.

“The baby will spend the next few weeks clinging to Njema’s chest until it builds strength and co-ordination.

“We are all certainly looking forward to finding out if the baby is a boy or a girl and by the time spring comes around it will be wonderful to see our two special babies playing together!”

Blackpool Zoo is home to five Western Lowland Gorillas. Bukavu the silverback is 15 and Miliki, aged 17 is the mother of Meisie, who will turn three in May. Njema is Miliki’s half-sister and is a year older at 19. Kena, the remaining female is 31 years old and the daughter of Snowflake, the world’s first and only ever albino Western Lowland Gorilla.

Blackpool Zoo celebrated its 40th anniversary on Friday 6thJuly 2012. It was in 1972 when 3543 visitors attended the launch, which saw TV’s Johnny Morris ride in front of the Mayor’s car on Tower Circus elephant Katsula.

Blackpool Zoo is owned by Parques Reunidos, the second largest European leisure parks operator and a leading world-wide player. The zoo is home to over 1,500 mammals, birds, reptiles and invertebrates set amidst thirty-two acres of mature woodland and lakes.