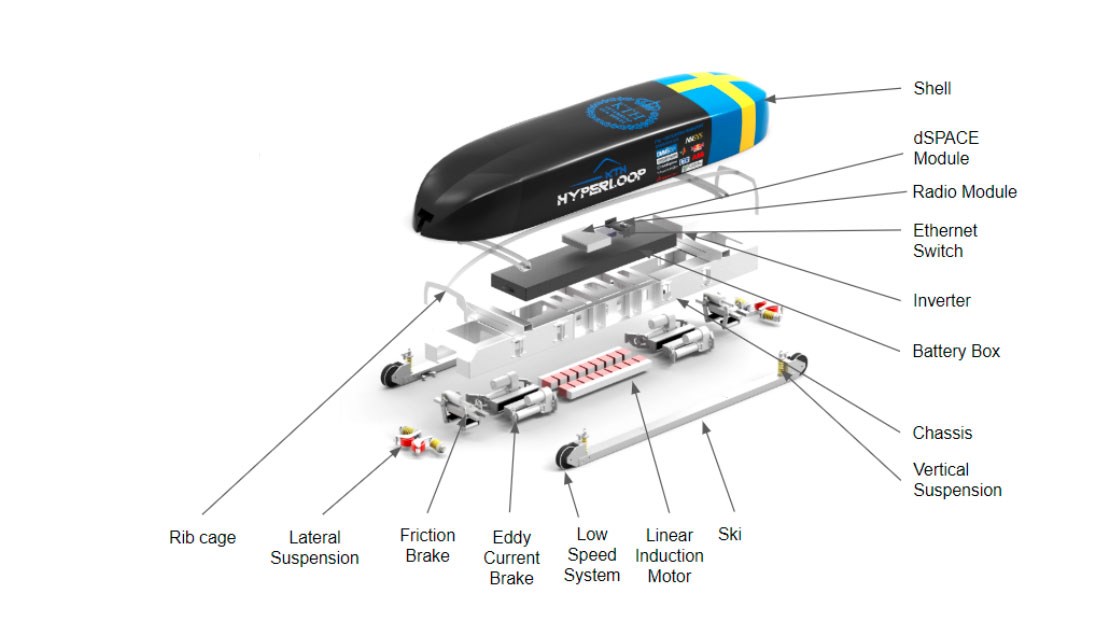 Once again, springs from Lesjöfors play a critical role in a progressive student project. The Hyperloop concept will bring super-fast, fossil-free transportation of both people and goods. A group of technical students in Sweden is competing in global events to develop the groundbreaking technology.

The Hyperloop concept is an initiative from Elon Musk, the founder of Tesla and SpaceX that gathers scientists, students, designers, programmers, venture capitalists and other businesses in cross-border development projects. The high-speed solution that Hyperloop is planned to be will be both faster, safer, cheaper, more comfortable and energy efficient than today’s transportation systems. The vessels will have top speeds of 1 000-1 200 km/h and will bring transports from e.g. Stockholm to Gothenburg in 30 minutes.

High speed thanks to levitation

The concept is basically a pod placed in a tunnel or tube that moves with levitation driven by magnetism. The levitation eliminates friction from the surface and since the tube is a closed environment, there is no impact from the outside. The air pressure is reduced to almost vacuum inside the tube and the reduced air resistance means that the speed can be increased significantly with reduced energy consumption.

“To be able to reach speeds of more than 1,000 km/h, a technology based on levitation is required. Some teams have instead used wheels, achieving a high place in competitions, but at 500km/h and upwards, the friction from the wheels will quickly become too high for the pod to continue to increase in speed. Instead, if magnetic-based levitation is used, the resistance is reduced for higher speeds.”, says Claes Henriksson, team captain for KTH Hyperloop.

The springs, with which Lesjöfors sponsor the team, will be used for the lateral control of the pod. Since a Hyperloop pod travels mainly without friction, it is extremely important that the pod does not come into excessive contact with the monorail (I-beam). The springs ensure that the pod always keeps the right course and does not rub against the rails. In addition to the fact that well-defined springs ensure that the pod maintains its speed, they are also important for safety reasons; should the pod crash into the monorail at high speed, there is a risk for serious damage.

“We are happy to be part of such an exciting and important futuristic project. Sponsoring students for us is both about making important contacts for the future and spreading knowledge about our unique spring expertise ", says Mattias Hartvigsson, product specialist at Lesjöfors.

In operation next decade

There is still a long way to go before the Hyperloop vision can be realized. However, development is progressing quickly and experts believe that the Hyperloop technology can begin to roll out around 2030. Some countries have even higher ambitions and, among others, Saudi Arabia and United Arab Emirates have the goal of having a Hyperloop operating already in 2024.

"Our team’s ambition does not end with the competitions, we want to continue to optimize the systems and assist with expertise for a full-scale Hyperloop network we hope to see in Sweden in the future," says Claes Henriksson.

The Lesjöfors Group provides the widest range of springs and pressings to customers in diverse industries across the world. With a unique expertise in high technological, custom-made solutions and a flexible manufacturing capacity, Lesjöfors is the premier partner for all spring requirements. Lesjöfors, owned by Beijer Alma a listed company on the Stockholm Stock Exchange, comprises almost 40 manufacturing and sales companies in many countries. As a long-term and committed spring innovator, the Group continuously grows with a good profitability, both organically and by acquisitions.