Load Impact is the most popular online load testing service on the Internet. It’s a true On Demand service, where you can start testing instantly and there are no licenses fees. You simply pay as you go. We provide load testing and reporting as an online service to e-commerce & B2B sites all over the world. These are powerful server clusters with very fast connections that are able to simulate tens of thousands of users accessing your website concurrently.

SAN FRANCISCO – Load Impact today offered to provide the technology taskforce responsible for fixing the troubled HealthCare.gov website free use of Load Impact’s performance testing services until the Obamacare website is functioning at full capacity. In testimony before the House Energy and Commerce Committee on Thursday, officials of companies hired to create the HealthCare.gov website cited a lack of testing on the full system and last-minute changes by the federal agency overseeing the online enrollment system as the primary cause of problems plaguing the government exchange for

O’REILLY VELOCITY CONFERENCE, SANTA CLARA, CA – E-commerce sites are some of the worst performing as a category even though availability and performance directly impact their bottom line, according the annual State of Web Readiness report released today by Load Impact, the  cloud-based, on-demand load testing tool.The surprising finding that e-commerce sites perform well below expectations and often with profound performance issues, are the result of data collected from over 5,000 performance tests and surveys of more than 500 Load Impact users in 190 countries. “E-commerce sites spend

SAN FRANCISCO – Load Impact, the cloud-based, on-demand load testing tool, today announced the opening of its office in San Francisco and the appointment of software as a service (SaaS) industry veteran, Charles Stewart as general manager of U.S. operations.“Load Impact’s potential for growth is truly enormous,” said Stewart, who began his career in 1996 as director of Net Ops for Flycast Communications, a pioneering online application platform provider that was acquired by CMGI in 1999 for $1.4 billion.  “Basically, if your online presence is business-critical, then determining how well

For the first time since the launch of the iPhone 3gs, Apple managed to handle the load generated by interested customers accessing its website in connection with a major launch. The real time measurements performed by Load Impact, of the corporate website  www.apple.com, measured short load times, just as fast as on an average day.The average response time for  www . apple . com  is between 30 and 100 milliseconds on a normal day, 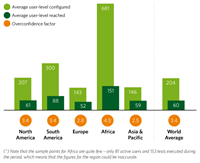 The O'Reilly Velocity Conference, Santa Clara, California - The average website is based on an overestimation regarding its capability to handle visitors by 3.4 times. This is shown in the report The State of Web Readiness 2012, drawing on data about load testing habits in 132 different countries compiled by Load Impact, the worlds largest online, cloud-based load testing service. The report also shows that e-commerce sites tend to be more concerned with being able to handle traffic peaks than other websites.Download the report from: http://loadimpact.com/readiness The report analyzes 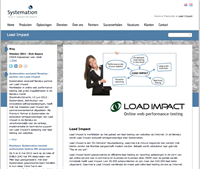 Stockholm/Utrecht, June 14, 2012 - Stockholm-based Load Impact  is signing a premium partnership agreement with Systemation  in Benelux, one of the leading distributors in integration testing and quality assurance in northern Europe. As a Premium Partner, Systemation will actively represent, sell and implement customer projects  for the Benelux market.Load Impact has become a leading provider of cloud-based load tests in just a few years. The company provides a full-scaled partner