Our online newsroom is now at www.gk.news/michelin-agriculture

28 February 2017To access our latest press information, media gallery and PR contacts, please visit our new online newsroom at www.gk.news/michelin-agriculture This newsroom is no longer updated but will continue to serve as an archive.

Stoke-on-Trent, February 14, 2017Kevin Burke Tyres’ (KBT) Athenry depot has been awarded Exelagri dealer status for its agricultural tyre work by Michelin, joining a select group which holds this accolade in Ireland and becoming the first to service customers along the west coast. To join the Michelin Exelagri dealer partnership programme, the depot had to pass a stringent 48-point quality audit that assesses all aspects of the business, from the standard of equipment used to levels of staff training and the quality of advice given. With Exelagri status, farmers and contractors are safe

Stand G33, LAMMA Show, 18-19 January 2017Stoke-on-Trent, January 18, 2017 Michelin is using the occasion of this year’s LAMMA Show to host an exclusive UK preview of its all-new AxioBib 2 tyre range, allowing farmers and contractors to view the new agricultural tyre ahead of the planned international launch in June 2017. The LAMMA Show marks the first time the new tyre range has been exhibited in the UK. From June, the new tyres will be available in two dimensions, Very High Flexion VF650/65 R42 and VF540/65 R30 for 160hp to 320hp tractors with further sizes being added later in the 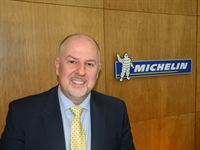 Stoke-on-Trent, January 12, 2017Martyn Pointer, 51, has been appointed Commercial Director of Agriculture at Michelin, with responsibility for the UK, Ireland and the Nordics. He replaces Mike Lawton, who has taken on the position of Head of Communications, after five years in the role. With a background in engineering, Pointer spent more than five years as Head of Regional Business Development at Lex Autolease, before becoming Field Sales Director at Trafficmaster in 2004. He then spent three years as Head of Corporate Sales at Leasedrive, prior to joining tyre specialist ATS Euromaster

Stoke-on-Trent, December 19, 2016Michelin has conducted field trials at Maxwell Farms, near Turriff in Aberdeenshire, to demonstrate the benefits of using a Central Tyre Inflation System with its Ultraflex technology tractor and trailer tyres. The trials compared the differences between a Fendt 939 tractor and the latest generation Stewart Trailers tri-axle tipper when operating at conventional pressures – compared with the ultra-low pressures possible for field operation with Michelin’s AxioBib and CargoXBib High Flotation tyres. When optimised for field operation, these tyres enable

Stoke-on-Trent, December 12, 2016Michelin has chosen the LAMMA Show 2017 to host an exclusive UK preview of its all-new AxioBib 2 tyre range, showcasing the new agricultural tyre to farmers and contractors a month ahead of its planned international debut. The new tyre range will initially be available in two dimensions, Very High Flexion (VF) 650/65 R42 and VF 540/65 R30, and has been designed to meet the rising trend for tyres that can carry large loads at lower pressures. Designed for 160hp to 320hp tractors, AxioBib 2 enables Michelin to offer a patented Ultraflex technology tyre for

Stoke-on-Trent, November 30, 2016Michelin has been awarded the prestigious SIMA Innovation Gold Medal for its new ‘2 in 1’ tyre, which features a smart tread pattern that evolves to match the application. The ‘2 in 1’ tyre, which will be officially revealed at SIMA in March 2017, has been designed to support farmers who increasingly opt for larger machinery that has to perform both in the field and on the road. When set at high pressures for road work, the tyres’ central band grips the road providing the tyre with a road optimised profile. The adapted tread pattern gives a smoother

Stoke-on-Trent, November 09, 2016Michelin has financed more than £1.3 million in agricultural tyres and rims across the past 18 months with its 0 per cent finance credit scheme – helping more than 270 farmers benefit from the company’s premium fitments. Launched in early 2013, the Flexelagri finance programme helps qualifying farmers and contractors from the UK purchase agricultural drive, materials handling and trailer tyres; spreading the cost over 24 monthly payments at a 0 per cent finance rate. The specialist wheel rims required for Michelin’s range of Ultraflex technology tyres can

Stoke-on-Trent, October 12, 2016Michelin Customer Engineering Support Manager Gordon Brookes is urging farmers and contractors to perform fleet audits during the quieter winter months, and guarantee a successful start to 2017. “With harvest 2016 firmly behind us, it’s essential to look to the future and ensure machinery, tyres and wheels are well maintained, in order to hit the ground running in 2017,” explains Brookes. Here are his ‘Top Five’ tips: 1. Check tyres for signs of damage Tyres work hard during the busy summer months and throughout the ever-challenging harvest season. 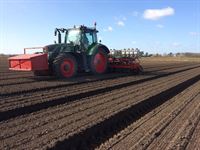 Stoke-on-Trent, September 21, 2016Nottingham’s Sherwood Farming is reaping the benefits after specifying a combination of sprayer and tractor tyres on its high-horsepower Fendt 720 Vario tractor, on the advice of its local Michelin Exelagri-accredited tyre dealership. The company, which farms 3,500 acres of land, required a narrow tyre for inter-row crop work, which would also enable the tractor to tow a fully-loaded 14-tonne trailer during harvest. After seeking the advice of Pete Sampson, Commercial Manager at Tanvic Tyres’ Newark centre, and that of Michelin account manager Ian 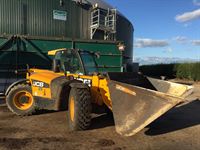 Stoke-on-Trent, September 02, 2016FW & JM Douglas, a mixed beef and arable farming company near Malton, North Yorkshire, has more than doubled tyre life on its JCB 536-60 Agri Loadall after switching to Michelin BibLoad Hard Surface tyres. The 460/70 R 24 BibLoad fitments have clocked up more than 2,000 hours’ work to date – nearly double that recorded by the Michelin XMCL tyres they replaced – and the company predicts the fitments will run a further 1,000 hours before they need replacing. John Douglas, Farm Manager at FW & JM Douglas says: “We were looking for a durable, long-lasting

Stoke-on-Trent, August 05, 2016Suffolk-based K&M Tyres has earned Michelin’s seal of approval for its agricultural tyre work, becoming the latest member of Michelin’s Exelagri dealer partnership programme. K&M Tyres is no stranger to Michelin Certified Centre (MCC) status, having gained accreditation on the truck side of its operations as part of the Michelin Truck Professional (MTP) network and continuing to hold this status more than a decade later. Prior to qualifying for Exelagri status the dealer had to pass a stringent independent 48-point quality audit, which looks at key

Stoke-on-Trent, June 17, 2016Builders’ merchant Solent Building Supplies has replaced its Bobcat skid-steer loader’s Michelin Bibsteel Hard Surface tyres like-for-like, after reporting ‘impressive’ durability despite tough working conditions. The company, which operates within a 30-mile radius of Portsmouth, had previously replaced the Bobcat’s tyres every six to eight months due to damage and wear, before opting to trial the 260/70 R 16.5 Michelin fitments. The Bobcat’s Bibsteel Hard Surface tyres are only now being replaced due to tread wear, after two years on the hard-working

Stoke-on-Trent, March 8, 2016Salisbury-based Simon Jackson Contractors Limited has invested more than £42,000 in new tyres for its fleet in 2015 after taking advantage of Michelin’s 0 per cent Flexelagri finance offer – enabling the cost to be spread across 24 equal monthly payments. The order for 14 pairs of Michelin MultiBib tyres and two sets of AgriBib fitments has enabled the firm to benefit from premium tyres, but without the need to make a large one-off capital investment or to pay for finance. Simon Jackson Contractors Limited, which covers Dorset and Wiltshire for both

Stoke-on-Trent, January 28, 2016Michelin’s new CargoXBib Heavy Duty trailer tyres are now available as original equipment on Stewart Trailers’ latest Road King XV 20 26 S trailer. The agricultural trailer manufacturer chose the 560/60 R 22.5 Michelin fitment as an option for its new trailer after being impressed by the tyre’s reliability and stability while using heavily loaded agricultural trailers on the road and in the field. Tyre choice is a major consideration for the new tri-axle tipper, which was designed to pre-empt the proposed second phase of agricultural tractor and trailer 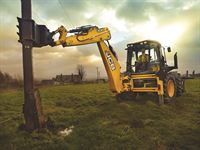 Stoke-on-Trent – December 8, 2015High flotation Michelin XeoBib tyres have been chosen by JCB to be fitted exclusively and as standard to its new pole planting machine, the 4CX Polemaster+. JCB decided to specify Michelin XeoBib VF 600/60 R28 tyres as original equipment on the new machine after comparing a range of alternatives and being impressed by the tyres’ ability to protect soft ground when working in the field. Tyre choice is a major consideration for JCB as the new machine will be used extensively on farm and utility land, making it paramount to offer a standard tyre that will

Stoke-on-Trent – November 26, 2015A South Kildare farmer is benefiting from minimum ground compaction after becoming the first to specify a combination of VF 710/60 R42 and VF 600/60 R30 Michelin XeoBib tyres on a Fendt Favorit 716 – believed to be the largest set of Michelin tyres ever fitted to this model of tractor in Ireland. Neil Thornton, who farms more than 300 acres of land with his two sons David and Luke, chose the fitments following extensive research both on agricultural forums and through consultation with his local Michelin account manager Chris Eakin. The Fendt is one of

Stoke-on-Trent – November 11, 2015Michelin and agricultural machine manufacturer ROPA have been awarded the silver medal for innovation for their R-Soil Protect project by the organisers of Agritechnica. The collaboration between Michelin and ROPA is a hydraulic three-axle chassis for harvesters which spreads the weight of the load and avoids pressure imbalances between the machine’s axles. Michelin’s new CerexBib IF 1000/55 R32 Cyclic Field Operation (CFO) tyres fitted to the chassis and featuring Ultraflex Technology are designed to work in the field at very low pressures. This 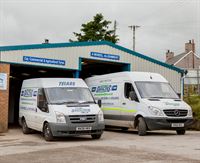 Stoke-on-Trent – October 30, 2015Saracens Tyres has become the first agricultural tyre dealer in North Wales to join Michelin’s Exelagri dealer partnership programme. This sees the company earn its place alongside nearly 800 farm tyre specialists selected by Michelin across Europe. Exelagri status gives farmers and contractors the peace of mind of knowing that their local tyre dealer has all the expertise required to ensure they achieve the maximum performance from their agricultural tyres. Accreditation to the network follows an independent 48-point quality audit which looks at all

Stoke-on-Trent – October 15, 2015A tyre dealer in Monmouth, South Wales, is supporting the future of farming with donations to its local young farmers club. Paul Jarrold Tyres – based on Wonastow Road Industrial Estate and part of Michelin’s Exelagri network of farm tyre specialists – began supporting Gwent Young Farmers’ Clubs almost three years ago, contributing towards the cost of the organisation’s new clubhouse. Since then the company has continued to look for opportunities to lend its support and for the past year has given £50 per month. Gwent Young Farmers’ Clubs runs

Stoke-on-Trent – September 16, 2015Michelin has developed the new CargoXBib Heavy Duty tyre for farmers looking for reliability and stability while using heavily loaded agricultural trailers on the road and in the field. The trailer tyre gives farmers professional efficiency and comfort, with the first size to be available from November 2015. This new generation tyre extends the CargoXBib range and is an additional offering to the CargoXBib High Flotation tyre with Ultraflex technology, launched in 2014. When compared with the previous generation of trailer tyres, the CargoXBib Heavy 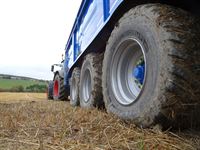 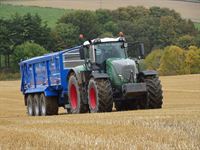 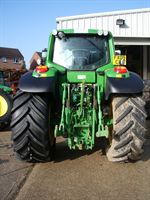 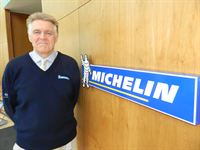 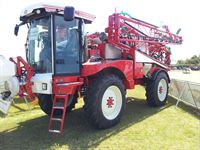 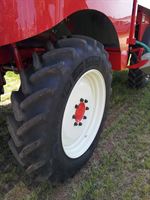 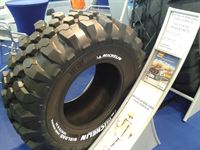