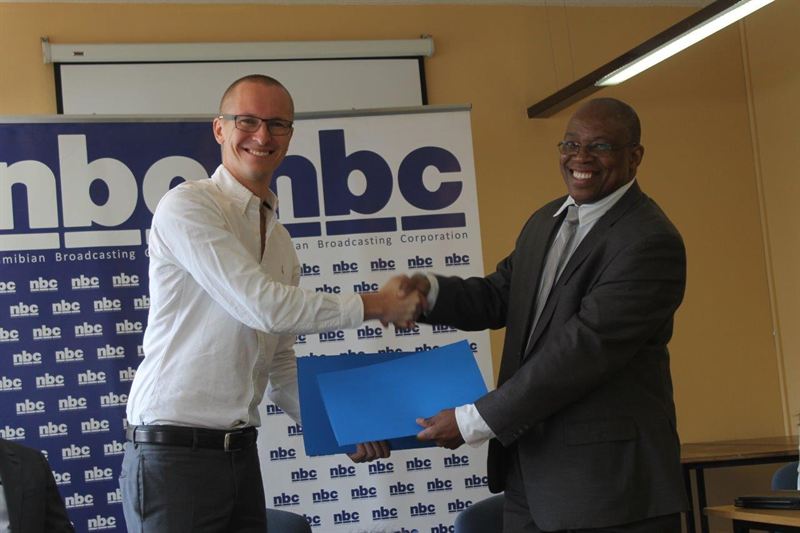 Nepa is happy to welcome The Namibian Broadcasting Corporation (nbc) as a new client and partner after signing an agreement to implement an ActionHub™ during Q1 of 2016.

The ActionHub™ will enable building integrated multimedia planning, production and publication capabilities across the platforms of the nbc, starting with sport and educational content.

The nbc Director General Stanley Similo welcomed the agreement adding that it could not have come at a better time. He said as managers of content on radio and television, the nbc needs to be in the know of its audiences’ preferences. “We are in the business of conceiving and creating programmes for Radio and Television. This task calls for being very conscientious about how we go about in bringing these programmes to life. The latter view is supported by the understanding that whatever is heard or displayed on radio and television, must have been informed by some position that will seek to say: ‘this is what our listeners and viewers want!”.

“We will set up the ActionHub™ and start panel recruitment during January of 2016 - with the goal of continually providing the nbc with actionable insights and the voice of its audience in March.” Niat Sebhatu, Global Account Manager at Nepa commented.

“This is a milestone for Nepa. We are continuing our aggressive growth strategy on a very exciting continent. We are proud to have The Namibian Broadcasting Corporation (nbc) as a new client and look forward to a fruitful partnership.” Said Olle Råghall, Commercial Director of Media & Entertainment at Nepa.

Nbc‘s Purpose is to become a leading Multimedia Public Broadcaster of Choice in the world.  It is the only Namibian broadcasting house that runs radio broadcasting in ten (10) Namibian languages and three (3) Public Service TV channels.  nbc offers local, SADC and international news, current affairs and entertainment programming and covers more than 98% of the Namibian population.  It further broadcasts beyond the Namibian borders on the DSTV audio bouquet and online at www.nbc.na.

Nepa is a company at the crossroads of research, consulting and IT. We use technology and industry expertise to develop innovative and efficient research solutions that go beyond insights and enable action.

By combining survey, behavioral and business data, we make our clients truly customer-centric by tying what consumers say to what they actually do. Connecting the dots between data sets transforms the voice of the consumer into a concrete tool for decision-making with real financial impact.

We call it the ActionHub™.

Headquartered in Stockholm, we have ongoing assignments in over 50 countries across four continents. Local presence in China, Denmark, Finland, India, Singapore, Sweden and the United Kingdom ensures hands-on service for our clients.

Beyond insights, we enable action.

Headquartered in Stockholm, with offices in Norway, Finland, Denmark, UK, USA and India, we help some of the world's most reputable brands in more than 50 countries to optimize customer experience investments and get more effect out of their marketing and sales. Nepa has been awarded DI Gasell's award for organic fast-growing companies in 6 of 7 years since 2011. The company is publicly traded at the Nasdaq First North Growth Market since 2016. Erik Penser Bank AB is Nepa’s Certified Adviser (phone: +46 8-463 83 00, e-mail: certifiedadviser@penser.se).