Paulig and Fairtrade co-operate in development work in Ethiopia

Paulig’s selection includes several Fairtrade coffees, and during the Fairtrade week starting next Monday, we will introduce the new Reilusti Tumma Mundo coffee. In recent years, our co-operation has also taken new forms, as we have launched a project in Ethiopia that aims to increase the profitability of coffee growing, the quality of coffee crops and the well-being of the entire community. 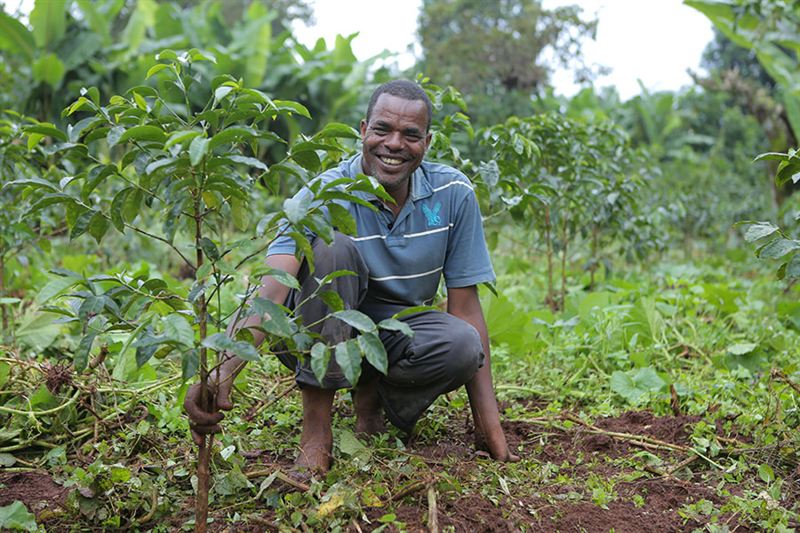 In spring 2016, Paulig and Fairtrade Finland launched a development programme in the Sidama region of Ethiopia to support local coffee growers. The project is also supported by the Ministry for Foreign Affairs of Finland through Finnpartnership.

Coffee is originally from Ethiopia and the country today continues to be a well-respected coffee area from where some of the most flavourful coffees grow. More than 70,000 smallholder coffee growers are members of the Sidama region coffee co-operatives. This area also supplies coffee for Paulig. Currently, Paulig and Fairtrade’s programme covers 12 co-operatives with over 25,000 coffee farmers. The average size of a local farm is less than one hectare with approximately 600 coffee plants. The farms are small, which means that the farmers income remains low even in years with abundant crops.

It was already clear during the pilot phase of the development programme that we would support both small coffee growers and the seasonal workers hired for the farms. We aim to improve the status of the workers through sharing information: the staff hired for the farms during the season must be provided with adequate working conditions, humane working hours and be paid at least the legal minimum wages.

“We began by assessing the starting level, so we now know what the biggest problems are that the small growers in Sidama faced before we launched the project. In addition to productivity, the farmers were concerned that the next generation has no interest in continuing the hard work of coffee growing,” says Teemu Sokka, Fairtrade’s Programme Manager.

“Our project has ambitious goals. We want to encourage the young people in the area to work in coffee growing so that it will not entirely cease to be a local source of livelihood. We aim to train the growers into professionals both in the cultivation of coffee plants and as employers of seasonal labour. At the same time, we will educate the whole community to understand why the use of child labour is not acceptable and how it can be prevented,” adds Sokka.

“We work to ensure the bright future of coffee. We invest in profitable and sustainable coffee farming so that coffee will continue to be a source of livelihood and enjoyment also for future generations. The key factor in the coffee chain is the coffee farmer, trying to make a living and sustain a business while battling problems caused by climate change”, says Katariina Aho, Sourcing Director of Paulig’s Coffee Division.

“We have made a promise that all of our coffee comes from sustainable sources. We make this happen by buying certified coffee or coffee from our development projects.”

Gradual training towards a better standard of living
Changes in growing practices take time, as results can only be seen one season at a time. Paulig is committed to being involved in the Ethiopian partnership programme up to the end of 2021 in order to improve the well-being of the local farmers and increase the volume and quality of crops.

So far, we have arranged vocational training on analysing the quality of coffee, employee management issues, sustainable growing methods and increasing productivity.

Coffee from sustainable sources
In its products, Paulig uses certified coffees, such as Fair Trade, UTZ Certified and Rainforest Alliance, and also Organic Coffee combined with these certificates. In addition, Paulig buys coffee from its countries of origin through carefully selected partnership programmes.

Paulig has already reached nearly 100,000 coffee growers through its partnership programmes. Paulig is a founding member of the International Coffee Partners initiative, established in 2001 and covering about 66,000 farmers. Our co-operation with Fairtrade in Ethiopia supports more than 25,000 coffee farmers. In addition, Paulig is currently initiating new development projects with export companies in Africa and Latin America.

Follow Paulig's work in the countries of origin on social media with the hashtags #paulig, #beanthere and #kahvinjäljillä. Paulig Kulma, the company's Coffee House in the heart of Helsinki, organises "#Beanthere - In the footsteps of coffee” evenings, where we talk about our sustainability work in more detail. For more information on the events, please visit the Paulig Kulma Facebook page.

About Paulig Group
Paulig is a family-owned, international enterprise in the food industry that is noted for its high-quality brands and services. The company’s key divisions are Coffee, World Foods & Flavouring, Snack Food and Naturally Healthy Food. Our brands are Paulig, Santa Maria, Risenta, Gold&Green and Poco Loco. Paulig has 1,900 employees in 13 countries and its net sales were EUR 917 million in 2016.
www.pauliggroup.com

Paulig Group’s Coffee division is the market leader in Finland and the Baltic countries, and in Russia it is the second-biggest supplier of roasted coffee. Paulig supplies its products and services to the retail trade, the HoReCa sector and workplaces through the Paulig Professional business unit. In Finland, Paulig's best-known brand products include Juhla Mokka, Presidentti, Paulig Brazil and Paulig Mundo as well as the coffee beverage Paulig Frezza and the drinking chocolate beverage Paulig Tazza. The most popular products on the Russian and Baltic markets are the Presidentti and Paulig Classic coffees and Paulig espresso products. The company's coffee roasteries are located in Vuosaari in Helsinki, the village of Tolkkinen in Porvoo in Finland and Tver in Russia. The Vuosaari roastery produces about 100 million packets of coffee, or about 45 million kilos of coffee, each year.
www.paulig.com

Paulig was founded in 1876 when Gustav Paulig started his business in the heart of Helsinki. The company is family-owned still today. Paulig offers coffee, food concepts, spices, plant-based products and snacks. The company's brands are Paulig, Santa Maria, Risenta, Gold&Green and Poco Loco. Paulig has operations in 13 countries and sales amounted to EUR 907 million in 2018. The group has 2.130 employees.