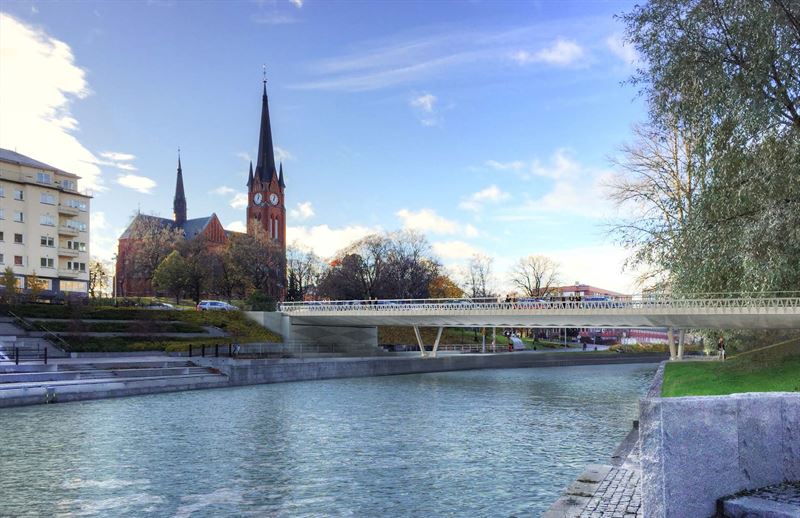 Over the next two years Peab will build a new modern Stor Bridge over Selånger River. The customer is Sundsvall Municipality and the contract is worth SEK 106 million.

The current Stor Bridge is 83 years old, a respectable age, and because of its low carrying capacity the bridge needs to be replaced. The new bridge will span 18 meters and have three car lanes as well as two pedestrian and bicycle paths.

“Ever since 1936 the Stor Bridge has been a central part of Sundsvall and naturally we are very pleased to be involved in building a completely new bridge. I look forward to the new bridge lasting at least as long as the old one,” says Jörgen Eriksson, Region Manager Peab.

The project also includes building a new pier and wharf along the Selånger River together with the groundwork and work on streets connected to the bridge.

The project is a turnkey contract. Construction will begin in September 2019 and is expected to be completed in October 2021. The project will be order registered in the third quarter of 2019.

The new Stor Bridge will be an improved version in many ways. Accessibility will increase for both pedestrians and bicyclists since it will be built with a broad pedestrian and bicycle path on either side of the bridge. The new bridge will also have a free height of 4.60 meters which improves passability for both mass transit and goods traffic. This free height will make Ågatan, with its connection to Storgatan, very useful.

“We are building a newer, safer and more modern bridge while we increase spaciousness and contact with the water. We also open up the Selånger River since we are widening the river to reduce the risk of damages when the river runs high,” says Stefan Näslund, section head of the street department in Sundsvall Municipality.

The piers between the Stor Bridge and the IBM building on both the northern and southern sides of the Selånger River will be rebuilt to ensure their long-term carrying capacity and formed to fit in with the new design of the area, following what has already been done downstream of the Stor Bridge.

When the Stor Bridge is finished the provisory bridge will be removed. When the piers are ready Badhus Park will be freshened up as the final stage of the project.