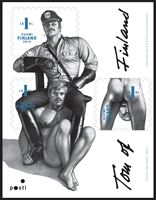 Seta – LGBTI Rights in Finland awards annually its “Apple of Good Information” honorable mention to someone who has contributed positively to the situation of sexual or gender minorities. According to Seta, Itella Posti’s stamp collection featuring the art of world famous Tom of Finland, to be published in the autumn, is a “significant cultural achievement and an example of how a company can positively use the ideas of sexual orientation and gender diversity in its business operations”. The Tom of Finland stamps will be published in honor of one of Finland’s best-known artists. Itella

In addition to half a million kids, thousands of adults from all around the world send letters to Santa Claus every year. A study has been conducted in Finland on adult letters with the goal of finding out what is their idea of Santa Claus. The most common idea is that Santa Claus is like a saint, a messenger of good hope who sets an example in being kind. The deepest and most sensitive wishes in the letters are expressed to a god of love, and the senders ask the god to help them find the love of their life. Even in the very secular culture of today, Santa Claus seems to be a powerful

Every year, Santa Claus receives more than half a million letters from children and adults from 200 countries, and sends Christmas greetings all over the world from the Santa Claus Main Post Office located in the Arctic Circle in Finland.Aside from Finland, Santa Claus received the most letters in 2011 from Great Britain, Italy, Poland, and Japan. In particular, Chinese friends of Christmas have shown a growing interest towards the true Santa Claus in recent years. Remembering friends with a Christmas greeting has always been highly popular in Finland. In China, sending Christmas

Order a letter from Santa online or with your tablet

Every year, Santa Claus receives approximately 500,000 letters and postcards sent by children and adults from all around the world to the Finnish Arctic Circle. Since the 1990s, customers have also had the opportunity to order letters from Santa. Santa always keeps up with the times, so you can order a letter from Santa online or using a tablet app. Santa and his helpers speak 11 languages! The available languages include Finnish, Swedish, English, German, Japanese, Chinese, French, Spanish, Russian, Italian and Dutch. The letter is sent from Santa’s Main Post Office in Rovaniemi in the

Although there has been a slight decline in the sending volumes of Christmas cards, the card tradition is alive and well. Three consumers in four say that they will send traditional paper greeting cards this year. Receiving holiday season cards is almost always considered as a positive thing.This year, Finns intend to send an average of 17 traditional Christmas cards, and one-third of Finns intend to send more than 20 cards. Many also send digital season's greetings, such as text messages and Facebook messages, but the average number of recipients is smaller than that of traditional cards.

Finnish Sámi Cultural Centre SAJOS gets its own stamp

Use your smartphone to order a letter from Santa

Every year, Santa Claus receives hundreds of thousands of letters from all around the world, addressed to Santa's post office at the Finnish Arctic Circle. Since the 1990s, customers have also had the opportunity to order letters from Santa. Santa always keeps up with the times, and this Christmas Itella Posti Oy offers a new service: you can order a letter from Santa using your smartphone! You can get the Santa's Letter phone application free of charge from App Store, Android Market or Ovi Store. Ordering a letter from Santa costs €7. The letter can be paid for with Visa and Euro/

Itella's mail delivery trial to test alternative future mail delivery methods will start on Thursday, April 15, in the Anttila Village of Porvoo. The trial will not be immediately launched on a full scale; instead, it will be gradually expanded as the participants get the necessary training and start using NetPosti. The objective is for the trial to be in full swing within two weeks. The trial will end at the close of 2010.More than 140 households and companies are voluntarily participating in the trial. They will receive their daily mail in a completely new manner that combines traditional