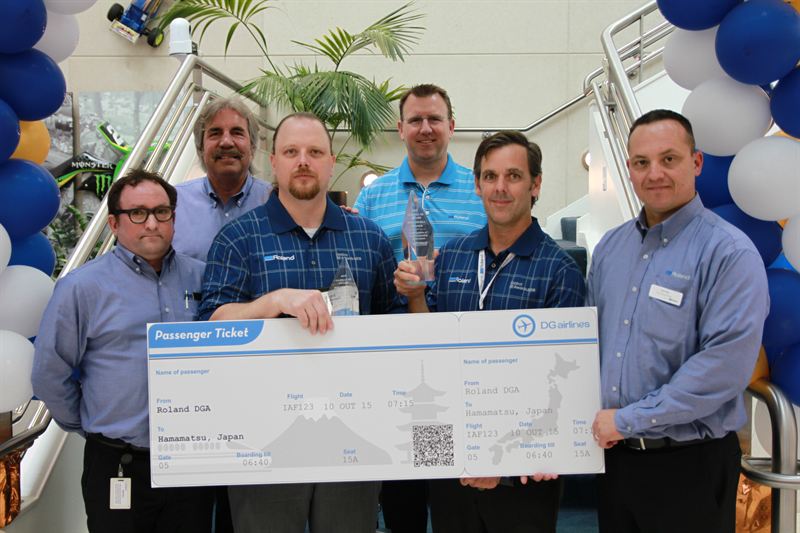 Roland DGA has announced the two winners in the North American regional finals of Roland’s Global SE Awards competition, held June 9-10 at the company’s headquarters in Irvine, Calif. The winning Roland Service Engineers – Greg Hulbert with Florida Graphics Supply in Clearwater, Fla. and Terry Carpenter with Far From Normal in Fargo, North Dakota, outperformed 10 other finalists in a series of intense written exams and hands-on troubleshooting tests conducted over the two-day period.

Having proven their advanced technical skills in the regionals at Roland DGA, Hulbert and Carpenter will move on to compete against the world’s best Roland Service Engineers in the Global SE Awards, which will take place in October 2015 at the headquarters of parent company, Roland DG, in Hamamatsu, Japan.

According to Roland DGA’s Knowledge and Training Manager, Tom Klein, the level of proficiency demonstrated by all of the Roland Service Engineers participating in the regional finals was truly impressive. “Roland is renowned, not only for the quality of its products, but also for the world-class service and support it provides for its customers,” said Klein. “The dedication, professionalism and expertise shown by our SEs in this regional competition reflects our commitment to providing Roland users with best service in the industry.”

Over the course of the two-day event, the 12 regional finalists took part in various tests and challenges administered during timed “cells” that recreated specific printer troubleshooting and repair scenarios.

“With more than 15 years of Roland service experience under my belt, I felt good about my chances of winning heading into this competition,” noted Hulbert. “That was until I discovered how intense and demanding these tests and exercises really were. They were extremely challenging, and the fact that I was competing against the most accomplished and experienced SEs in the Americas really kept the pressure on. By the end of the competition, I had no idea if I was among the top finishers.”

Like Hulbert, Carpenter was quick to point out the intensity of competing at such a high level. “The truth is, all of these guys came into this event with the experience and know-how to win,” he said. “The bar is set high with authorized Roland Service Engineers, and I was constantly aware that I was up against the best of the best. I gave it all I had, but I wasn’t sure if it was enough to win. I was thrilled and honored to learn that I will be moving on to compete in Japan for the coveted title of World Champion.

Both Hulbert and Carpenter noted that, because Roland printers are so durable and reliable, it’s extremely rare that they get a chance to work on relatively newer models. “Nearly all of the printers we receive for repair are older models that have provided their owners with many years of solid performance,” said Hulbert. “The newer models are so dependable, we hardly ever see any of those printers around the shop.”

Roland DGA Corporation serves North and South America as the marketing, sales and distribution arm for Roland DG Corporation.  Founded in 1981 and listed on the Tokyo Stock Exchange, Roland DG of Hamamatsu, Japan is a worldwide leader in wide-format inkjet printers for the sign, apparel, textile, packaging and vehicle graphics markets; engravers for awards, personalization and ADA signage; photo impact printers for direct part marking; and 3D printers and CNC milling machines for rapid prototyping, part manufacturing and the medical and dental CAD/CAM industries. Roland DGA is ISO 9001:2008 certified, and Roland DG is ISO 9001:2008 and 14001:2004 certified.