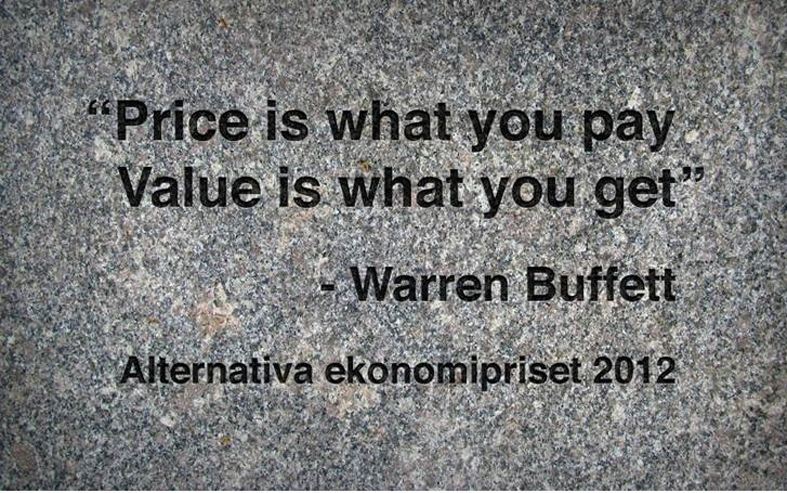 “Warren Buffett has during more than 55 years of long-term investing strategy a remarkable record of investment success and is considered the most successful investor in the world. The Sveriges Riksbanks Prize in Economic Sciences has been criticized because of the complex financial solutions that some of the nominated prize winners present. Formulas, that in a way has been the reason for the short-termism that is increasing in the financial industry. By paying attention to the lifetime achievements of Warren Buffett, and pointing out that long-term investment is a lot more profitable than short-termism, more savers and investors would have him as a good example”, says Per H Börjesson, Managing Director of Investment AB Spiltan.

One of the modern financial theory’s most important thesis is the Efficient-market theory which claims that all available information about a share is reflected in the prize of the share. The proponents of the new theories argue that the success of Warren Buffett is explained as sheer luck (more than 20 percent of annual returns). Buffett replies that even though the market often is efficient it doesn’t mean that it always is. Herein lies a huge difference. If Buffett and other successful investors were to be explained as merely lucky is there a chance that a monkey placed in front of a keyboard would be able to write Hamlet by Shakespear.

“The problem with advanced financial formulas with Greek letters is that it tries to explain all financial activities. This may work in natural science but not in economic contexts since human behavior is seldom rational therefore in economic reality unforeseeable things happen that can mess up the models. To award the alternative prize in economics to a real life practitioner would show that models can give a good picture of reality but there are other ways that work to, continues Per H Börjesson.

Being a great admirer of the long-term investment philosophy of Warren Buffett, Investment AB Spiltan has invested in a long lasting rock carving to honor him with the below inscription.

This Rock Carving is located in Tanum on the Swedish west coast, close to the World Heritage Listed Rock Carvings of the Tanum region that constitute an outstanding example of Bronze Age art of the highest quality.

Investment AB Spiltan (Spiltan) is an investment company with a total share capital of 200 million SEK invested particularly in unlisted companies. Spiltan, who has around 1700 shareholders, is the biggest owner in the financial service companies Alternativa aktiemarknaden, Spiltan Fonder and Mfin.se. The share is traded once a month on Alternativa aktiemarknaden. www.alternativa.se. More information on www.spiltan.se.