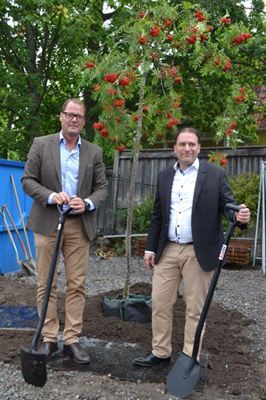 The Mayor of the Municipality of Danderyd, Olle Reichenberg, turned the first sod along with Staffan Sälg, CEO of Studentbacken, at the groundbreaking ceremony for BRF Twin House on August 25.

The event was also attended by Leif Gripestam, Mayor of the Municipality of Täby, Erik Westin, Deputy Managing Director of Akademiska Hus and Veronica Sällemark, Chairman of SSCO (Stockholm Federation of Student Unions). Since production had already started, a hanging Rowan tree was planted and after the ceremony, one of the buyers had the honor of cutting the first piece of the cake modeled after one of the buildings of BRF Twin House.

The project, which is the first of its kind in Stockholm, includes 30 tenant owned apartments for students. The property is located in Djursholms Ösby, an easily accessible area serviced by the Roslagsbanan rail system, buses and subway. Interest in the new project is high and most of the units were already sold before the end of 2015. Studentbacken’s vision is to build space-efficient student apartments with high quality and smart solutions. All of the units in BRF Twin House offer a specially built bed with storage space, a kitchen table designed for eating, working and studying, and an integrated sound system in the kitchen. The framework of the building will be delivered in a few weeks and the first students will move in at the beginning of 2017.

- We’re very proud and happy to be standing here today. A lot of work has gone into this project and now it’s finally in production. The market is getting a highly demanded product that also contributes to the diversity of the housing market and the location has an excellent access to public transportation and proximity to several major academic institutions including KTH and Stockholm University, says Staffan Sälg, CEO of Studentbacken.

Studentbacken AB, a part of SSM
Studentbacken AB is owned by Student Hill Sweden AB and SSM Holding AB (publ) and is a property development company focused on project development and the production of residential properties for students in Stockholm. SSM is a project development company in the Stockholm region. Its vision is to offer a housing market open to as many people as possible. The company differentiates itself by building for a very specific target group – tomorrow’s Stockholmers – and its ambition is to develop the Stockholm region’s most attractive homes. For this reason, SSM focuses on building affordable homes for one to two people with the maximum functionality per square meter, close to the city center and near public transportation. In 2015, SSM started construction of 547 homes. Read more at www.ssmfastigheter.se