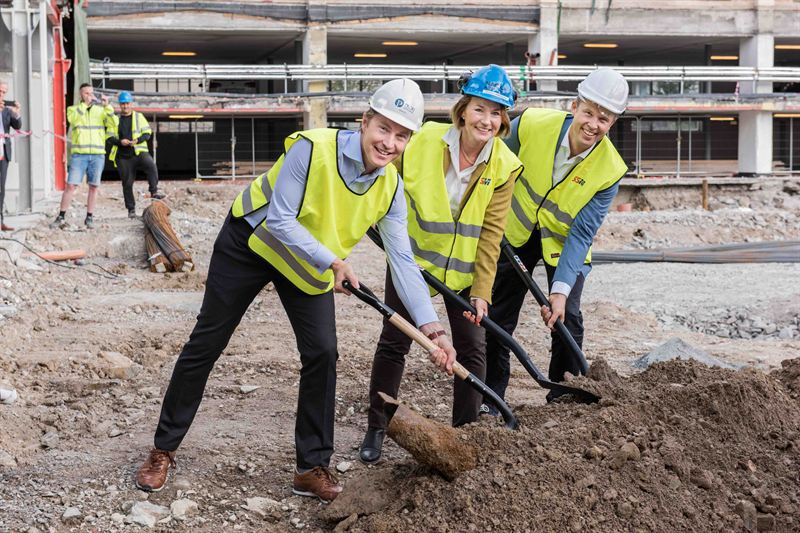 About 100 people were on site yesterday when the symbolic first sod for BRF Turbinhallen was turned.

Holding the spade was Cathrin Bergenstråhle, Councilor of Nacka municipality. Other participants included city planning director Gunilla Glantz as well as representatives from SSM and Profi Fastigheter
together with many eager buyers.

The Turbinhallen project is a joint venture between SSM and Profi Fastigheter involving 205 cooperative apartments in the old Gustav de Laval factory in Nacka, just outside of Stockholm. The development combines reconstruction and new construction with a focus on preserving the original industrial feeling of the building, and the units vary widely in both size and character. The area can be described as a waterside idyll close to everything the big city has to offer and the interest in the project is high.

- It’s fantastic to see that so many people came out to share this moment with us. This is our first joint project with Profi, and we’re very satisfied with our cooperation. A lot of work has gone into this project, especially when it comes to preserving the building’s cultural-historical value and at the same time offering modern homes for tomorrow’s Stockholmers, says Mattias Roos, CEO of SSM.

All of the units have been sold and the first buyers will start moving in during the fall 2017.

- We’ve had this property in our possession for eight years, and it’s really exciting that it is being converted into housing. The journey has been long and we started planning early on how to develop the property in line with the urban development in Nacka. We are very proud to be here today to kick off production together, says Thomas Sipos, CEO of Profi Fastigheter.

SSM is a property development company in the Stockholm region. Its vision is to make the housing market more accessible. SSM sets itself apart by building homes for tomorrow’s Stockholmers and aspires to offer the most attractive apartments in the Stockholm area. To reach this goal, SSM specializes in developing affordable homes for singles and couples with the highest functionality built into every square meter, close to the city center and public transportation. In 2015, SSM started building 547 homes. Read more at www.ssmfastigheter.se

Profi Fastigheter is an independent real estate company with a focus on Sweden’s growth regions, in particular the greater Stockholm area. Its holdings amount to 400 000 square meters of commercial space. Profi Fastigheter has 35 dedicated employees with a wide range of skills. The company is an active owner that manages, improves and develops properties. Profi Fastigheter builds long-term relationships with tenants, investors and society as a whole. Read more at www.profi.se