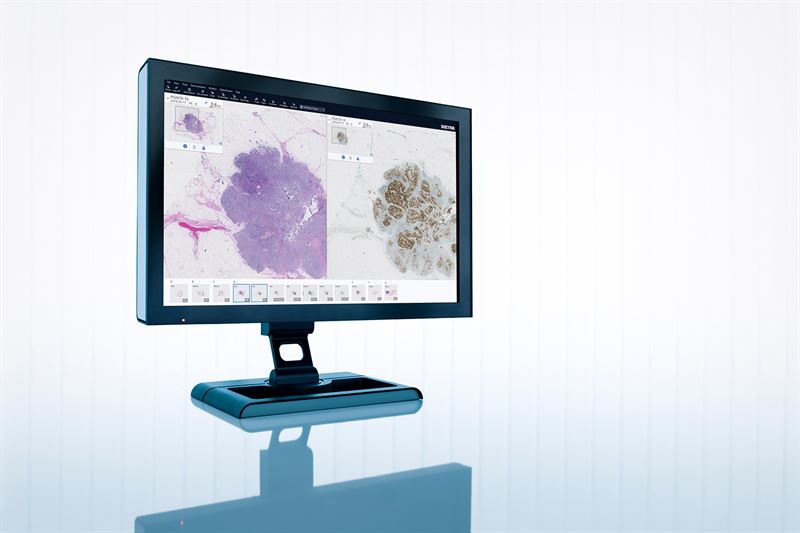 Linköping, Sweden and Paris, France – March 25, 2021 – GHU Paris psychiatrie & neurosciences has ordered a digital pathology solution from international medical imaging IT and cybersecurity company Sectra (STO: SECT B). The digital technology will maximize workflow efficiency and improve collaboration between pathologists, pushing the limits even further within the field of neuropathology. This will ultimately lead to more accurate and faster diagnoses for patients, which is key when deciding on a suitable treatment, especially in precision medicine.

“As an expert center in neuropathology, we process a high volume of second readings from other centers, especially within rare tumors. Having access to image analysis tools is therefore a huge advantage for us. With Sectra, we now have these tools in hand, and because the solution is easy to use, our pathologists will be able to utilize the benefits from day one,” says Professor Pascale Varlet, pathologist at GHU Paris psychiatrie & neurosciences.

Brain tissue samples analyzed by GHU Paris are either collected at their own site or received from other hospitals. By scanning tissue samples to digital images instead of using physical glass slides, pathologists can access and share current and historical images and information from anywhere at any time. Furthermore, Sectra’s solution provides pathologists with assistance at critical decision points, such as grading or performing more precise measurements. It also enables image analysis, which in turn reduces variation and improves the precision of tasks such as cell counting.

“Digital pathology is taking off in France. I’m excited to support GHU Paris in their journey as one of the early adopters and proud that Sectra has once again been chosen to help drive the field forward. Ultimately, digitization will bring so many benefits to, for example, cancer patients,” says Fabien Lozach, Managing Director of Sectra in France.

Once live with the system, GHU Paris will also be able to increase efficiency during multidisciplinary tumor board meetings (MDTs) since a digital setting makes it possible to display different types of patient data side by side and thereby provide more meaningful discussions. Furthermore, there will no longer be a need to meet physically during MDTs. This is a big advantage for GHU Paris since they are in close contact with pathologists and doctors at other hospitals as part of their participation in RENOCLIP, a national network managing rare tumors of the central nervous system.

The contract was signed during the third quarter of Sectra’s 2020/2021 fiscal year.

Sectra’s pathology solution is part of its enterprise imaging offering. It provides a unified strategy for all imaging needs while lowering operational costs. The scalable and modular solution, with a VNA at its core, allows healthcare providers to grow from ology to ology and from enterprise to enterprise. Read more about Sectra’s enterprise imaging solution and why Sectra PACS has been ranked “Best in KLAS” for seven consecutive years at medical.sectra.com.

About GHU Paris psychiatrie & neurosciences
GHU Paris psychiatrie & neurosciences  was founded on January 1, 2019, following the merger of three hospitals: Maison Blanche, Perray-Vaucluse and Sainte-Anne. With a total of 60,000 active patients, GHU Paris’s services are used by one in 40 Parisians. GHU Paris’s neuropathology unit is part of the Neuro-St-Anne clinic and collaborates closely with the hospitals affiliated with Paris Descartes University: Cochin, Necker and HEGP. GHU Paris is an expert center in neuroscience and is part of RENOCLIP, a national network specializing in rare tumors of the central nervous system. For more information, visit ghu-paris.fr

About Sectra
Sectra assists hospitals throughout the world to enhance the efficiency of care, and authorities and defense forces in Europe to protect society’s most sensitive information. Thereby, Sectra contributes to a healthier and safer society. The company was founded in 1978, has its head office in Linköping, Sweden, with direct sales in 19 countries, and operates through partners worldwide. Sales in the 2019/2020 fiscal year totaled SEK 1,661 million. The Sectra share is quoted on the Nasdaq Stockholm exchange. For more information, visit sectra.com.