Consumers have a superficial understanding of direct-to-consumer (DTC) genetic testing products. However, prices, privacy concerns, and a lack of transparency make them less attractive to many potential customers. In a new study* by Simon-Kucher & Partners, end users were asked about their perceptions and knowledge of over-the-counter genetic tests.

Cologne, November 6, 2019 – While 86 percent of study participants have heard of DTC genetic tests, only about five percent have purchased a kit themselves. The study examined four types of DNA self-tests. In addition to ancestry reports, participants were asked about predictive tests, which enable early diagnosis of diseases; carrier status reports, which determine whether the subject is a carrier of diseases that can be passed down to their offspring; and nutrigenomic tests, which look for relationships between the subject’s genome, diet, and health to create a personalized exercise and nutrition plan. The procedures for these tests are all the same. After receiving a test kit, the customers will take a saliva sample themselves. They then send the kit to a predetermined laboratory for examination, and the results will be sent back to the consumer within three to five weeks.

Consumers’ level of awareness of each test varies significantly. Eighty-five percent of participants have heard of ancestry reports, while only one third have heard of nutrigenomic tests. Compared to other tests, consumers are best informed about ancestry testing. It is interesting to note that most participants learned about these tests from their friends and family or the internet, with only six percent receiving this information from their physician.

A physician’s recommendation is a crucial factor in the customer’s decision to purchase one of these kits. About 75 percent of participants see this as one of the most convincing reasons to purchase a genetic test. “Since patients often have doubts about the validity of the data, a referral from their doctor is very valuable. Genetic testing suppliers shouldn’t underestimate this,” advised Chris Rebholz, Partner and industry expert at Simon-Kucher & Partners. However, providers need to make it as convenient as possible to carry out these tests, as 36 percent of participants say they prefer a purely online process without any interaction with physicians. 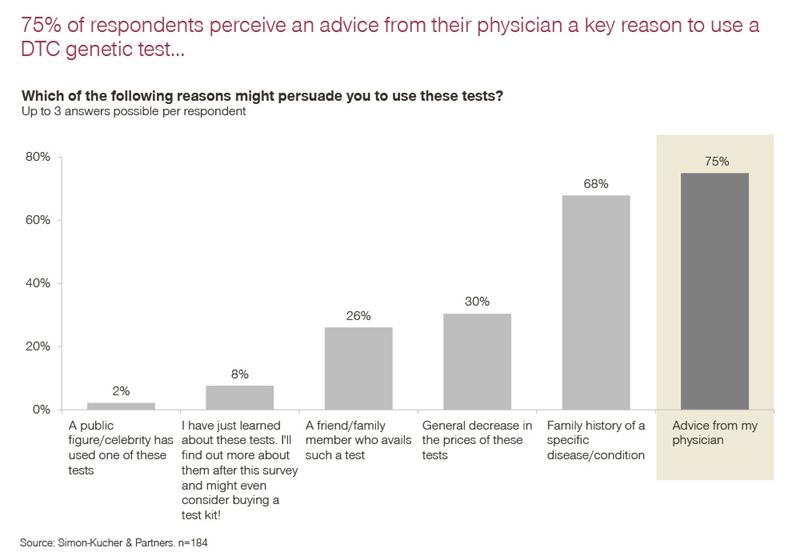 Cost is an obstacle

Putting cost aside, the willingness to take these tests is extremely high. Nearly half of the participants said they would use a DTC genetic test kit with a high likelihood, with predictive tests for early diagnosis of diseases being the most popular choice. If patients have to pay for the tests themselves, their willingness to pay for most tests is in the low three-digit range.

​Many people still regard these tests with skepticism. Besides price, these concerns are mainly focused on data privacy. For tests looking for genetic markers of disease risk factors, participants have particular reservations about the accuracy and transparency of the data. Dr. Michael Keller, Senior Director at Simon-Kucher, said, “It's surprising that very few study participants would reject the tests due to ethical concerns, such as newborn screening. Personal data, on the other hand, is a very sensitive topic, and providers should make sure users feel protected and that their privacy is guaranteed.”

*About the study: In the summer of 2019, Simon-Kucher & Partners surveyed 184 consumers from 28 countries on their perceptions and knowledge of ancestry, predictive, carrier status, and nutrigenomic tests as part of the online “Direct-to-Consumer Genetic Testing” study. The study was conducted by Dr. Michael Keller and Clarita Simon.