The Marketing Champions is a full service Marketing, promotion and public relations company. We specialize in musicians.

Homeless For The Holidays 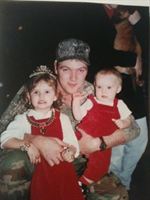 Surely This Can't Happen to Honest, Hardworking Single Parents?Mark Stone, from Sherwood Arkansas, had a normal life. He married his young sweetheart and they had two beautiful daughters together. He was living what was the perfect life to him.  It all started to crash when his young wife left, leaving him with custody of his two young daughters. Mark, as devastated as he was, took the bull by the horns and took on the role of single Father.  Mark worked hard, he took the girls into his work at night as a maintenance man for a local hotel.  He would put them in an unoccupied room, in

November 2nd in Ashland KY, emerging Pop Artist, Tyler Matl is presented with the Pop Entertainer of the Year award at the IMEA's first annual awards show.The First Annual International Music and Entertainment Association Awards show was held on November 2nd at the Paramount Arts Center in Ashland Kentucky. The night began at 6pm with nominees and attendings walking the red carpet.  Amoung the nominees was 19 year old emerging Pop Artist, Tyler Matl.  Matl is no stranger to the red carpet and in 2013 has already won TSAI's coveted songwriter of the year as well as song of the year for