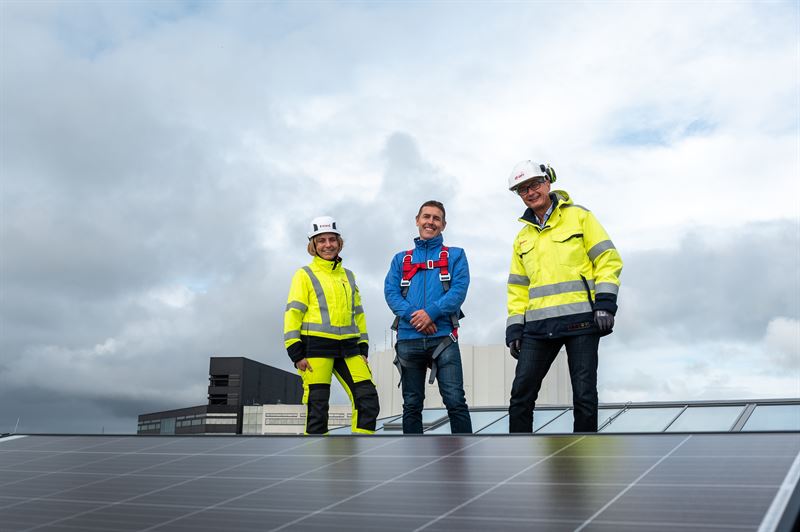 Wihlborgs has just implemented its largest solar power system yet. Low climate footprint solar cells have been installed on Nya Vattentornet 3, one of Wihlborgs’ properties in Lund, and is the largest solar panel facility of its kind that E.ON has installed in Sweden.

The solar panels that now adorn the roof of the Wihlborgs’ property Bricks (Nya Vattentornet 3) in the Ideon Science Park in Lund have a lower climate footprint than standard panels. This is largely because the panels were produced with material that has a smaller climate footprint during the manufacture and mining of silicon. They were also assembled in Europe, which further reduces shipping and therefore their climate footprint.

“For Wihlborgs, it was important to choose a European supplier with a focus on a lifecycle perspective. If we can optimise climate benefits by installing panels with a smaller climate footprint, that’s a good investment. We value taking a comprehensive viewpoint in our purchases. Solar cells are an important part of our climate agenda, since they improve the environmental performance of properties and increase the amount of renewable energy in the energy grid in Skåne,” says Staffan Fredlund, Environmental Manager at Wihlborgs.

With an area of 2,500 square metres, the solar power system is the largest yet for Wihlborgs and is one of the largest facilities that E.ON has installed in Sweden where the customer has chosen low climate footprint panels. The estimated annual production is approximately 247,000 kWh, which is the equivalent annual household energy consumption of approximately 70 apartments. The facility is owned and managed by Wihlborgs.

“Our partnership with Wihlborgs really shows that companies are serious about their sustainability ambitions. We’re pleased with the partnership and together we’re creating the conditions for locally produced electricity and a transition to sustainable energy,” says Carina Tollmar, Sustainability Manager at E.ON Sverige.

The installation is part of a long-term solar cell partnership between Wihlborgs and E.ON. The preparation phase will begin soon for installing solar cells at a further two properties, Node (Vattentornet 2) and Cube (Vattentornet 4), in the eastern part of Ideon Science Park. Bricks has been environmentally certified in line with SGBC In-Use (Sw: Miljöbyggnad iDrift), and Node and Cube in line with LEED.

About SGBC In-Use SGBC In-Use is a certification that focuses on the indoor environment, health, climate impact, resources and the condition of the building. Mandatory requirements comprise an important element and include tenants’ impact on the building’s environmental performance, which means the process leads to closer dialogue and collaboration between Wihlborgs and its tenants.

Wihlborgs’ environmental goals regarding solar cells: One of Wihlborgs’ environmental goals is to have solar power systems in place with an aggregate maximum power of 3 MWp (megawatt peak, or maximum output) by the end of 2022 and for all purchased energy at properties to be renewable. To date this year, two new facilities have been completed and six photovoltaic cell projects are ongoing. These initiatives have an aggregate operating maximum power of 1 MWp, which is expected to produce approximately 1,000 MWh of renewable energy annually. Wihlborgs had a maximum power of 1.6 MWp from the 30 facilities in operation at the end of 2020.

Wihlborgs Fastigheter AB (publ) is a property company that focuses on commercial properties in the Öresund region. Its property portfolio is located in Malmö, Helsingborg, Lund and Copenhagen. In Malmö, Lund and Helsingborg, Wihlborgs is the leading property company. The book value of the company’s properties totals SEK 47.1 billion, representing an annual property rental value of SEK 3.3 billion. Wihlborgs’ shares are listed on the Large Cap List of Nasdaq Stockholm.