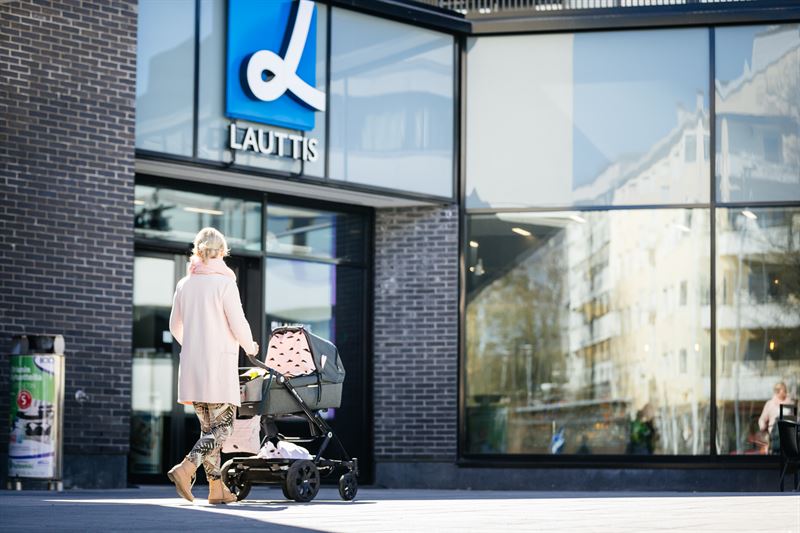 The global trend of urbanisation has increased the popularity of urban living and denser construction. The Sustainable Urban Environments 2018 barometer, commissioned by YIT, supports this view: as many as 68 per cent of the people who live in city centres are in favour of a denser urban structure. Homes, shops and transport options are all under one roof at Lauttis.

Lauttis is located in the heart of Lauttasaari island in Helsinki, along the island’s main road, Lauttasaarentie. While there were already shops and other daily consumer services operating at the same location previously, the new shopping centre that has served the island’s residents for the past couple of years has made daily life in Lauttasaari even easier than before. Lauttis provides not only a wide range of shopping centre services, such as supermarkets, a pharmacy, cafés and restaurants, but also convenient access to central Helsinki and Espoo via the Lauttasaari metro station. There are also three housing companies under the same roof, with 136 apartments in total. One of the apartments is a two-bedroom unit occupied by Anja Niini and her husband.

After their children flew the nest, they decided to move from the family home, a three-story terraced house, to a smaller apartment in a 1980s building on Lauttasaari island. The beautiful seaside environment with parks and walking routes appealed to the couple.

“The sea makes its presence felt here on the island. The weather is often quite windy. There are several beaches that are suitable for children,” Niini says.

The couple reserved an apartment in Lauttis at the earliest possible opportunity and signed the purchase agreement in autumn 2015. They moved in after Lauttis was completed in early 2017.

“It was important for us to have a new home with convenient access to the services you need in daily life. Here we have shops, restaurants, other services and an indoor parking spot all under one roof. There’s also a health centre nearby,” Niini adds.

Urban living projects such as Lauttis have grown in popularity in recent years. Urbanisation, the increasingly dense urban structure and the ageing of the existing building stock are constantly increasing the need for urban development and infill development. The Sustainable Urban Environments 2018 barometer*, commissioned by YIT last autumn, revealed that as many as 68 per cent of the people who live in city centres are in favour of a denser urban structure. Some 58 per cent of the same respondents were in favour of infill development in their neighbourhoods if such development would bring more purchasing power and shops to the area.

Tripla in Helsinki’s Pasila district is also a hybrid project like Lauttis, although much larger in scale. Other examples of urban development projects that combine housing, comprehensive services and good transport connections include Konepaja and Kalasatama in Helsinki, the Oulu railway station projects, Asemanranta in Hämeenlinna and Fabriikki in Turku.

But why is full-service urban living so popular?

The Niinis’ highest priority in choosing their new home was convenience, which is provided by the services offered in the shopping centre.

“It’s so nice to be able to just go downstairs to the supermarket and pick up freshly baked Karelian pies for breakfast. When we come back from our holiday home late in the evening, the shops are still open and we can easily pick up some groceries,” Niini points out.

The Niinis’ key criteria in choosing their new home included not only services such as the maintenance company and property management, but also a lift that takes them up straight from the street level without having to go up any stairs. The retired couple thought this would be useful as they get older.

“It’s important to have indoor parking in the same building so you don’t need to go slipping and sliding across an icy parking lot. When we get too old to drive, we’ll have the metro right here and the shops downstairs are safe to get to, even with a walking frame,” Niini says.

According to Marko Oinas, the Vice President in charge of Strategy & Development in YIT’s Housing business, convenience is often a key consideration in urban living. People’s priorities have changed: a large house in the suburbs, far from everything, is no longer an attractive proposition. Instead, they want their homes to be in lively locations, close to services and public transport. The popularity of urban living can also be attributed to the global trend of urbanisation and the trend of smaller households. While small households are increasingly common, Oinas says urban living is not only for single or two-person households.

“What we are seeing in our customer base is that families with children who are accustomed to the availability of services a city provides, and appreciate that convenience, are increasingly deciding to stay in city centres instead of moving out to the suburbs,” Oinas says.

Thanks to newly developed properties, families can live in modern homes in the urban environment that have been designed to serve the needs of families, with playgrounds, health services, schools and day-care centres nearby.

Urban construction requires forecasting and listening to the residents

According to Oinas, the most significant benefits that urban living has for society as a whole are related to climate targets and the principles of sustainable development, such as reducing the use of private cars. Benefits can also be achieved through greater efficiency in the energy consumption of properties, the infrastructure of the urban environment—such as water and waste management—and the use of roads, bridges and public transport. Building a dense urban environment has advantages compared to suburban neighbourhoods: when an area has sufficient purchasing power, there will also be more services on offer.

In spite of all this, urban living is not for everyone. People have diverse preferences when it comes to housing. This view is echoed by the Tribe survey carried out by YIT: the motives related to housing and living vary a great deal. While some people prefer living in a single-family home or a terraced house, with the privacy, peace and living space this provides, others get more enjoyment from being close to the excitement of urban life. The key is to identify different target groups and motives and to build the right homes for them.

“Another thing that is highlighted in urban planning is recognising hidden trends and needs. You need to recognise what people will value in the future,” Oinas explains.

According to Oinas, emphasising sustainable development and eco-friendliness is an emerging trend that needs to be taken into consideration in new projects. Among other things, it includes waste management and greater control over energy consumption. As area development is often a long process, the developer also needs to have the ability to predict the future.

“The Konepaja neighbourhood, for example, has been under construction for nearly 15 years. Many details, such as parking, outdoor walkways and the frames of the buildings, which influences the layout and design of the apartments, needed to be finalised in the early stages of planning,” Oinas points out.

Being open to the residents’ wishes is also important. Oinas says everything starts from customer insight. Even in the plot acquisition stage, you need to consider what kinds of apartments will be built and what the target market is. Completed projects can help increase customer insight and gather lessons regarding the direction of development for new projects.

The significance of public transport is highlighted in people’s preferences

The Niinis’ apartment is practically right above the metro station. Take the lift downstairs, go down two escalators and you are there, without having to step outside. According to Anja Niini, having quick access to the metro has been very useful.

“The metro is such a fast way to get to central Helsinki that it has lowered the threshold of going to enjoy the hustle and bustle of the city. We had fairly good transport connections where we lived previously, but now we can just leave our car at home when we need to go to the city centre,” Niini explains.

Oinas points out that the current statistics on housing sales are already highlighting the significance of public transport in people’s preferences. They want public transport connections nearby to make daily life easier.

“Few people want to spend more time than necessary to travel between the home, work and hobbies,” Oinas says.

In addition to the mobility perspective, Anja Niini says the best aspects of Lauttis include the convenience of living and the relaxed atmosphere created by having a diverse range of residents, from young couples to families with children and retired couples.

“It has been easy to feel right at home in a building with people of all ages,” Niini concludes.

*The Sustainable Urban Environments barometer was implemented for the first time in the fall 2018. The barometer aims to reveal the types of urban environments people in Finland value and wish to see developed. The survey was targeted at the residents of eight cities: Helsinki, Espoo, Vantaa, Tampere, Turku, Oulu, Jyväskylä and Kuopio. The data was collected by an online panel administered by CINT Ab during October 11–18, 2018. The number of respondents was 1,003 and the sample is representative of the 18–75-year-old population of the selected cities in terms of respondents’ age, gender and the size of each city. The results of the barometer and the themes related to urban development were discussed more at the YIT Sustainable Urban Environments seminar (November 1, 2018) organised for the sixth time. Urban development is at the heart of YIT’s strategy and business operations.

YIT Group consists of six business segments: Housing Finland and CEE, Housing Russia, Infrastructure Projects, Paving, Business Premises, and Partnership Properties. Our broad range of segments means that we build apartments and business premises as well as entire shopping centres, roads and infrastructure projects. What our business segments have in common is insightful urban development, which is how we want to differentiate ourselves. Our mission is to create a better living environment and realise our vision of bringing more life to sustainable cities.

By taking responsibility for the project development and implementation of Lauttis, YIT revitalised the old Lauttasaari shopping centre area and turned it into a vibrant city block. Lauttis combines good transport connections, the diverse services of the Lauttis shopping centre and comfortable apartments.