Westlake Tyres, manufactured by ZC Rubber  – the world’s 10th largest tyre maker and China’s biggest producer of rubber products – recently announced the forthcoming trip to Europe of some of its senior management, in a move intended to bring the company closer to its customers. Among others, the visiting committee will include Mr. Johnson Su, Westlake’s Import and Export Manager, and Mr. Nick Zhou, Westlake’s Regional Manager for the European Market and Oceania as well as some of the factory’s tyre engineers. During said trip, which will take the tyre manufacturer’s party from The

Infinity Tyres continues to support British sport and it has just secured a partnership with Acorn Motorsport Division (AMD) for the British Drift Championship (BDC) season, which this year will start on Saturday 21 April at the Teesside Autodrome. 2012 marks the event’s fifth year and it is the UK’s premier professional series. Proof of this is that entries to the championship are already at record levels, with drivers from all over Europe –including France, Sweden, The Netherlands, Italy, Portugal, Belgium or Ireland, to name a few– registering their intention to take part.Mr. Scott

Jorge Crespo, European General Manager for Infinity Tyres, announced that Infinity Tyres will hold its official international presentation of its new tyre range during 2012’s Infinity Partners Day, which this year will take place from 4 to 8 May in Beijing and Qingdao, China.  Mr. Crespo also said that, one month later, and following the International presentation in China, Infinity Tyres will stage the official European launch of the new range during the Reifen 2012 international trade show in Essen, Germany which will take place from 5-8 June 2012.  Mr. Crespo stated that: “We are

Following on from the forthcoming presentation of its new tyre range, Infinity Tyres have unveiled the outline of their new marketing and communications campaign for 2012. This campaign is built around Infinity’s brand philosophy concerning its unswerving policy of only producing excellent quality tyres, never compromising safety, and always offering superb tyre design. Mr. Jorge Crespo, European General Manager for Infinity Tyres, said that Infinity’s marketing aim is to “increase the very successful international media campaign Infinity runs in the various markets where it operates.

Infinity Tyres announces that it will enhance the INF 030 line with the newly-designed and greener Infinity Ecosis range, which will be formally launched during the next Infinity partners day to be held in China in May 2012 and will have is official European launch during the Reifen 2012 international trade show in Essen, Germany which will take place from 5-8 June 2012. The tyre model it will enhance is the INF 030, a great tyre range which continuously outperformed some of its rivals in categories such as mileage, rolling resistance and dry breaking distance.Infinity considered that

Infinity Tyres has been asked by the Brityrex International 2012 exhibition organisers ECI, and the show’s sponsors, the NTDA, to join members of the Steering Group for Brityrex International 2012, the UK’s premier tyre trade and aftermarket equipment show. The Steering Group’s objective is to provide initiatives and guidance in order to optimise attendance at Brityrex both for exhibitors and visitors. Their first meeting took place in central London, and was chaired by Mr. Peter Gaster of Kings Road Tyres, to great success. The meeting was also attended by Mr. Clive Mansfield, Sales

INFINITY TYRES WILL BE AT EXPOMÓVIL COMERCIAL 2012 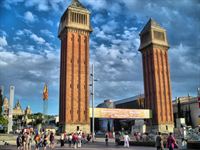 · Infinity Tyres will be present through Euro Tyre, their distributor in Spain and Portugal · Euro Tyre will have a 20 square meter stand where it will showcase Infinity’s range · The trade fair will run from 15 to 17 of March at the Fira de Barcelona exhibition centreInfinity Tyres will be at Barcelona’s first ever Expomóvil Comercial 2012 trade fair alongside its dealer for Spain and Portugal, Euro Tyre, who will be exhibiting a 20 square meter stand at the Spanish automotive event.  Expomóvil is a professional trade show aimed at the parts, accessories, equipment and automotive

Tyrecor, distributor of Infinity Tyres in South Africa, has confirmed that it will be present at the next Tyrexpo Africa 2012 show which takes place from the 6-8 March at the Sandton Convention Centre, South Africa's largest and most prestigious multi-purpose exhibition and convention centre, in Johannesburg. Tyrexpo is Southern Africa’s most established and international tyre trade event. Infinity Tyres will be showcasing its range during the show at Tyrecor’s stand, C06, and will use the opportunity to meet with clients and reinforce its relationship with them as well as other traders,

Infinity Tyres likes to think of itself as more than just a tyre brand because Infinity has never been just one thing, one product or one idea. Infinity Tyres has always aimed to be more than that. Infinity has worked very hard to create what it calls Infinity World. This is a world where we welcome everyone to become a part of the Infinity family. To join in our philosophy, to understand our principles, to follow our triumphs, in short, to become a part, however small, of who we are and who we aim to be.With this in mind, Infinity are proud to introduce the new Infinity LifeStyle

· Westlake Tyres will once again provide the event’s winning cup · The event will take place at the World-famous The Belfry Golf Club in August · Guests will play at the Brabazon Course, four-times host to the Ryder Cup  Westlake Tyres, manufactured by ZC Rubber  –the world’s 10th largest tyre maker and China’s biggest producer of rubber products– announces that 2012’s Westlake NTDA Annual Golf Day will take place on 2 August, and this year will take place at the prestigious The Belfry Golf Club, four times host of the Ryder Cup and several European Tour events. On this occasion,