Lancaster University is Switched On to New AMX Technology

Teaching staff and students at Lancaster University will be amongst the first in Europe to benefit from the very latest in AMX technology, following the recent installation of the highly anticipated Enova DGX. Ranked as one of the top ten universities in the UK and a centre for excellence in teaching and research, Lancaster has become the first university in the country to receive the multi award-winning digital matrix switcher. Originally built between 1965 and 1970, the Lancaster University campus occupies an impressive 360 acre parkland site at Bailrigg, just three miles from

With its unified approach to automation, the Enova range has quickly become a mainstay of the AMX portfolio and now integrators wanting to find out more about this award-winning product can do so by attending the new Enova Solutions Certification course. The ground-breaking Enova range combines all of the components needed to automate any environment into one simple, flexible, comprehensive solution; including control, multi-format inputs, video switching, transcoding and scaling, local and remote distribution, plus audio mixing, and amplification - all in a single box. The Enova

AMX®, the leading provider of control and automation solutions for the education sector is enhancing its SchoolView solution with the introduction of the AMX ResQ™ system. AMX ResQ delivers a new approach to school safety by giving teachers a small classroom-audio pendant with built-in panic-button for use in the event of a classroom threat or other emergency. The teacher-worn pendant, which integrates a quick-response transmitter and a microphone, also addresses another significant classroom issue by ensuring that students can hear the teacher’s voice from any location in the room. In

AMX®, the leading provider of unified control and automation solutions, has announced the immediate availability of the much anticipated Modero® X Series touchpanels. Offering an intuitive user experience and a truly ergonomic design, the Modero X Series family of frameless, panoramic and widescreen touchpanels redefines touchpanel technology by giving users a 'control surface' on which to perform multiple activities, all at the same time. The Modero X Series combines edge-2-edge glass, capacitive multi-touch and a low-profile to deliver a more usable space and a richly engaging user

AMX, the leading provider of unified control and automation, system-wide switching, audio and video signal distribution, digital signage and technology management solutions, will be at Integrated Systems Europe 2012 (31st January – 2nd February, Amsterdam RAI), to showcase the innovations that underpin the company’s success. Putting an emphasis on the importance of infrastructure, the company will be demonstrating how an unprecedented level of control capability can be realised around core AMX technology. At the heart of this approach is the company’s Enova range which combines all of

AMX to Give a Lesson in Control at BETT 2012

Those wanting to know how they can enhance teaching facilities and learning spaces with integrated technology should visit stand B59 at BETT 2012 (11-14 January, London Olympia) where leading provider AMX will be showcasing its range of award-winning solutions. Within a fully interactive classroom environment, visitors to the stand will be able to experience, first hand, how innovative AMX systems can control, automate, monitor and manage resources like never before; allowing for the seamless integration of technology into the lesson plan. Find out how lessons can be brought alive

AMX, the leading provider of unified control and automation solutions, has announced the immediate availability of its new ICSLan™ Device Control Boxes; two months before they were originally due to be shipped. These compact units let users connect devices not typically Ethernet-enabled, including projectors, displays, lighting and blinds, to an Ethernet network via a single standard twisted pair cable, for remote management using a NetLinx® Controller. Virtually any device controlled by IR, RS-232, I/O or relays can be connected to an IP network and managed, regardless of whether the

AMX, the leading manufacturer of unified control and automation solutions, has unveiled the groundbreaking new Modero X Series family of frameless, panoramic and widescreen touchpanels. Offering an intuitive user experience and a truly ergonomic design, the Modero X Series redefines touchpanel technology by giving users a new 'control surface' on which to perform multiple activities, all at the same time.  Putting a new perspective on the concept of touchpanel design, the Modero X Series combines edge-2-edge glass and a low-profile, to deliver a more usable space and a richly engaging

3RU AV Controller-Switcher- -Scaler-Pro-Grade Audio Mixer; Delivering Pure Digital HDMI/HDCP and Analogue Content over one Twisted Pair CableAMX, the leading manufacturer of unified control and automation solutions, has announced the Enova® DVX-3150HD ‘all-in-one’ presentation switcher. The Enova DVX-3150HD features advanced technology for end-to-end distribution of HDMI signals with full HDCP, without interruption or key constraints and with all the simplicity of analogue, using InstaGate Pro™ technology. The hybrid system is a complete solution for control, audio and video, all in a three 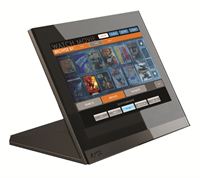