GL1 has once again joined in to take on the Swimathon challenge and encourage swimmers in the Gloucester area to take on Swimathon distance challenges as a team or as an individual to raise funds for Marie Curie.Held over the weekend of 17-19 April, Swimathon 2015 is expecting thousands of swimmers to take on the challenge and go that extra length to help support Marie Curie provide care for people with terminal illnesses across the UK. Marie Curie provides hours of health care as well as professionals to support them and their families through those tough times. After a year away, Marie 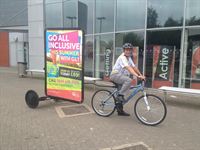 Steve Elway, Chief Executive at aspire Sports and Cultural Trust in Gloucester has set his sights on one goal - Getting Gloucester Active. His aim is to remind people in the city that fitness should be high on their agendaSteve is well aware of the fact that more emphasis needs to be placed on fitness and health in the community. A quick and easy way to spread the message involves dedicated members of aspire staff riding a promotional bike displaying the message and reaching as many people as possible. Naturally, Steve wanted to be the first to test-ride the bike, and he rather liked it.

Oxstalls Sports Park, Gloucester hosted the fourth Tennis Foundation Wheelchair Development Series event at the weekend.  The event is designed to act as the first stepping stone for those players who wish to compete in wheelchair tennis. As well as local players from Gloucester and Bristol, participants from all over the country including Wales, Jersey, Southampton and London competed. The weekend saw some excellent tennis with competitors including last year’s winner Steve Metcalfe , winner of the Development Series Final 2012 Steve Crompton and Pim Palmen, previously ranked in the

For Saturday’s singles final of the women’s $10,000 event, Oxstalls Sports Park welcomed The Right Worshipful Mayor of Gloucester Chris Chatterton and the Sheriff and Deputy Mayor of Gloucester Said Hansdot alongside other dignitaries and a large crowd of spectators. A number of Oxstalls Be Inpsired girls’ competitions had been organised throughout the week to promote girls’ tennis and compliment the women’s international ITF Pro Circuit tournament. The girls have had the opportunity to meet the professional players, and Bernarda Pera even presented the prizes for the mini orange and

The top seeded pairing of Britain’s Lucy Brown and Sweden’s Hilda Melander finished their week with a win in the doubles final at Oxstalls Sports Park. Up against the fourth seeds, Beth Askew & Katy Dunne, and in front of a great Gloucester crowd, the top seeds were playing together for the second time. Their first tournament together, a $10,000 in Austria last August, was a successful venture as the pair won the title, so they were aiming for two out of two here in Gloucester. The first set was very close, each pair holding serve comfortably and delighting the crowd with high quality

Quarter-finals day at Oxstalls Sports Park saw 19 year old Katy Dunne’s winning form continue as she booked her place in Friday’s semi-final. Facing Nora Niedmers of Germany, a lucky loser from qualifying, Dunne started well breaking serve in the first game. The 19 year old German fought back and the pair exchanged a couple of breaks with both playing high quality tennis. The young Brit served for the first set at 5-4 but soon found herself at 5-6 serving to stay in the first set. A love service game took the set to a tie break, and with the momentum swinging the way of Dunne, she took a

After day two of the main draw at Oxstalls Sports Park, Katy Dunne is flying the flag for the Brits, having reached the last eight. In her first year out of juniors Katy Dunne, a former top 9 world ranked junior, has already collected two singles titles as well as two doubles titles and climbed over 450 places in the WTA rankings in the last six months to reach a career high of 506. In Wednesday’s second round match against Katie Boulter, the current 10thranked junior player in the world, Dunne took charge of the match from the outset racing to a 5-0 lead and serving out the first set

The main draw of the women’s $10k got under way on Tuesday at Oxstalls Sports Park with all eight seeds progressing to the second round. The top seed, Japan’s Hiroko Kuwata who is currently enjoying a career high world ranking of 261, fought hard in the first set of her match against Britain’s Nicola George saving a set point at one stage. With one set under her belt the number one seed stretched her lead in the second set, breaking serve twice to win 75 62. Britain’s Jade Windley is the number two seed this week, and another player who is sitting at a career high ranking. The 23 year

One of GL1 Leisure Centre’s most committed members turns 80 this week, but she’s showing no signs of slowing down yet. Connie Smith joined GL1 in August 2012 and uses the Toning Suite and Xpress at GL1 functional gym, plus attending one or two group exercise classes, nearly every day. Discussing why she is so dedicated to her fitness, Connie says, “I started exercising after an accident which left me with 4 smashed vertebrae and 2 slipped discs. My doctor told me that if I didn’t regularly exercise I would end up in a wheelchair. “I really enjoy using the Toning Suite and Xpress 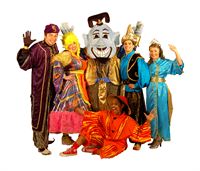 Take your children on a magic carpet ride to GL1 Leisure Centre on the 21stDecember to watch a genie-us production of Aladdin. GL1’s very first pantomime promises to be packed solid with comedy, excitement and adventure as the story takes the audience on a spectacular journey to the fantastical city of Old Peking. A brilliant cast of top children’s performers will entertain the audience from 3pm on Saturday, 21stDecember for this one-off production. Steve Elway, Chief Executive of Aspire Sports and Cultural Trust who operate GL1 Leisure Centre said: “We’re really excited to be 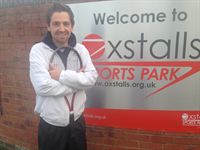 A Tennis Coach at Gloucester’s Oxstalls Sports Park has been given the impressive accolade of Aegon Coach of the Month by the Lawn Tennis Association (LTA). Steven Wigg was selected by the LTA Coaching Team as the tennis coach with the greatest impact on British Tennis in October. Talking about his award, Steven said: “Winning the Aegon Coach of the Month means a great deal to me. It was a huge honour just to be nominated! I’d like to thank all of the staff, coaches and players at Oxstalls Sports Park for their daily support and commitment.” Steven was nominated for his commitment

Even more on offer at GL1’s Toddler World

If you’re looking for a way to keep your toddler active now that Autumn is well-and-truly here, Toddler World at GL1 Leisure Centre in Gloucester could be it. Toddler World was launched earlier this year, providing a fun and interactive daily play session for under-fives and the equipment on offer such as a ball pond, soft play and bouncy castle has already proved very popular with parents and children alike. Starting this month, the team at GL1 have added a comprehensive diary of events to the daily Toddler World sessions. From monthly Sport and Activity Weeks including Martial Arts