Herning, Denmark, 6 January, 2022 – Everfuel, DRIVR and Toyota enter agreement on expanding the market for fuel-cell taxis.  The parties announce a five-year collaboration agreement that will scale the current number of fuel-cell taxis in Copenhagen, Denmark. Currently, over 100 of Toyota’s hydrogen cars, Mirai, are driving the streets of Copenhagen, as taxis at the Danish taxicab carrier, DRIVR. The three companies have a joint ambition of reaching 500 Mirais in Copenhagen by the end of 2025, and more than 200 by the end of 2022, which will significantly contribute to the 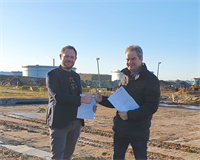 Herning, Denmark, 21 December 2021 – Everfuel A/S is pleased announce the signing of a heat offtake agreement with TVIS whereby surplus heat from green hydrogen production at the HySynergy electrolysers will be used to warm up homes and businesses connected to the local district heating network. The collaboration will initially provide green heating to the equivalent of 500-600 homes. “We are securing good cross-sector integration and potentially reduced production costs by connecting hydrogen production from the PtX facility with district heating. While the technology is proven, we are

Herning, Denmark, 17 December 2021 – Everfuel A/S is pleased to announce that the fully owned subsidiary Everfuel Deutschland GmbH has been awarded a contract by a German public organisation in the Frankfurt area for the provision of a hydrogen refuelling station and long-term hydrogen supply. The agreement includes a refuelling station, associated services and hydrogen delivery for a minimum of three years with potential extension for two additional years. The parties have agreed not to disclose the contract value. Closing date for submission of complaints is 10 days from today, and

Herning, Denmark, 16 December, 2021 - Everfuel is pleased to follow the publication of the new Power-to-X (PtX) and hydrogen strategy from the Danish Government. The strategy will play a significant role in making green hydrogen competitive and reduce the Danish CO2-emissions.Last night the Danish Government launched their PtX and hydrogen strategy with the ambition of significantly contributing to CO2-reductions in Denmark. The strategy is an important first step in making Denmark one of Europe’s leading nations within PtX and green hydrogen and in transforming hard to abate sectors.

Fredericia, Denmark, 11 November 2021 – Today the Danish Prime Minister, Mette Frederiksen, visited Crossbridge Energy A/S. A visit with a focus on jobs in the green industry of the future in Fredericia, and on the collaboration with Everfuel on the PtX-facility under construction. Crossbridge Energy A/S has stated a clear ambition of becoming a climate neutral refinery by 2035 – which will make the refinery a prime example of the green transition for the city of Fredericia to be proud of. A large share of that vision will be accomplished through the collaboration with Everfuel on the

Herning, 10 November 2021 – Everfuel A/S will release its financial results for the third quarter of 2021 on Tuesday, 16 November at 07:00 CET.  CEO Jacob Krogsgaard and CFO Anders Bertelsen will present the company's results at 09:00 CET and invite investors, analysts, and media to join the live webcast presentation. The presentation is expected to last up to one hour, including Q&A, and can be followed via live webcast.    Webcast:  Join the results webcast via the following link: Everfuel’s Third Quarter Presentation

Herning, Denmark, 10 November 2021 – Everfuel A/S now distributes green hydrogen from Siemens Gamesa’s pilot project in Brande, Denmark.   The project is the first to produce green hydrogen from wind in “island mode”, with the option of connecting it to the grid. The project now produces green hydrogen which is distributed by Everfuel as part of the commissioning phase. The locally produced hydrogen is distributed to Everfuel’s hydrogen refuelling stations and fuels the growing number of fuel-cell vehicles operating on a truly green fuel supply. “Demonstrating the entire value chain

Herning, Denmark, 31 August 2021 – The Danish Business Authority  today announced the qualification of two projects, both supported by Everfuel, for participation in its IPCEI state fund application, to be approved by the European Commission late 2021 or early 2022. IPCEI projects are large pan-European projects that address common European interests and generate positive spillover effects across the EU. A prerequisite for the IPCEI projects is state funding, and the Danish Government has allocated DKK 850 million to the Danish IPCEI projects. The projects and state funding endorse a

Herning, Denmark, 31 August 2021 - Everfuel has signed a strategic cooperation agreement with TECO 2030 for the delivery of green hydrogen to fuel TECO 2030's fuel cells and fuel cell-based power generators in remote areas. As part of the agreement, the companies will develop solutions enabling Everfuel to distribute and deliver green hydrogen to sites where TECO 2030’s hydrogen fuel cell power generators are located, or to ships, vehicles or equipment with TECO 2030’s fuel cells technology installed. The companies will focus particularly on exploring the possibility of providing

Fredericia, Denmark, 18 August 2021 - Today, Everfuel, Crossbridge Energy A/S and the Minister for Climate, Energy and Supply broke ground on what will become Europe’s largest Power-to-X plant; HySynergy. The HySynergy project will be the largest of its kind in Europe and will become a 20 MW electrolysis and Power-to-X plant during its first phase of operation. It is expected to be finished by summer 2022. It is expected that the plant will be expanded to 300 MW in 2025 during the second phase. HySynergy’s second phase will have the capacity to reduce the Danish land-based transport

Herning, Denmark, 18 August 2021 – Everfuel A/S and ASKO AS have entered a letter of Intent (LoI) for developing a joint coordinated plan for applying Enova for support to vehicle procurement and the establishment of green hydrogen infrastructure for decarbonizing heavy-duty long-haul trucking in Norway. ASKO is Norway’s largest grocery and catering wholesaler with an extensive domestic network of central and regional warehouses and a comprehensive logistics operation. ASKO is also a leading national cargo transporter, operating a fleet of about 700 large and medium-sized owned and

Everfuel to set up additional fueling station in Aarhus, Denmark

Herning, Denmark, 17 August 2021 – Everfuel has purchased a fueling station from Nel, to be installed in Aarhus in Denmark to serve a growing fleet of fuel cell taxis in the city. “We are excited to further expand the hydrogen infrastructure in Denmark based on fueling technology from Nel. The station will be a prototype of a moveable station, which is an important step to reduce installation time and cost to make hydrogen commercially competitive. This prototype of the Everfuel moveable station will take us in the right direction by enabling a faster installation with less civil works.

Herning, 12 August 2021 – Everfuel A/S will release its financial results for the second quarter and first half of 2021 on Thursday, 19 August at 07:30 CEST. CEO Jacob Krogsgaard and CFO Anders Bertelsen will present the company's results at 09:30 CEST and invite investors, analysts, and media to join the live webcast presentation. The presentation is expected to last up to one hour, including Q&A, and can be followed via live webcast.   Webcast: Join the results webcast via the following link: Everfuel Second Quarter 2021 Presentation

Herning, Denmark, 12 August 2021 – Everfuel A/S is pleased to announce that it has received the building permit for the HySynergy Phase I electrolyzer in Fredericia, Denmark, and the selection of CJ A/S as contractor.   The HySynergy development will establish large-scale production and storage of green hydrogen and contribute to reducing CO2-emissions in Europe. The facility will have a production capacity of about 8 tons per day of green hydrogen, made from renewable power, and 10 tons of storage capacity.  Everfuel is responsible for the EPC-work (engineering, procurement and

Everfuel and OKQ8 to cooperate on Swedish hydrogen station network

Herning, Denmark, 13 July 2021 – Everfuel Sweden AB, a fully owned subsidiary of Everfuel A/S and OKQ8 have entered into a cooperation agreement for joint development of the green hydrogen market in Sweden by establishing a network of H2 stations for zero-emission mobility in connection with existing and new OKQ8 service stations.   The hydrogen station network will target prime locations for intensive and heavy-duty customers, but it will also be open for passenger vehicles. The network will initially cover the larger cities and transport corridors between Stockholm, Malmoe and

Everfuel and Greenstat to collaborate on zero-emission mobility in Norway

Herning, Denmark, 5 July 2021 – Everfuel A/S and Greenstat AS have signed a cooperation agreement for developing commercially competitive hydrogen supply for zero-emission mobility by rail, road and sea in Norway. Both companies are founded on making green hydrogen commercially available by establishing robust value chains from production to end-users. Greenstat has a portfolio of attractive hydrogen production projects while Everfuel is expanding its production, distribution and network of hydrogen fueling stations. The parties have identified multiple projects that they are actively

Herning, Denmark, 21 June 2021 – Everfuel A/S is pleased to announce that the company’s HySynergy Phase II electrolyser development in Fredericia is one of six projects nominated by the Danish Business Authority for participation in a large-scale EU funding project to kick-start a European market for green hydrogen and contribute to the green transition across sectors and industries. Everfuel is also a project participant in two of the other nominated projects, Blue Seal and Green Fuels for Denmark. The pan-European Important Project of Common European Interest (IPCEI) aims to contribute

Herning, Denmark, 16 June 2021 – Everfuel A/S today announced the grant of warrants to executive management and other employees to support long-term employee alignment, commitment and motivation to unlock hydrogen at scale through potential shared ownership. Members of executive management and other employees as of 31 March 2021 were eligible for the grant which was made by the Board of Directors under an authorization approved by the Annual General Meeting. A total of 185,685 warrants in the company were granted, without payment of any consideration. Each warrant gives the right to

Herning, Denmark, 10 June 2021 – Everfuel A/S today assumed ownership and operation of the hydrogen fueling station at Hvam, northeast of Oslo, Norway, as the first of two fueling sites acquired in November 2020. This is Everfuel’s first hydrogen station in Norway and an important step in realizing the company’s green hydrogen fueling strategy for trucks, buses and cars connecting the main traffic corridors in Scandinavia. The Hvam station has in recent weeks been tested and customers are now invited to take part in continued testing of various systems including payment solutions and 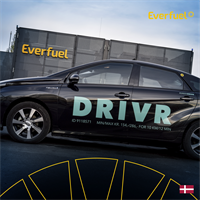