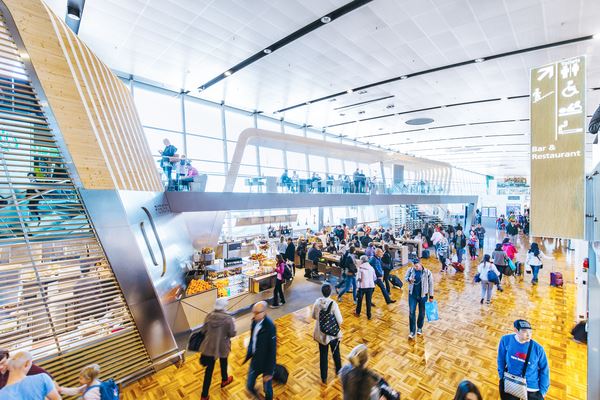 The 2018 Airport Food and Beverage (FAB) Conference & Awards took place in Helsinki on 20-21 June. Finavia, the host of this year's event which was organized for the first time in Finland, turned out to be victorious again with its #LIFEINHEL campaign bringing home the prize of The F&B Marketing Campaign of the Year.

“As one of the leading Europe-Asia hubs, we have tough competition. Helsinki Airport’s F&B offering with strong emotion, originality and a variety of concepts to experience Finnishness is considered as one of the key strategic competitive assets we are proud to present. We provide our passengers ´one HEL of a sneak peek` into Finland”, told Elena Stenholm, Commercial Director and Vice President of Finavia at Helsinki Airport shortly after receiving the award.

Martin Moodie, a FAB Jury Member, the Chairman and the Founder of the Moodie Davitt Report which is the organizer of the FAB event, wrote earlier in his blog post : “The oft-stated criticism that airports too often look the same certainly doesn’t apply here [at the Helsinki Airport].”

As expected, Finavia’s #LIFEINHEL took the award for the F&B Marketing Campaign of the Year. However, this was the first time the campaign was recognized for its merits in promoting Helsinki Airport’s F&B offer.

“People have been stuck at airports throughout history; there’s even a movie about it. In #LIFEINHEL, a Chinese man lived inside Helsinki Airport for 30 days testing its services . Food & Beverage played a key role as regards experiencing well-being, emotions and sense of place, and was successfully implemented to the campaign jointly with our key operators and partners SSP and HMSHost. Helsinki Airport restaurants and cafés were visible in almost all of the episodes as well as in other daily social media content resulting in a whopping total media coverage of 2.3 billion people”, Stenholm tells.

Before the FAB’s F&B Marketing Campaign of the Year award, the #LIFINHEL campaign had already received 14 different acknowledgements. The year started with two Moodies. Now, just before the 2018 FAB Awards ceremony, the campaign got a bronze lion in Cannes Lions.

The merits of the campaign have included, for example: increasing awareness not only for Helsinki Airport’s offer, but also for Helsinki and Finland as a travel destination, building customer experience in an unforeseen way and communicating the attributes and provenance of airport products and services successfully, all in an imaginative and truly effective way. The FAB jury also pointed out that clear objectives with measurable targets and a detailed evaluation were considered fundamental to the success of the #LIFEINHEL campaign when they decided on the winner.

Finavia provides and develops airport services with a focus on safety, customer-orientation and cost efficiency in Finland. Finavia’s comprehensive network of 21 airports enables international connections from Finland — and to areas throughout Finland. Helsinki Airport is the leading Northern European transit airport for long-haul traffic. In 2017, corporate revenue totalled MEUR 374 and the number of employees was 2,700. www.finavia.fi