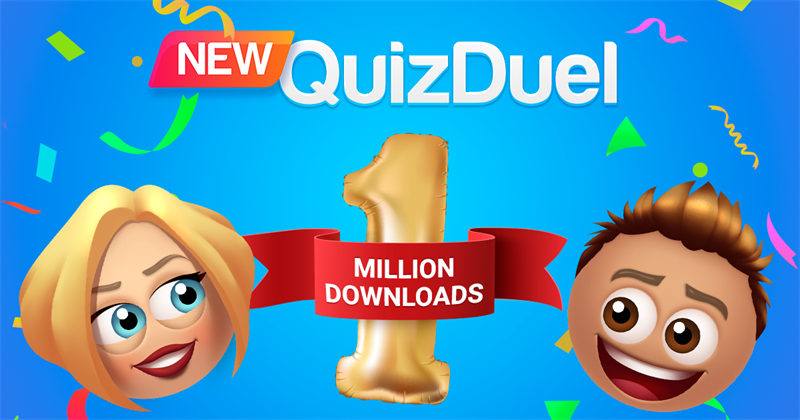 Successful takeoff for the sequel to the classic quiz game

Stockholm, Sweden - 19 May 2020 - MAG Interactive is happy to announce today that New QuizDuel - the sequel to the classic trivia game QuizDuel - has passed 1 million downloads.

New QuizDuel was first released in Sweden in November 2019 and was followed soon after by releases in Germany, Italy and France. The game finally launched worldwide on May 5th, 2020. New QuizDuel has since reached a stable position on the top mobile games list in Germany and continues to grow steadily in a large number of markets in Europe.

“It’s amazing to reach a million downloads, but our vision is of course much bigger than that. As the user base has grown, we’ve managed to maintain strong KPIs in New QuizDuel, which is great. That displays a significant development potential in the game that we believe will become even more obvious in the future”, says Pär Hedelund, Project Lead of New QuizDuel.

New QuizDuel introduced both the new “Arena” game mode - which allows five people to compete simultaneously to climb leaderboards in clever new categories - as well as a revamped in-game economy.

The new game mode has had a strong initial effect on daily earnings and average play time. New QuizDuel shows a significantly higher ARPDAU - average revenue per daily active user - than classic QuizDuel. The company has also experienced an 84% increase in play time and 43% longer gaming sessions in New QuizDuel, compared to the classic game. Additionally, the proportion of players making in-app purchases has increased substantially compared to QuizDuel.

MAG has begun migrating players from QuizDuel to New QuizDuel; this will continue to be the company's main goal with the new game throughout 2020. Cross-promotion of New QuizDuel in QuizDuel has been the most effective tool to attract players to the new version of the game.

“The potential we have been looking forward to and hoping for with New QuizDuel is starting to materialize. Our ambition is to become a world leader in trivia by continuing to develop the base game, adding new features, and at the same time continuing to migrate QuizDuel players to the new app”, says Daniel Hasselberg, CEO of MAG Interactive.

QuizDuel has been very successful since the game's launch in 2012. It has been downloaded over 100 million times and has a daily player base of over one million worldwide. The game has also resulted in a television spin-off in Germany, currently running its sixth season. In addition to its success in the trivia market, QuizDuel, according to the analysis company App Annie, was the biggest overall mobile game in Germany in February 2020 in terms of number of active players.

New QuizDuel is available on global markets to download and play for free in the App Store and Google Play.

About QuizDuel
QuizDuel is a clever and entertaining social quiz game where you can challenge your friends and random opponents to exciting head-to-head games of trivia, and learn amazing new facts. The players face off in games of six rounds with three trivia questions in categories such as history, music, sports, food, film, TV, politics, literature and geography, among others. With over 100 million downloads and more than one million players every day, QuizDuel is the largest trivia game for mobile smart phones in Europe.

About MAG Interactive
Founded in 2010, MAG Interactive is a global developer of casual social games for smart mobile phones. The portfolio consists of games that have been collectively downloaded over 250 million times. From MAG’s diverse catalog of games, the most well known titles are Ruzzle, Word Domination, WordBrain and QuizDuel. Revenue is mainly derived from in-app purchases and advertisements. MAG has offices in Stockholm and Brighton and the company is listed on Nasdaq First North Premier Growth Market with the ticker MAGI. FNCA Sweden AB is appointed Certified Advisor to MAG Interactive. Email: info@fnca.se. Telephone: +46 (0)8-528 00 399. For more information visit www.maginteractive.com.