Scandic is the largest Nordic hotel operator with a network of about 280 hotels with 58,000 hotel rooms in operation and under development in six countries. Scandic Friends is the biggest loyalty program in the Nordic hotel sector. Corporate responsibility has always been a part of Scandic’s DNA. Since December 2, 2015, Scandic has been listed on Nasdaq Stockholm.

In November, Scandic’s average occupancy rate was approximately 20 percent due to extremely weak demand in all markets. Recently intensified rent negotiations have thus far led to agreements for rent reductions and offers for rent reductions from landlords totaling approximately 500 MSEK.In November, Scandic’s average occupancy rate was approximately 20 percent, a decline compared with 36 percent during the third quarter and 33 percent in October. In November, market RevPAR is estimated to have gone down between 68 and 74 in the Nordic countries. Demand has been weak in all markets due to

Scandic to take over hotel at Stockholm Arlanda Airport

Scandic has signed an agreement to take over the operation of a 150-room hotel at Arlandastad in close proximity to Stockholm Arlanda Airport and with direct access to the new international meeting and event center, Scandinavian XPO.Scandic has reached an agreement with property owner Arlandastad Holding regarding a 15-year lease agreement for the former First Hotel Arlanda. The hotel was built in 2015 but has been closed in recent months following the bankruptcy of the hotel operator. Scandic expects to open the hotel on January 10, 2021 under the name Scandic Arlandastad. Since the

Third quarter in summary · Net sales decreased by 60 percent to 2,085 MSEK (5,195). · Occupancy was 36 percent, (75.5) less than half of what it was during Q3 2019. · Adjusted EBITDA was 90 MSEK (823). The decrease in earnings was mitigated by direct government support of 371 MSEK as well as low operating costs. · Excluding the effects of IFRS 16 and items affecting comparability, earnings per share amounted to -0.77 SEK (4.28). · Items affecting comparability amounted to -70 MSEK, related to staff reductions in Norway and Denmark. · At the end of the quarter, Scandic’s

Today, Scandic is pleased to announce that it has strengthened its commercial operations by hiring Anna Spjuth as Chief Commercial Officer. Anna will start on October 1, 2020 and will be a member of Scandic’s Executive Committee.To sharpen Scandic’s commercial focus, the company has appointed Anna Spjuth as Chief Commercial Officer (CCO). Anna has solid experience from working in the Nordic hotel industry. Most recently, she was Senior Vice President at Comfort Hotel, part of the Nordic Choice Group, where she successfully managed the company’s commercial strategy, concept development and

The annual general meeting of Scandic was held on Monday 15 June 2020 in Stockholm, Sweden. The meeting resolved in accordance with all proposals presented by the board of directors and the nomination committee.Annual report, dividend and discharge from liabilityThe annual general meeting resolved to adopt the annual report and the consolidated annual report for the financial year 2019. The meeting further resolved, in accordance with the board of directors’ proposal, that no dividend shall be paid to the shareholders and that the amount at the meeting’s disposal shall be carried forward.

Today, Scandic is publishing its Annual and Sustainability Report 2018. It can be downloaded from www.scandichotelsgroup.com. Printed copies will be available on request from April 26. Please contact ir@scandichotels.com.  This information is information that Scandic Hotels Group AB is obliged to make public pursuant to the Securities Markets Act. The information was submitted for publication at 16.30 CET on April 12, 2019.  For more information, please contact:Henrik Vikström, Director Investor Relations, Scandic Hotels GroupEmail: henrik.vikstrom@scandichotels.comPhone:

Scandic Hotels Group will present its year-end report for 2018 in a webcast at 9.00 CET on February 19, 2019. The report will be published at 7.30 CET on the same day.Scandic’s CFO Jan Johansson will present the report together with President & CEO Jens Mathiesen in a webcast and telephone conference. The presentation will be held in English. Time: Tuesday, February 19, 2019 at 09:00 CETLocation: Webcast and telephone conferenceTelephone numbers: SE: +46850558350 UK: +443333009032  Please call in 5 minutes before the start. You can view the webcast at scandichotelsgroup.com (

Søren Faerber has been appointed as Managing Director of Scandic Denmark. He will start immediately and will also be a member of Scandic’s Executive Committee. Søren is 48 years old and has many years of experience from management positions in Scandic’s Danish operations.Søren has been a part of Scandic’s management team in Denmark since 2006 and has worked as district manager for the Copenhagen region for the last four years.   - Søren has extensive knowledge of the Danish market and has successfully managed our operations in the Copenhagen region where we currently have 12 hotels in

Scandic Hotels Group AB (publ) changes President and CEO - Jens Mathiesen replaces Even Frydenberg. In connection with this, Scandic comments on its financial performance in the fourth quarter.

The Board of Directors and CEO Even Frydenberg of Scandic Hotels Group AB (publ) have agreed that Even Frydenberg will leave his position as President and CEO of the company.The Board of Directors has resolved to appoint Jens Mathiesen as the new President and CEO. Jens Mathiesen is a member of Scandic’s Executive Committee and has successfully held the position of Country Managing Director Scandic Denmark since 2008. “The Board of Directors has arrived at the conclusion that Scandic needs new leadership, so it’s natural for us to part ways. I want to emphasize that this is a leadership

Scandic Hotels, the largest hotel company in the Nordic countries, has signed a long-term lease agreement with developers Art-Invest Real Estate and Accumulata Real Estate regarding the operation of a new hotel, Scandic Munich Macherei.The hotel will be part of the new area “Macherei”, which will undergo a total transformation, from current industry area to an urban and vibrant neighborhood with space for art and culture, modern offices and open meeting and communication zones. It is located close to the city center and well-connected to the airport and the Neue Messe München exhibition

Third quarter in summary · Net sales rose by 22.6% to 4,874 MSEK (3,974), driven by more rooms in operation, including the acquisition of Restel, as well as positive currency effects. For comparable units, growth in net sales was 0.3%. · Adjusted EBITDA increased to 736 MSEK (622), corresponding to a margin of 15.1% (15.7). · Restel contributed 84 MSEK to adjusted EBITDA corresponding to a margin of 14.7%. · Earnings per share amounted to 3.83 SEK (3.65). Excluding the effect of finance leases and currency effects from the revaluation of loans, earnings per share totaled 3.89

Scandic Hotels Group will present its interim report for the third quarter 2018 in a webcast at 9.00 CET on October 25, 2018. The report will be published at 7.30 CET on the same day.Scandic’s President & CEO Even Frydenberg will present the report together with CFO Jan Johansson in a webcast and telephone conference.  The presentation will be held in English. Time: Thursday, October 25, 2018 at 09:00 CETLocation: Webcast and telephone conferenceTelephone numbers: SE: +46856642664 UK: +442030089808   Please call in 5 minutes before the start. You can view the webcast at

Scandic Hotels has signed a long-term lease agreement with Bane NOR Eiendom and Utstillingsplassen Eiendom to operate a new hotel in the Nyhavna area of Trondheim. The hotel will be the city’s largest conference hotel with 425 rooms and conference facilities covering close to 4,000 m2. The hotel is expected to open in 2022.- Establishing Trondheim’s largest hotel will create an attractive meeting place for the city’s inhabitants and visitors alike. Trondheim has great potential as a conference destination, in part because of its location ‘in the middle of Norway’ and its excellent air

Scandic’s operations in Finland to be reported in a separate business segment following the acquisition of Restel.As a result of the acquisition of Restel in Finland, Scandic’s Finnish operations will be reported as a separate business segment from January 1, 2018. The segment Other Europe will then include Denmark, Germany and Poland. All other segments will remain unchanged. Below is a link to Scandic’s net sales and adjusted EBITDA per quarter for 2017 based on the new reporting structure. Scandic will begin reporting according to the new structure in connection with the interim

Scandic has established a Swedish Commercial Paper Program with a total value of 2,000 MSEK.The tenure of issued commercial papers will be between three months and one year. The program will mainly be used for short-term financing of working capital needs and will replace other short-term financing and is estimated to reduce Scandic’s financing costs. The issuer and paying agent for the program is DNB and issuing institutions are DNB, Nordea and Handelsbanken.   For more information, please contact: Henrik Vikström, Director Investor RelationsEmail: henrik.vikstrom@

Today, December 29, Scandic completed the acquisition of Restel’s hotel operations in Finland.On June 21, 2017, Scandic announced the acquisition of Restel’s hotel operations in Finland. On December 5, the transaction was approved by the Finnish Competition and Consumer Authority subject to the divestment of one hotel in Lahti, one in Pori and one in Kuopio. Additionally, Scandic has committed not to participate in certain announced hotel projects in Lappeenranta and Vantaa.  On a pro forma basis, if the acquisition had been carried out on January 1, 2016, the acquired operations would

Scandic to open new hotel at Landvetter Airport in Gothenburg 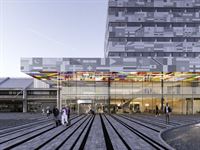 – new establishment will be the company’s ninth airport hotel in the NordicsScandic Hotels, the leading hotel company in the Nordic countries, has signed an agreement with Swedavia regarding the operation of a new hotel at Landvetter Airport in Gothenburg. The hotel will be Scandic’s ninth airport hotel in the Nordic region and is expected to be completed in 2020. The hotel at Landvetter Airport is the second large project in Gothenburg that Scandic has announced during the spring of 2017. When it is finished, the hotel will have seven floors with approximately 220 rooms, a restaurant,

Today, Scandic is publishing its Annual Report for 2016. The report is available on the website.  The annual report, which also includes sustainability report, can be found at http://www.scandichotelsgroup.com/en/financial-reports. Printed copies will be available on request from May 6, 2017. Please contact ir@scandichotels.com.   Scandic Hotels Group (publ) is required to publish this information under the Swedish Securities Market Act and/or Financial Instruments Trading Act. The information was submitted for publication April 19, 2017 at 13:00 CET. For further information,

The shareholders of Scandic Hotels Group AB (556703-1702) are hereby invited to participate in the annual general meeting to be held on Wednesday, May 10, 2017 at 1 p.m. at Scandic Continental, Vasagatan 22, SE-111 20 Stockholm, Sweden. Registration commences at 12.00 (noon). Registration and notification Shareholders who wish to participate in the annual general meeting must ·  be recorded in the share register kept by Euroclear Sweden AB on Thursday, May 4, 2017, and ·  give notice to the company of their intent to participate not later than on Thursday, May 4, 2017.