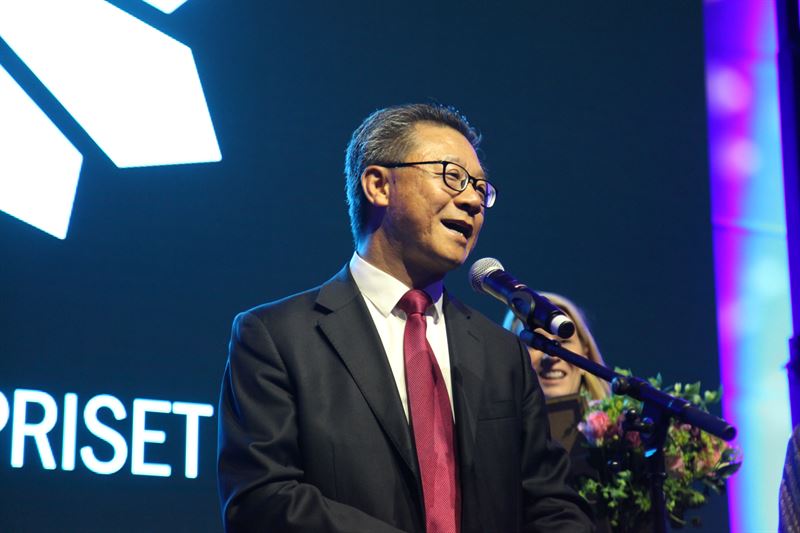 The Swedish Environmental Protection Agency has awarded HYBRIT its Environmental Goals Prize for "Boldness and momentum". This initiative, conceived by SSAB, LKAB and Vattenfall, plans to produce fossil free steel by replacing coal with fossil-free electricity and hydrogen. The by-product from steelmaking will then be water rather than carbon dioxide.

Martin Pei, chairman at Hybrit Development and executive vice president and CTO at SSAB, was present to receive the prize during the conference "Miljömålsdagarna" in Karlskrona, Sweden.

"With HYBRIT, SSAB, LKAB and Vattenfall are showing that it is possible to change the steel industry. But it requires boldness, innovation and urgency. That is why it feels fantastic that HYBRIT is being recognized in this way. We are already seeing how several steel companies throughout the world have started venturing to see the possibilities and maybe follow our example. I should say that the whole of Sweden and the world are the winners of this prize, as this new technology will enable us to reduce Sweden's carbon dioxide emissions by 10% and Finland's by 7%, and can potentially lower emissions in other parts of the world too," Pei says.

The iron and steel industry is responsible for 7 percent of carbon dioxide emissions globally, and is thus one of the industries with the highest emissions. World population growth and urbanization are expected to lead to an increase in global demand for steel. It is against this background that SSAB, LKAB and Vattenfall have created HYBRIT, with the aim of developing the world's first fossil-fuel free ore-based steelmaking technology. By using fossil-fuel free electricity and hydrogen for steelmaking instead of coke and coal, the by-product will be water instead of carbon dioxide. The HYBRIT initiative has received financial support from the Swedish Energy Agency.

"They have shouldered the enormous challenge of changing Swedish steel production to make it completely fossil free. With a groundbreaking new approach and great courage, the initiative has shown there to be no impediment to producing steel with hydrogen instead of coal. Not only may the project come will change Swedish steelmaking, which is responsible for 10% of Sweden's greenhouse gas emissions, it also has the potential to disseminate this technology globally and cut a substantial proportion of the world's climate-impacting emissions. The HYBRIT initiative is a trailblazer in the true sense of the word!

SSAB is a Nordic and US-based steel company. SSAB offers value added products and servicesdeveloped in close cooperation with its customers to create a stronger, lighter and more sustainableworld. SSAB has employees in over 50 countries. SSAB has production facilities in Sweden, Finlandand the US. SSAB is listed on the Nasdaq OMX Nordic Exchange in Stockholm and has asecondary listing on the Nasdaq OMX in Helsinki. www.ssab.com